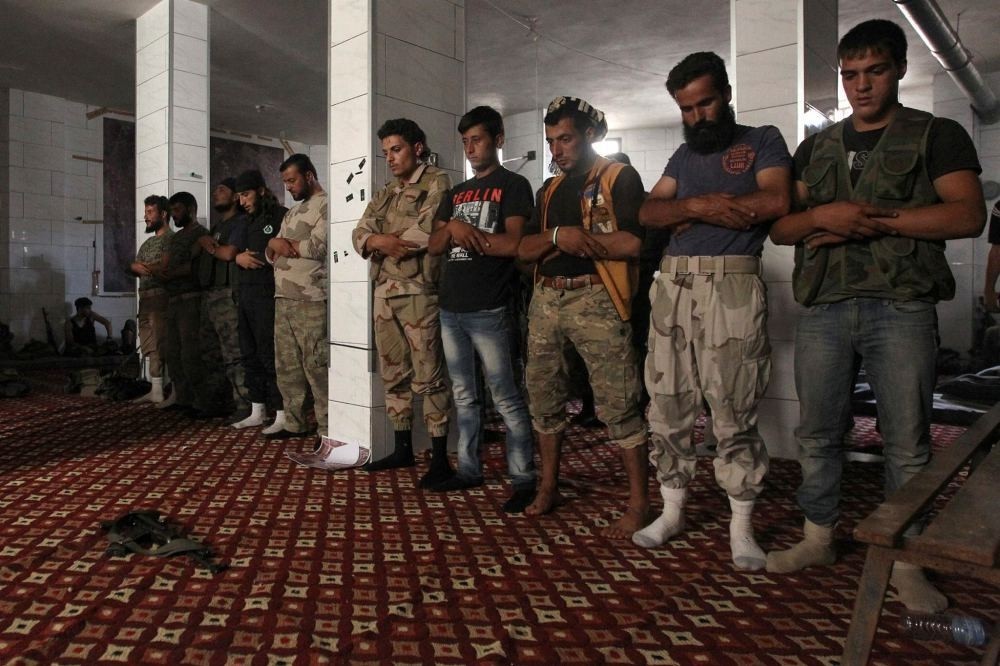 Opposition fighters pray in a safe house in Aleppo during the assault.
by Compiled from Wire Services Aug 02, 2016 12:00 am

Syrian opposition groups, including Jabhat Fatah al-Sham and Ahrar al-Sham, have launched a major assault to break the siege while a Russian helicopter was shot down, killing all five crew onboard

Syrian opposition fighters have launched a major assault on government-held southwestern parts of Aleppo to try to reopen supply lines after the army and its allies tightened their siege of opposition-held parts of the city last week. The rebels are trying to break through the strip of government-controlled territory in the hope of reconnecting their encircled sector of eastern Aleppo with a swathe of insurgent territory in the west of Syria. An opposition military command center that includes the newly formed group, Jabhat Fatah al Sham, formerly the al-Qaida-linked Nusra Front, and Ahrar al-Sham said they had seized army positions in the first few hours of the assault, which began on Sunday night. The army confirmed on state media that rebels had begun an offensive but said its fighters had pushed them back from an air force artillery base.

A quarter of a million civilians still live in Aleppo's opposition-controlled eastern neighborhoods, effectively under siege since the army, aided by Iranian-backed militias, cut off the last road into rebel districts in early July. The army last week took significant ground on the northern edge of the city, around the Castello road, which leads north towards Turkey. The British-based Syrian Observatory for Human Rights said the rebel assault was their biggest for several months. The monitoring group, which tracks violence across Syria, said pro-government jets had bombed rebel-held Khan Touman in the southern countryside of Aleppo, and opposition fighters had shelled government-held parts of central Aleppo overnight. However, a Syrian military official said government forces have repelled the attack.

Aleppo, Syria's biggest city before the outbreak of the conflict five years ago, has been divided between government forces and rebels since the summer of 2012. Seizing full control would be the biggest victory for Syria's Bashar Assad in five years of fighting, and demonstrate the dramatic shift of fortunes in his favor since Moscow joined the war on his side last year. Assad's government and its Russian allies declared a joint humanitarian operation for the besieged area on Thursday, bombarding it with leaflets telling fighters to surrender and civilians to leave. But the United Nations raised misgivings about the plan and U.S. officials suggested it might be an attempt to depopulate the city so that the army can seize it.

A Russian transport helicopter was shot down in opposition rebel territory in northern Syria on Monday and all five crew and officers onboard were killed, the Kremlin said, in the deadliest single incident for the Russian military since its involvement in Syria's civil war. The Mi-8 helicopter was shot down in Idlib province while returning to the Russian air base on Syria's coast, the Defense Ministry said. The helicopter had three crew members and two officers deployed with the Russian center at the Hemeimeem air base on the Syrian coast. "From what we know from information provided by the Defense Ministry, all those who were on the helicopter died," Russian President Vladimir Putin's spokesman told journalists. The ministry statement released earlier said their fate was still unknown. Putin's spokesman, Dmitry Peskov, said the Russians "died heroically because they tried to move the aircraft away so to minimize losses on the ground." There was no immediate claim of responsibility for the attack.

Videos uploaded online by Syrian opposition activists show the burning wreckage of a Russian helicopter in footage seemingly taken in the first few moments after the helicopter crashed. In one video, a rocket pod can be seen next to the wreckage. People standing nearby are seen taking cellphone photos. The helicopter appears to have broken up as it crashed, its tail can be seen lying separately from the aircraft's body in flames. In other videos, the body of one purported Russian soldier is seen being dragged by the legs while an unidentified person stands on the body of another soldier, also purportedly Russian.
RELATED TOPICS