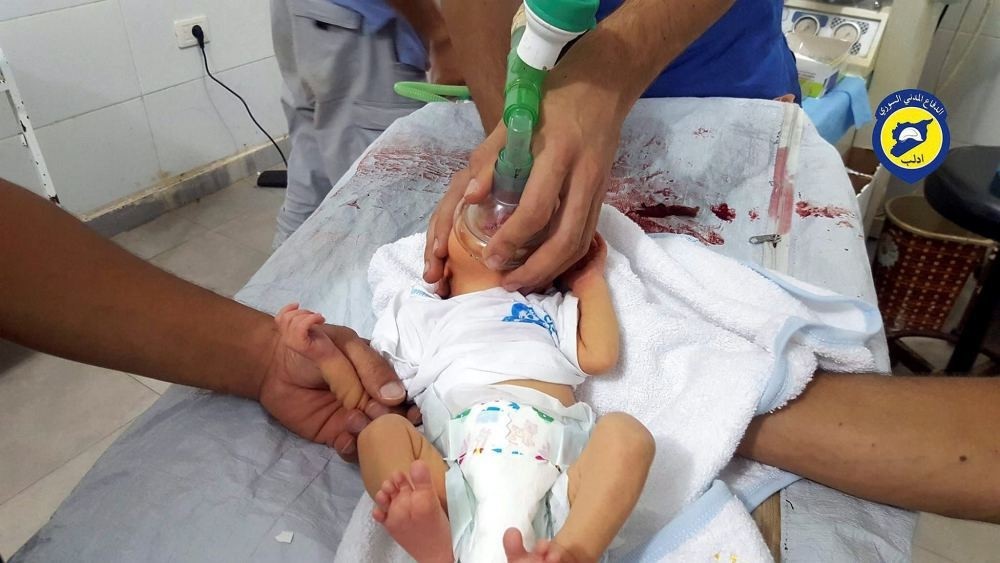 A rescue worker treats an infant who was affected by a chlorine gas attack dropped by regime warplane.
by Compiled from Wire Services Aug 04, 2016 12:00 am

Syrian opposition groups have accused the regime of using chemical weapons in Aleppo on civilians while tensions between Russia and the U.S. have increased since Moscow is directly involved in the Aleppo siege

Syrian opposition groups accused government forces of launching toxic gas attacks on civilians in a town southwest of Aleppo on Tuesday. Opposition sources provided video of people receiving treatment who they say were among the victims of a gas attack. The accusations came amid heightened fighting around the contested northern city that killed at least 20 people, activists and government media reported. Rescuers and doctors in opposition-held Saraqib, a town in the northwestern Idlib province, about 40 kilometers (25 miles) southwest of Aleppo, reported dozens of cases of severe breathing difficulties, saying the symptoms pointed to a chlorine gas attack.

A neurologist, Dr. Ibrahim al-Assad, said he treated 16 of the 29 cases brought to his hospital on Monday night, most of whom were women and children. One elderly man needed critical care but most of the casualties were suffering from breathing difficulties, red eyes and wheezing, al-Assad said. He said first responders smelled the gas at the site of the bomb attack, which he described as a busy shopping area near an ice cream shop. Opposition groups and activists have reported chlorine gas attacks in the town before, but the lack of chemical labs or independent testers makes it difficult to verify these claims. The government denies that is has launched chlorine gas attacks.

Moscow on Tuesday blasted criticism by Washington over its actions in Syria, saying it was "unacceptable" to demand restraint around Aleppo. "As soon as there is real headway in fighting terrorists, made by the Syrian government and army with our support, the Americans started... demanding that we stop fighting terrorists," Deputy Foreign Minister Sergei Ryabkov told RIA-Novosti agency. Britain-based monitors reported that Russia launched heavy air strikes in the Aleppo outskirts, slowing a last-ditch effort by opposition groups to break the siege. U.S. Secretary of State John Kerry on Monday called on Russia and its Damascus ally to refrain "from conducting offensive operations" in Aleppo, where regime forces surrounded opposition-held districts. Kerry said the attacks prevented the warring parties from meeting Monday, the target date set by the international community for the regime and opposition to agree on the framework for political transition. "We will see in the course of the next hours, few days, whether or not that dynamic can be changed," Kerry said. Ryabkov however rejected such talk as an ultimatum. "To hear from Washington that... the next hours and days will be decisive, that is an ultimatum-like, unacceptable tone. I think this is regular blackmail that is common to the Americans," said Ryabkov.

Fighting has intensified around Aleppo and its neighboring provinces since the government sealed off the final route into opposition-controlled neighborhoods of the city. The United Nations said the encirclement of opposition-held areas of deeply divided Aleppo traps nearly 300,000 residents, making it the largest besieged area in war-torn Syria. The opposition groups have launched a counteroffensive, clashing with government forces on a number of fronts. They detonated at least one large tunnel bomb underneath a government position on the southern outskirts of Aleppo on Tuesday evening, in a renewed attempt to break the government's siege on the city's east. The Syrian Observatory for Human Rights, a Britain-based monitoring group, said fighters were killed on both sides in battles around the southern al-Ramouseh and al-Amerieh neighborhoods of the city, but did not have exact figures. Several opposition factions, including the Levant Conquest Front, formerly known as the Nusra Front and linked to al-Qaida, announced they had taken government positions there and killed soldiers.

The Observatory said at least 11 people, including five children, were killed when bombs were dropped in a market in the opposition-held town of Atareb. The activist-run Aleppo Media Center said the death toll was 20, posting pictures of destroyed buildings and civilians searching for survivors. On Tuesday, residents of the opposition-held parts of Aleppo returned to burning tires, sending up big plumes of black smoke in the hope of preventing airstrikes. But anti-government activists and residents reported that airstrikes and unguided barrel bombs hit various parts of the city. At least one person was killed in al-Sukkari neighborhood, according to the activist-operated Local Coordination Committees. On social media, opposition fighters asked residents to stay indoors and away from front lines.
RELATED TOPICS