Amid clashes in Hasakeh, YPG cuts only way out from regime-held Aleppo 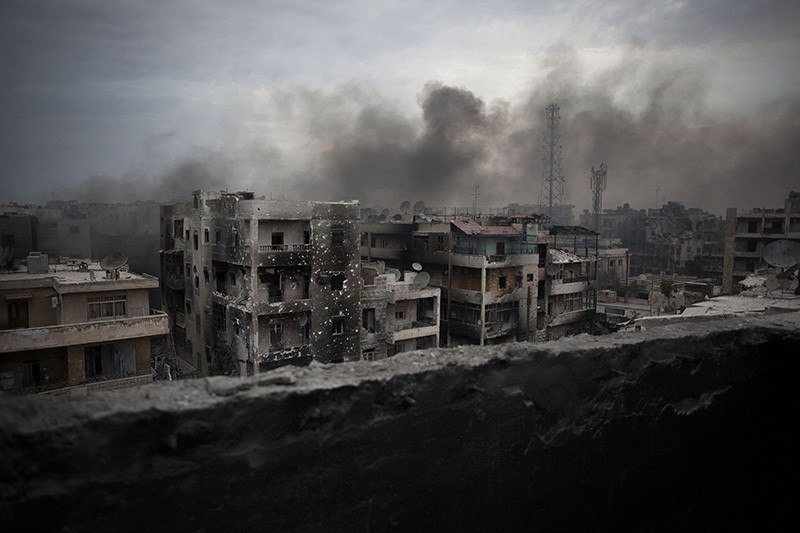 In this Oct. 2, 2012 file photo, smoke rises over Saif Al Dawla district, in Aleppo, Syria. With rebels and regime forces each promising to unite the divided city, Aleppo is once again a main battlefield in Syria's devastating civil war. (AP Photo)
by Daily Sabah with Agencies Aug 22, 2016 12:00 am

Following a short lived ceasefire during negotiations, clashes between the Syrian regime forces and the People's Protection Units (YPG) resumed on Monday, while some 320 kilometers west, the YPG militia moved to cu0t the only connection of Aleppo's regime-held parts with the rest of the world, a move that might force the regime to back out.

YPG forces moved to block Castello Road located in the north of the city, which became the only route for the regime to supply western Aleppo after opposition forces broke through the regime's siege from the south in early August.

The road was being used by the opposition to supply eastern parts of the city after the regime and YPG joined forces to cut through the main supply line stretching from the Turkish border by capturing the town of Tall Rifaat in February. In July, another regime attack coordinated with the YPG blocked the road and put eastern Aleppo under regime siege.

Meanwhile in the east, a Syrian Kurdish news agency says clashes have erupted again between YPG and Syrian pro-regime militias in the northern Syrian city of Hasakeh, where two groups have shared control of the city since the early years of the Syrian civil war.

Regime planes bombed Kurdish positions in Hasakeh last week as the struggle for predominance in the city escalated. The clashes had calmed Sunday amid news of a possible truce.

Syrian regime's military said Sunday a truce deal has been reached with the YPG in Hasakeh, but a Kurdish source said it has yet to be finalized.

In a bid to calm tensions, a delegation of Russian officials from the coastal Khmeimim military airport arrived in the nearby city of Qamishli on Saturday for talks with the two sides.

A military source told AFP the deal was struck between regime forces and Kurdish fighters after two days of mediation by regime ally Russia.

The three-point agreement calls for a "halt to all hostilities and the return to regime forces of any positions seized by Kurdish fighters" since Wednesday, the Syrian military source said. It also stipulates that casualties would be transferred north to Qamishli. The military source said additional negotiations would take place on Monday.

However, a Kurdish military source told AFP from Hasakeh that none of the three points had been agreed.

"No agreement has been reached on a ceasefire or the return of positions to the regime," said the source, who declined to be named, stressing that more negotiations are due on Monday.

Earlier a source from the Hasakeh governorate said a delegation of Russian officials and members of the pro-regime militia National Defense Forces (NDF) had arrived at Qamishli airport for a meeting to take place on Monday.

A local journalist working with AFP toured seven army checkpoints that had been seized by Kurdish fighters and confirmed that regime forces were back in control.

But Kurdish fighters still held three positions previously controlled by the NDF in Al-Nashwa, a southern district of Hasakeh, the journalist said.

The regime and Kurdish forces share a common enemy in the Daesh terrorist group, but there have been growing tensions between them in Hasakeh.

Clashes erupted last week after YPG demanded the NDF be dismantled in Hasakeh, and violence escalated on Thursday when regime warplanes bombarded YPG-held positions in the city for the first time.

Regime aircraft overflew the city on Sunday morning but without carrying out attacks, the Syrian Observatory for Human Rights said.

The unprecedented regime strikes prompted the US-led coalition to scramble aircraft to protect its special operations forces helping the YPG as they battle Daesh in northern Syria.

Since Wednesday, the fighting has left 43 people dead including 27 civilians, among them 11 children, according to the Britain-based Observatory.

Thousands of civilians have fled Hasakeh, where electricity has been cut and bakeries shut.

In the northern province of Aleppo, the scene of heavy clashes all month between regime forces and rebels, 28 civilians were among 38 people killed Saturday in strikes by the regime and its Russian allies, the Observatory said.

More than 290,000 people have been killed since Syria's conflict erupted in March 2011, and millions have been forced to flee their homes.

Why Aleppo is Syria's fiercest battleground?

With rebels and regime forces each promising to unite the divided city, Aleppo is once again a main battlefield in Syria's devastating civil war. Relentless shelling and airstrikes have killed more than 300 civilians in the city since rebels broke through a regime blockade of the opposition-held east on July 31. A photo of five-year-old Omran Daqneesh, who was rescued from the rubble of a missile-struck building, sitting alone in an ambulance, confused and covered in debris and blood, has become the haunting image of the unforgiving struggle.

Syria's largest city and once its commercial center, Aleppo was a crossroads of civilization for millennia. It has been occupied by the Greeks, Byzantines and multiple Islamic dynasties. As one of the world's oldest continuously inhabited cities, Aleppo's Old City was added in 1986 to UNESCO's list of World Heritage sites. But the civil war has damaged its landmarks, including the 11th century Umayyad Mosque, which had a minaret collapse during fighting in 2012, the 13th century citadel and the medieval marketplace, where fire damaged more than 500 shops in its narrow, vaulted passageways. Some historic sites have been used as bases for fighters. Aleppo was one of the last cities in Syria to join the uprising against Bashar Assad's regime.

The key to victory

Because of its heritage and its economic potential, it is often said that whoever holds Aleppo wins the war. In fact, rebels hold other pockets around the country, but their defeat in Aleppo would mark a turning point in the conflict and deal a devastating blow to the movement to unseat Assad. But Aleppo also sits just 50 kilometers (30 miles) from the Turkish border, making it the central theater to the Syrian-Turkish proxy war. Turkish President Recep Tayyip Erdoğan is an open critic of Syria's Assad and has shown strong support toward the rebels. Ankara enjoys wide influence in northern Syria, and most rebels' supplies flow across the shared border. In a national address in June, Assad vowed Aleppo would be Erdoğan's "graveyard."

Earlier this month, the International Committee for the Red Cross called the battle for Aleppo "one of the most devastating conflicts in modern times." Pro-regime forces, supported by overwhelming Russian air power, had managed to encircle rebels and some 300,000 civilians in the city's eastern quarters in July, leading the U.N. to raise concerns of catastrophic suffering if a protracted siege ensued. But a fierce offensive led by thousands of rebels from outside the city broke the blockade on July 31, and fighting has only intensified since then. Both sides are bombarding their opponents indiscriminately, at a tremendous cost to infrastructure and human life.