Syria needs an administration representative of all Syrians, all ethnicities, PM Yıldırım says 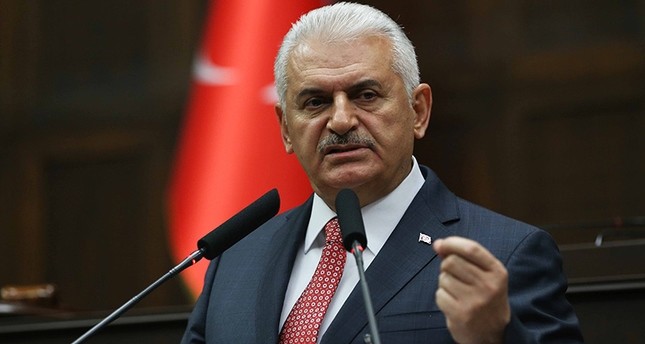 Prime Minister Binali Yıldırım said on Monday that the next administration in Syria should not be based on ethnicity while the war-torn country's territorial integrity must be preserved at all costs.

"What we care about the most in Syria is its territorial integrity, and an administration based on plurality rather than [a certain] ethnicity. Any administration allowing an ethnicity to be superior than others within the country cannot be accepted," he said in a news conference following a Council of Ministers meeting in Ankara.

"Syria is, unfortunately, losing its energy day by day with a civil war that has gone on for six years. It is essential in Syria to stop the bloodshed by the coming together of all parties and to form an administration representative of all Syrians."

Touching upon the PKK's Syrian affiliate, the PYD terrorist organization and its armed wing the YPG, he said "We cannot accept a Kurdish corridor on our southern border."

Turkey strongly rejects PYD rule in northern Syria because of its links to the PKK terrorist organization which has waged a bloody war against Turkish security forces and civilians since it was founded in 1978.

"There must be a plural, all inclusive administration in Syria which will be equal towards every ethnicity," he underscored.

Yıldırım also stated that Daesh terror in Syria and Iraq must be eliminated and Iraq's Mosul should be liberated from Daesh terrorists.

"We are ready to help and collaborate with the Iraqi government in its fight against Daesh," he said.

Syria has been locked in a vicious civil war since early 2011, when the Bashar Assad regime cracked down on pro-democracy protests -- which erupted as part of the "Arab Spring" uprisings -- with unexpected ferocity.

Since then, more than a quarter of a million people have been killed and more than 10 million displaced across the country, according to the UN.

Yıldırım also reacted to the Israeli rocket attack in the blockaded Gaza Strip on Sunday.

The PM said: "We want to clearly express that these attacks against civilians were not approved."

"The normalization of our relations with Israel will never prevent, stop our stand for Palestinians' justified cases and our common action with them," he added.

Israeli warplanes launched airstrikes in the blockaded Gaza Strip on Sunday, shortly after a rocket was fired into southern Israel.

On Sunday, the Israeli military said in a statement that a rocket hit the southern city of Sderot from the Palestinian territory.

"In response to the attack, the Israeli air forces and armored corps targeted two Hamas posts in southern Gaza Strip," the statement said.

Yıldırım said that he looked to improve relations between Turkey and Egypt.

"We are on the side of improving our relations with Egypt," said the PM.

"Egypt is a country whose culture, values are close to us, our people are brothers," said Yildirim, adding that the conflicts between governments should not be reflected on the people.

"There is no reason for animosity," al-Sisi said in statements to Egypt's three pro-government newspapers Sunday. "We gave them [Turkey] the time to reconsider their position," he said.