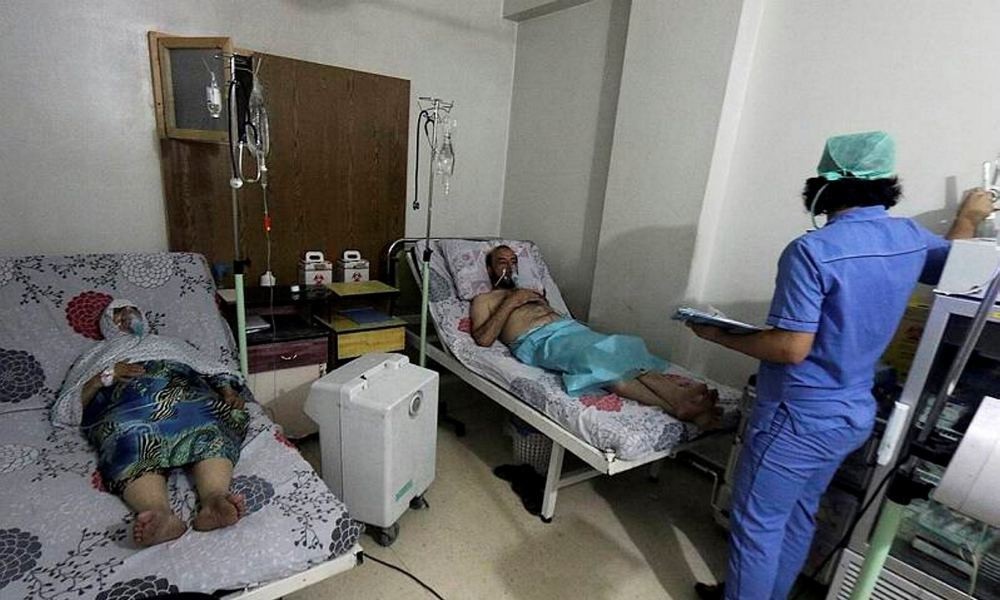 Civilians breathe through oxygen masks at al-quds hospital, after a hospital and a civil defence group said a gas, what they believed to be chlorine, was dropped alongside barrel bombs in Aleppo.
by Compiled from Wire Services Aug 26, 2016 12:00 am

A report, recently published by the U.N. according to researches of an international team, the Syrian regime and DAESH have been accused of repeatedly using chemical weapons against civilians

An international team has concluded that the Syrian government and DAESH militants carried out chemical attacks in the conflict-wracked nation during 2014 and 2015, according to a report circulated on Wednesday. The team from the U.N. and the chemical weapons watchdog blamed the government for using chlorine gas in two attacks and DAESH militants for using mustard gas in one attack. A year ago, the U.N. Security Council established the Organization for the Prohibition of Chemical Weapons-United Nations Joint Investigative Mechanism, known as the JIM, to identify those responsible for chemical attacks in Syria. The JIM investigated nine cases in seven towns where an OPCW fact-finding mission found that chemical weapons had likely been used. It determined responsibility in three cases, said three attacks pointed toward government responsibility but weren't conclusive, and described three others as inconclusive. Calling the use of chemical weapons "a barbaric tool, repugnant to the conscience of mankind," U.S. Ambassador Samantha Power urged the Security Council to take "strong and swift action" against the perpetrators. She accused the Syrian government of violating a September 2013 resolution which orders the council "to impose measures" under Chapter 7 of the U.N. Charter for "any use of chemical weapons by anyone in the Syrian Arab Republic." Those measures usually mean sanctions, and Chapter 7 can be militarily enforced.

In September 2013, Syria accepted a Russian proposal to relinquish its chemical weapons stockpile and join the Chemical Weapons Convention. That averted a U.S. military strike in response to an alleged chemical weapons attack that killed hundreds in the Damascus suburb of Ghouta the previous month. Power also accused Syria of violating its obligations under the convention, which is monitored by the OPCW. U.S. National Security Council spokesman Ned Price said "it is now impossible to deny that the Syrian regime has repeatedly used industrial chlorine as a weapon against its own people." The United States will seek accountability at the U.N. and the OPCW and has placed "a high priority" on targeting the DAESH's chemical weapons capabilities, Price said. It captured a DAESH leader involved in manufacturing such weapons in March and used information from him for airstrikes to reduce its ability to use chemical weapons, he said. "We continue to remove leaders from the battlefield with knowledge of these weapons and will target any related materials and attempts to manufacture such chemicals going forward," Price said. Power said the JIM's findings mirror "numerous other confirmed cases of chemical weapons use across Syria, and countless other allegations of such use, including as recently as several weeks ago."

In the report, the JIM said that between December 2015 and August 2016 it received more than 130 new allegations from U.N. member states of the use of chemical weapons or toxic chemicals as weapons in Syria. It said 13 alleged the use of sarin, 12 mustard gas, 4 VX nerve gas, 41 chlorine, and 61 other toxic chemicals. "The information suggests the involvement of both the government of the Syrian Arab Republic and other actions in these alleged incidents," the report said. France's U.N. Ambassador Alexis Lamek also called for council action saying: "When it comes to proliferation, use of chemical weapons, such weapons of mass destruction, we cannot afford being weak and the council will have to act." The Security Council is scheduled to discuss the JIM report on Aug. 30, but whether it will take any action remains to be seen.

Russia, a close ally of Syria, has blocked sanctions and other council action against Bashar Assad's government, but Moscow did support the establishment of the JIM. Louis Charbonneau, U.N. director at Human Rights Watch, said the council must ensure that those responsible for "the sickening, illegal use of chemical weapons in Syria ... are brought to justice in a court of law." "Without accountability, the cycle of abuses in Syria by all parties to the conflict, whether by chemical or conventional weapons, will continue unabated," he said. According to the report, obtained by The Associated Press, the JIM found the Syrian government responsible for two chlorine attacks in Idlib governorate, one in Talmenes on April 21, 2014 and one in Sarmin on March 16, 2015. It also said DAESH was "the only entity with the ability, capability, motive and the means to use sulfur mustard" gas in Marea in Aleppo governorate near the Turkish border on Aug. 21, 2015. At the time, DAESH militants were attacking opposition groups. The JIM said three attacks indicated possible government involvement, in Kfar Zita in Hama governorate on April 18, 2014, and in Qmenas on March 16, 2015 and Binnish on March 24, 2015, both in Idlib governorate. It said all three need further investigation. Power said the United States expects the JIM to continue investigating the remaining confirmed cases and any others referred by the OPCW fact-finding mission.

France's foreign minister said on Thursday the Security Council had to respond firmly after the U.N. probe. "The use of chemical weapons, which the Syrian authorities agreed to ban in 2013 under international pressure ... is an abomination that highlights the damning role played by the Damascus regime in the worsening situation in Syria," Foreign Minister Jean-Marc Ayrault said in a statement. The United States on Wednesday also condemned the use of chemical weapons by Syria. "It is now impossible to deny that the Syrian regime has repeatedly used industrial chlorine as a weapon against its own people," U.S. National Security Council spokesman Ned Price said in a statement.
RELATED TOPICS