Syrian regime should be held accountable for chemical attacks against own people, says Turkish MFA 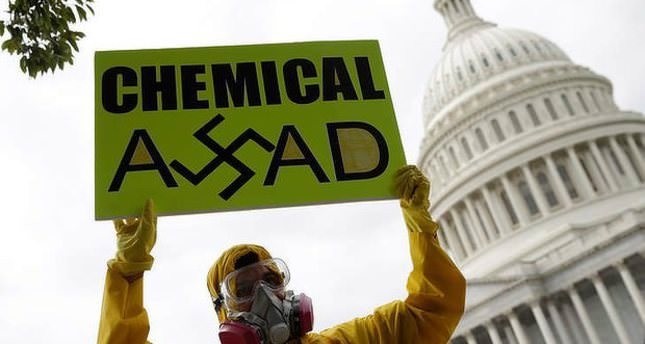 Syrian American protesters outside the US Capitol urging Congress to support President Obama in striking Syria for using chemical weapons against its own people. (AFP Photo)
by Daily Sabah with AA Aug 27, 2016 12:00 am

Turkey says it expects international organizations to push for the Syrian regime to be held accountable for the repeated use of chemical weapons against its own people.

In a statement published Saturday, the Turkish Foreign Ministry said it expects the UN and the Organization for the Prohibition of Chemical Weapons (OPCW) to continue monitoring and reporting "shortcomings and inconsistencies" in the Syrian state's chemical weapons declarations.

The statement added that Turkey expects institutions to take the necessary steps toward holding the regime accountable for "jauntily performing chemical weapons attacks".

Turkey said it had been found with certainty that the Syrian regime "failed to fulfill its obligations" following a sarin gas attack carried out in the capital's Ghouta district in 2013.

"The use of chemical weapons is both a crime against humanity and a war crime," the ministry said.

A report published this week by the OPCW and the UN confirmed the Syrian regime was responsible for the repeated use of chemical weapons, as was the Daesh terror group.

The Turkish Foreign Ministry also said efforts against Daesh would continue "with the same determination".

Earlier this week, the United States Mission to the United Nations said "an independent team of international experts" had confirmed a "pattern of use of chemical weapons by the Syrian regime".

The U.S. mission also called on the international community to act and "hold accountable those who act in defiance of such fundamental international norms".

A recent UN investigation had established that Bashar Assad's forces carried out at least two chemical attacks in Syria and that Daesh terrorists used mustard gas as a weapon.

The panel was able to identify the perpetrators of three chemical attacks carried out in 2014 and 2015.

The Syrian Network for Human Rights (SNHR) had said Monday that it has documented 139 chemical attacks in Syria since September 2013 when the U.N. Security Council issued resolution 2118 for dismantling Syria's chemical weapons arsenal.