Assad regime trying to destroy Aleppo, one hospital at a time 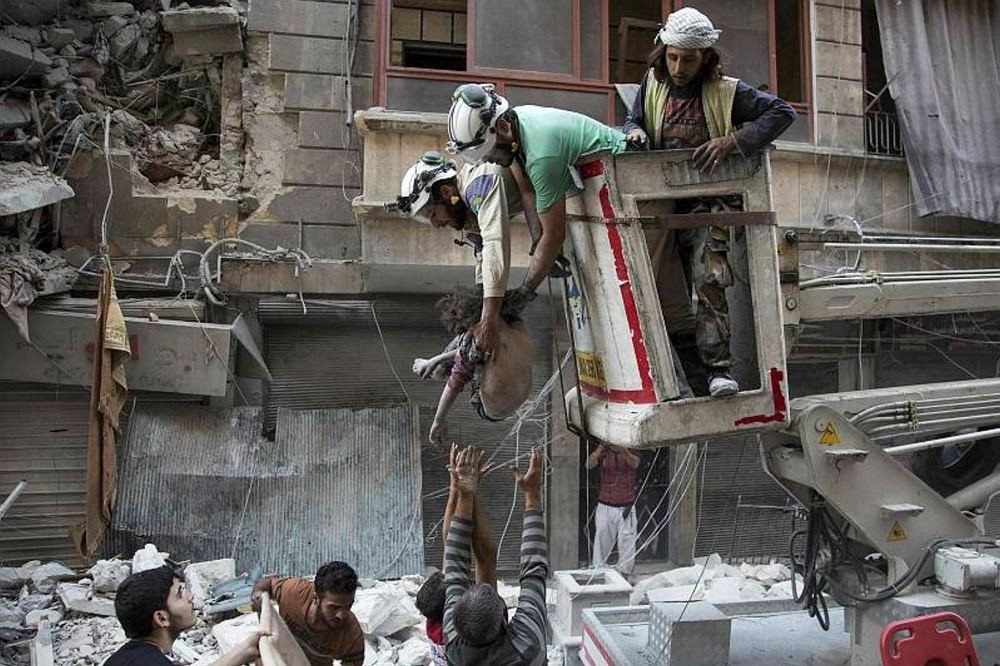 Syrian rescuers hand the body of a girl down to civilians on the ground after she was pulled from the rubble of a bundling following Assad forces airstrikes in the opposition-held neighborhood of Al-Shaar in Aleppo on Sept. 27.
by Compiled from Wire Services Oct 04, 2016 12:00 am

Amid a heavy bombing campaign that included hospitals, Russia-backed Assad regime forces continue their deadly assault in eastern Aleppo, destroying the entire city that results in a humanitarian crisis. Opposition groups and Assad forces clashed Sunday on several fronts around Aleppo as opposition fighters were called to lay down their weapons and evacuate the contested city.

A day after Assad forces captured the strategic al-Shuqeef hill north of the city, the Britain-based Syrian Observatory for Human Rights monitoring group reported fierce fighting in areas near the hill and in the Bustan al-Basha neighborhood. The two sides also clashed in Aleppo's southern Sheikh Saeed neighborhood.

The Assad regime's attempt to penetrate Aleppo's opposition-held eastern side has been accompanied by a relentless campaign of airstrikes by Russian and Assad regime's warplanes. Assad's forces are depending on the Russia bombardment and Iran-backed militias for support.

Meanwhile, a relief group and Syrian opposition monitors say airstrikes have damaged and put of service one of the country's most secure hospitals, which had been dug into a mountain. The International Union of Medical Care and Relief Organizations, or UOSSM, says the Dr. Hasan Al-Araj, also known as "Cave Hospital" and located in the central province of Hama, was struck twice on Sunday.

The Britain-based Syrian Observatory for Human Rights said on Monday that Russian warplanes carried out the attacks that hit the hospital near the central village of Kfar Zeita, adding that it is one of the largest hospitals in opposition-held areas of the war-torn country.

The European Union proposed a new humanitarian plan in coordination with the United Nations for the besieged half of the Syrian city of Aleppo on Sunday, but said it required cooperation from all parties to the conflict. The plan aims to deliver medical, water and food aid from EU stocks in government-held western Aleppo to up to 130,000 people in insurgent-controlled eastern Aleppo, and to evacuate urgent medical cases from the area.

East Aleppo was cut off in early July when Syrian government and allied forces took control of the main supply route in. Subsequent attempts by Russia and the United States which support opposing sides in the conflict to implement successful ceasefires and get guarantees from all parties to ensure the safety of convoy staff have failed. The U.N. has previously criticized the Syrian government for restricting the content of aid deliveries, blocking access to areas of high need and removing items from some consignments. In September an aid convoy west of Aleppo was hit and destroyed, killing around 20 people.
RELATED TOPICS