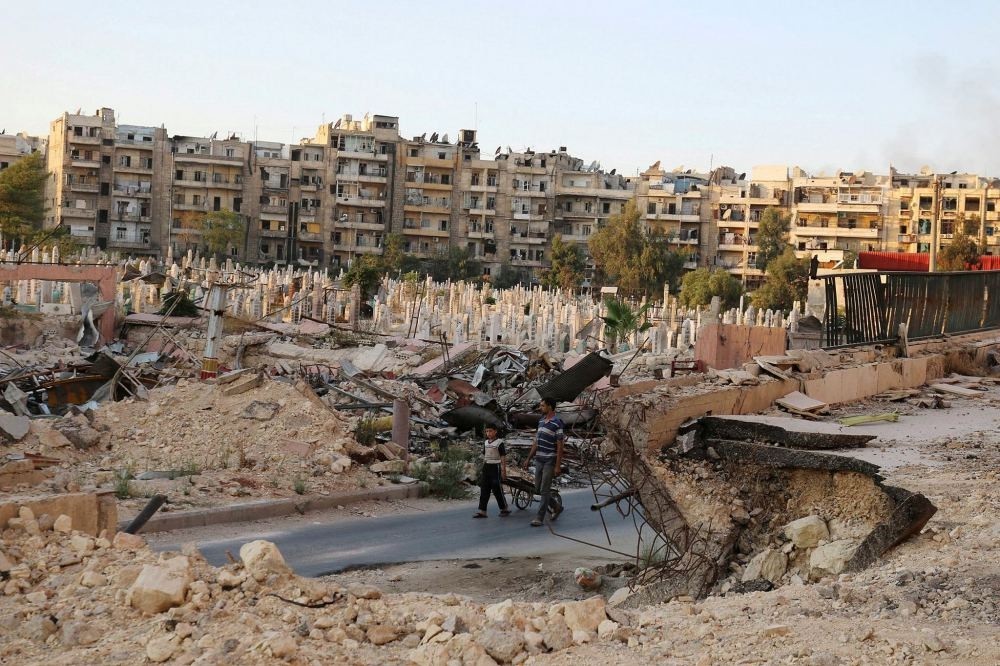 People walk near an over-crowded graveyard in the opposition-held al-Shaar neighborhood of Aleppo, Syria Oct. 6.
by Cihangir Yıldırım Oct 08, 2016 12:00 am

With diplomacy failing to bring an end to violence in Syria, Russia backs the UN proposal on Aleppo, saying they are ready to let opposition fighters leave Aleppo with arms

The level of destruction, much of it caused by Syrian and Russian airstrikes, caused Staffan de Mistura, the UN special envoy to Syria, to warn on Thursday that Aleppo would be destroyed by the end of the year with thousands more civilian deaths. "No one can deny that we are in an emergency mode regarding Syria, Aleppo and future of the conflict," he told reporters in Geneva. He called on an estimated 900 fighters from Fatah al-Sham Front, previously known as Nusra Front and considered a terrorist group by the UN, to leave eastern Aleppo. He said around 8,000 opposition fighters were resisting regime forces in the city.

The city has been a key site in the battles between opposition forces and regime troops backed by Russia. Around 275,000 people are currently under siege in the city, which dates back at least 4,000 years and is one of the world's oldest continually inhabited cities. Among the civilian population are an estimated 100,000 children. The death toll for the conflict has been estimated at more than 470,000 by the Syrian Center for Policy Research, a Beirut-based nongovernmental organization.

The Russian parliament on Friday ratified a treaty with Syria that allows Russian troops to stay indefinitely in the Mideast country, with lawmakers strongly backing the deal in a show of support for embattled Syrian President Bashar Assad. The development comes against the backdrop of Assad's onslaught, backed by Russian warplanes, on the opposition-held eastern part of the city of Aleppo in northern Syria. Since the collapse of a U.S.-Russia-brokered cease-fire last month, ties between Moscow and Washington have grown even more strained. The two powers support opposite sides in the war as Moscow has been a staunch Assad ally.

On Thursday, the Russian military warned the U.S. against striking the Syrian army, underlining that its air defense weapons in Syria stand ready to fend off any attack. Russian Defense Ministry spokesman Maj. Gen. Igor Konashenkov said any U.S. strikes on areas controlled by Assad's regime could jeopardize the lives of Russian servicemen and noted that the Russian S-300 and S-400 air defense missile systems have a range that would be a "surprise" to any country operating its aircraft over Syria.

German Chancellor Angela Merkel on Friday called for an end to the heavy fighting in the northern Syrian city of Aleppo. "It's terrible what is happening there. We have to do all in our power to reach a ceasefire, and in particular to really take care of the people in need," Merkel told a gathering of party supporters in the city of Magdeburg. "I can only appeal to Russia. Russia has a lot of influence over al-Assad. We have to put an end to this ghastly crime as quickly as possible," Merkel said.

In an interview with Danish broadcaster TV2 aired on Thursday, Assad said Aleppo's "best option" would be a reconciliation deal like those the government has negotiated with opposition elsewhere. Opposition forces say those deals have been forced upon them by a government strategy of "surrender or starve." Assad said that without an agreement, he would "continue the fight with [the opposition] till they leave Aleppo... There's no other option."
RELATED TOPICS