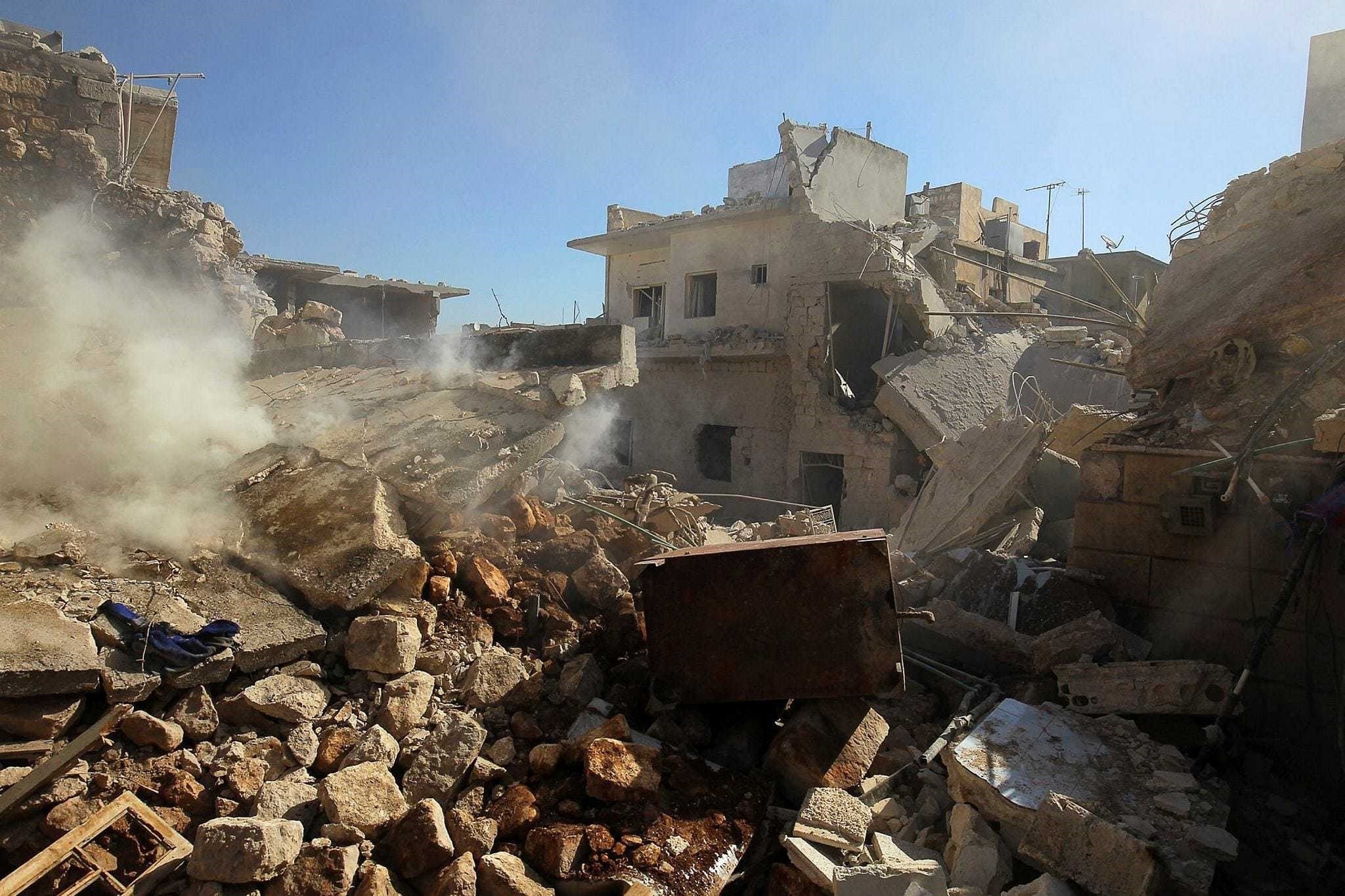 Smoke rises from damaged buildings after an airstrike on the opposition-held town of Darat Izza, province of Aleppo, Syria, Nov. 5.
by Compiled from Wire Services Nov 07, 2016 12:00 am

Intense fighting resumed in war-torn Syria's Aleppo following the end of the 10-hour cease-fire as opposition groups struggle to resist Russian-backed troops, while at least 11 civilians were killed over the weekend in airstrikes, a report claims

After a 10-hour cease-fire announced by Russia for the divided northern city of Aleppo came to an end on Friday night, renewed fighting resumed over the weekend, as at least 11 civilians were killed and another 25 injured by a Russian airstrike Saturday in opposition held areas of northwestern Aleppo province, a local civil defense official told Anadolu Agency.

The warplanes hit opposition neighborhoods on the western outskirts of Aleppo, killing four civilians, including a child, the Syrian Observatory for Human Rights added.

Bashar Assad's forces, meanwhile, shelled the opposition-controlled districts of Dahiyat al-Assad and the 1070 Apartment Project in the south-western parts of Aleppo, the Observatory said, without giving a figure on potential casualties.

Opposition forces captured the two districts in a major attack started on Oct. 28 and aimed at breaking a government siege on the opposition-held enclave of eastern Aleppo.

A 10-hour cease-fire, announced by the Syrian regime and allied Russia, went into effect in Aleppo last Friday with the aim of forcing opposition fighters and civilians to leave eastern Aleppo. Opposition fighters rejected the ceasefire and vowed to continue fighting to break the siege, which has been in place since July on their eastern enclave of the war-torn city.

As Syria's second biggest city, Aleppo has become the top strategic point to determine Syria's fate. Opposition groups in and around Aleppo have been preparing to launch a counter-offensive to try and break Assad's suffocating siege of Aleppo's eastern-held neighborhoods for several weeks.

The area has been subjected to a ferocious campaign of aerial attacks by Russian and Syrian regime warplanes, and hundreds of people have been killed in recent weeks according to opposition activists and trapped residents.

Aleppo is the focal point of the six-year war in Syria. Assad has said he is determined to retake the country's largest city and former commercial capital as his forces have maintained a siege on the opposition-held eastern quarters since September. The U.N. estimates 275,000 people are trapped inside with dwindling supplies of food and medicine.

Syria has been locked in a vicious civil war since early 2011, when the regime cracked down with unexpected ferocity on pro-democracy protests that erupted as part of the "Arab Spring" uprisings. Since then, more than a quarter of a million people have been killed and more than 10 million displaced across the war-torn country, according to U.N. figures.

More than a quarter of a million people have been killed and more than 10 million displaced across the war-battered country, according to the UN. However, the Syrian Center for Policy Research, a Beirut-based nongovernmental organization, puts the death toll from the five-year conflict at more than 470,000. For the past year, Russia, citing the need to combat "terrorism" and support the embattled Assad forces, has carried out numerous airstrikes against opposition-held parts of Aleppo, which have led to the death and injury of hundreds of the city's civilian inhabitants.
RELATED TOPICS