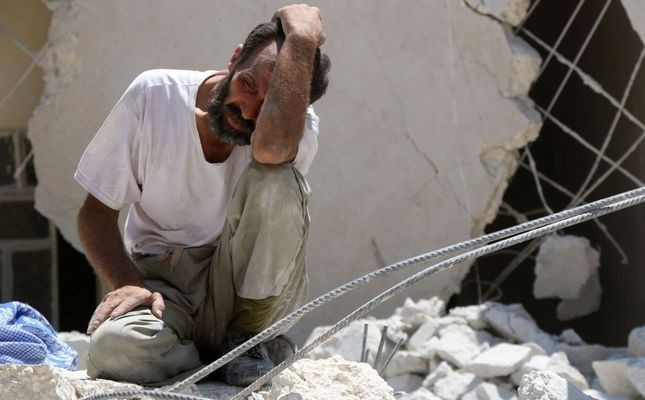 A man looks on as Syrian civil defense workers look for survivors under the rubble of a collapsed building following reported airstrikes on July 17 in the opposition-controlled neighborhood of Karm Homad in the northern city of Aleppo.
by Daily Sabah Dec 14, 2016 12:00 am

Pointing to the atrocities carried out by the Assad regime in Syria's city of Aleppo, the Republican lawmaker said the Obama administration failed in its Syria policy.
" The slaughter in #Aleppo is heart-breaking. President Obama's Syria policy has been a complete disaster," he said in a tweet.

The slaughter in #Aleppo is heart-breaking. President Obama's Syria policy has been a complete disaster.


"I'm afraid Obama's Syria policy will haunt the region and our nation for decades to come. Obama sat on the sidelines as Iran and Russia went all-in for Assad, effectively destroying the Syrian opposition," Graham added in Twitter.

"Assad's "victory" in Aleppo is a nightmare for America," he concluded.

Over 100 civilians were executed by Assad regime forces alongside Russian jets carrying out air strikes on Monday after Syrian state TV claimed the regime forces and their allies gained control of 99 percent of eastern Aleppo.

Only 1 percent of the original pocket remains in opposition hands, most of which has been badly damaged, with many homes and entire blocks destroyed.