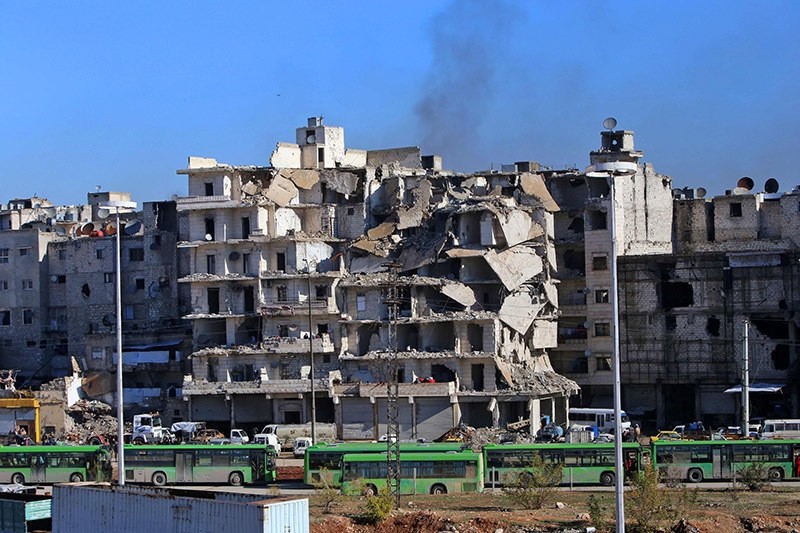 Amid Turkey's intensified diplomatic traffic with Russia and Iran, a cease-fire has been established and evacuation process began on Thursday, despite disruptions caused by the Iran-backed militia and regime forces opening fire on the convoys transferring civilians from eastern Aleppo to opposition-held Idlib.

The first evacuation convoy carrying the sick and injured left eastern Aleppo early Thursday, however it was attacked by militia groups backed by Iran, as well as the regime forces. According to local reports, amid Iran-backed Shiite militias opening fire on the convoy, four people were killed, several were injured.


The convoy of 20 buses is carrying at least 200 injured people-over 50 in critical condition-according to an Anadolu Agency reporter at the scene of the attack.


Speaking on the border Syria and Turkey, Turkish Deputy Prime Minister Veysi Kaynak said the country is planning to set up a camp inside Syria to receive those fleeing Aleppo.

He added that a total of 80,000 to 100,000 civilians might be evacuated from eastern Aleppo and that each convoy is only allowed to have 20 buses, which can carry nearly 1,000 people at once.

Following the attack, the convoy had to turn back to the Syrian town without having successfully completed its evacuation. The evacuation of the sick and wounded resumed once again at around 1:10 p.m. [local time] and the convoy reached opposition-held Idlib.

General Valery Gerasimov, Russian's chief of General Staff, said the evacuation of around 5,000 people, including armed groups, from eastern Aleppo had started. He said a 21 kilometer-long humanitarian corridor had been created for the evacuation.

The International Committee of the Red Cross and Syrian Arab Red Crescent have reportedly escorted the convoy out of eastern Aleppo.

Later in the afternoon, warplanes belonging to the Assad regime carried out two airstrike on the area of Rashidin, located in opposition-held eastern Aleppo, Anadolu Agency reported. Iran-backed Shiite militias also carried out four missile attacks on the region.

The Rashidin area is located on the route of the first convoy which evacuated injured civilians from eastern Aleppo.

Turkey's Presidential Spokesperson İbrahim Kalın said on his Twitter account that Turkey is ready to welcome the evacuees from Eastern Aleppo.

Evacuations from Eastern Aleppo start this morning. Preparations have been made in Idlib and Turkey. Awaiting our brothers and sisters.

Hundreds of civilians have been killed and tens of thousands displaced in the Russia and Iran-backed Assad regime's campaign to retake Aleppo.

The evacuation of civilians and opposition fighters from the tiny bit of territory which the opposition still holds in eastern Aleppo had been supposed to begin at dawn Wednesday, but shelling by the Assad regime and Iran-backed militias resumed in the morning hours before it could take place, violating the truce.

With fears mounting that the regime had been gunning down families on the streets, the opposition announced the truce deal was back on track, offering everyone a sliver of hope. According to unofficial numbers there are about 70,000 to 80,000 civilians in stuck in eastern Aleppo.

The Turkish Foreign Ministry Spokesperson Hüseyin Müftüoğlu also said on Thursday that Turkey has been involved in a busy diplomatic traffic with Russia and Iran.

Müftüoğlu highlighted that Turkey's first priority is to open a humanitarian corridor for the evacuation of civilians in the eastern Aleppo area and that the country is ready to take all necessary constructive steps to avoid the intensification of the humanitarian tragedy.

"In the last 72 hours we have gone through a busy diplomatic traffic. President Erdoğan has spoken with the UN Secretary General and yesterday spoke with Putin. Foreign Minister has spoken to [Russia's Foreign Minister] Lavrov, his Iranian counterpart, and Saudi and Qatari ministers," the Müftüoğlu said and added that the talks also included Syrian opposition's Chief Negotiator Riad Hijab and related countries' diplomatic envoys in Turkey.

Foreign Minister Mevlüt Çavuşoğlu announced on Wednesday that a tripartite meeting in Moscow regarding the ongoing attacks on civilians in Syria's Aleppo was planned on December 27, with the participation of Turkey, Russia and Iran.