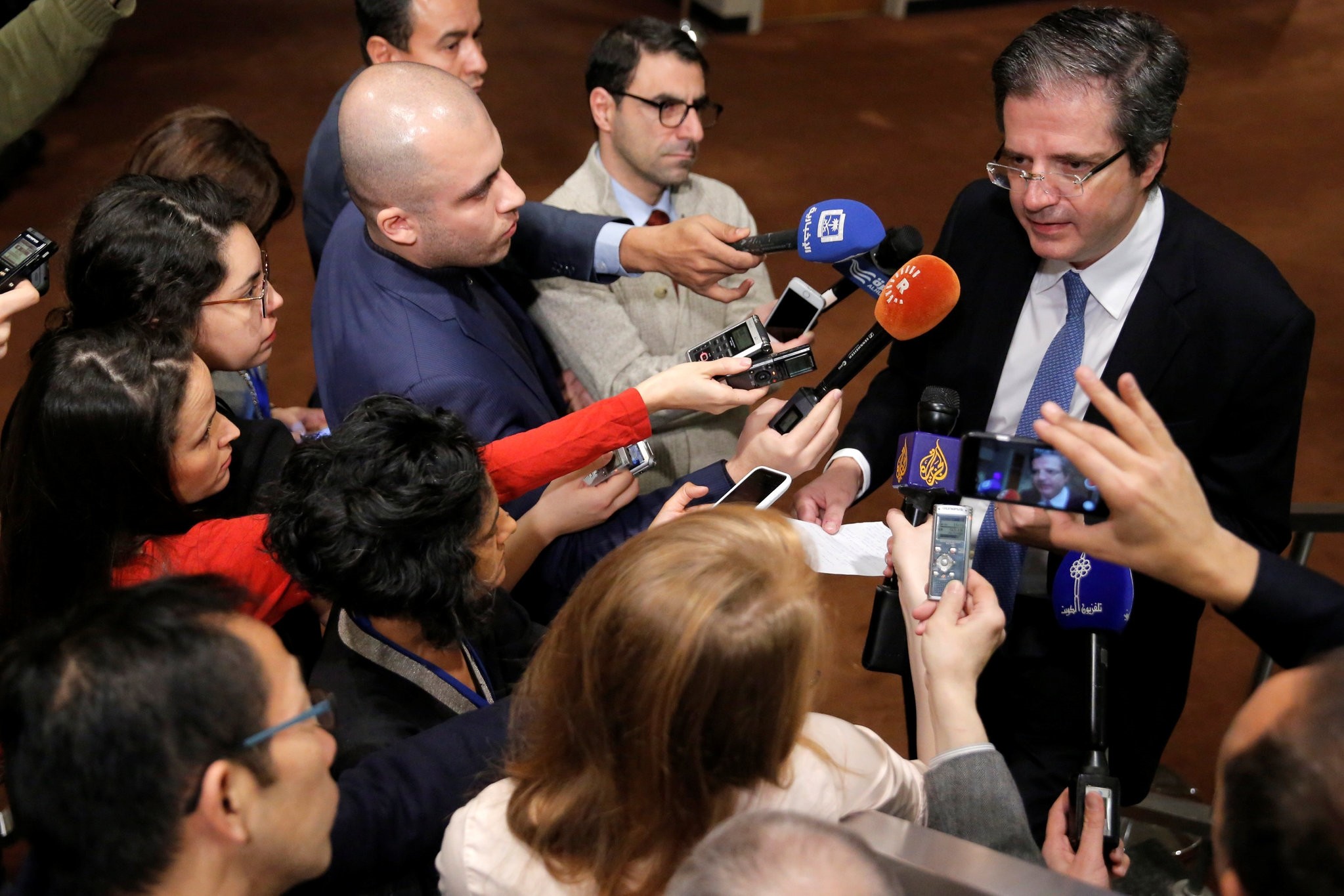 Permanent Representative of France to the United Nations Francois Delattre speaks to media ahead of a United Nations Security Council vote, December 18, 2016. (REUTERS Photo)
by Dec 18, 2016 12:00 am

Russia on Sunday warned it would use its veto to block a French-drafted resolution on sending UN observers to Aleppo, setting up yet another showdown with the West over the fate of the besieged Syrian city.

Moscow presented a rival draft resolution during a closed-door meeting of the Security Council that requests that the United Nations make "arrangements" to monitor the situation, according to the text seen by AFP.

But the Russian proposal makes no specific mention of sending observers to Aleppo, where the evacuation of civilians from the last opposition-held part of the city was set to resume on Sunday.

"We believe quite simply that what they are proposing is unworkable and dangerous," Russian Ambassador Vitaly Churkin told reporters about the French proposal.

"We cannot allow it to pass because this is a disaster," said Churkin ahead of the meeting.

Russia, Assad's main ally in the nearly six-year war, has vetoed six resolutions on Syria since the conflict began in March 2011.

France circulated a draft text late Friday stating that the council is "alarmed" by the worsening humanitarian crisis in Aleppo and by the fact that "tens of thousands of besieged Aleppo inhabitants" are in need of aid and evacuation.

The measure would task UN Secretary-General Ban Ki-moon with deploying UN staff to Aleppo to monitor evacuations and report on the protection of civilians who remain in the city.

Regime forces this week moved to assert full control over the east of the city, which had been held by opposition fighters since 2012.

Evacuations that were halted on Friday were expected to resume Sunday under a new deal that would allow civilians and fighters in four other besieged towns to leave.

Hundreds of civilians, including scores of children, have died in east Aleppo during the latest round of fighting. Nationwide, more than 310,000 people have been killed since the Syrian conflict began.

French Ambassador Francois Delattre said the international presence would prevent Aleppo from turning into another Srebrenica, where thousands of Bosnian men and boys were massacred in 1995 when the town fell to Bosnian Serb forces.

"Our goal through this resolution is to avoid another Srebrenica in this phase immediately following the military operations," Delattre said, warning that "mass atrocities" were possible.

The French envoy, who met with Churkin on Saturday, said he was not ready to compromise on his proposal, suggesting that the Russian draft resolution would be blocked by the Western powers.

Churkin said it would be "reckless" for Ban to send observers to east Aleppo under the French proposal because their safety could not be ensured.

"He cannot tell his people just to march into a ruined city -- and do what?" he said.

"There are various groups who are fighting there, maybe there are some terrorists still lurking in the ruins of eastern Aleppo," he added.

Both the French and Russian draft resolutions demand immediate access for deliveries of humanitarian aid to Aleppo, which has been under siege since July.

France and the United States have said they would be ready to call for an emergency special session of the General Assembly if Russia again blocks UN action on Syria.

Such a session, a rare occurrence at the United Nations, would be aimed at declaring global condemnation of Russia's actions in Syria, although resolutions adopted by the General Assembly are non-binding.