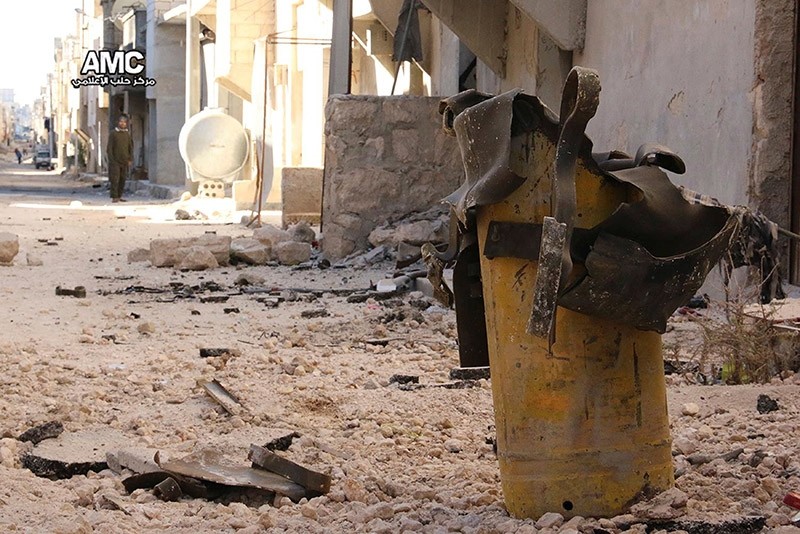 Handout photo provided to Reuters on February 13, 2017, by Human Rights Watch claiming to show remnant of a yellow gas cylinder found in Masaken Hanano, Aleppo, after a chlorine attack on November 18, 2016. (Reuters Photo)
by Daily Sabah Feb 14, 2017 12:00 am

Regime forces in Syria committed at least eight chemical weapon attacks in Aleppo between November 17 and December 13 2016, according to a new detailed report by Human Rights Watch.

The report relies on interviews with civilians and emergency medical workers, photographs and videos, and information gathered from social media. However, Human Rights Watch acknowledges that "identifying with certainty the chemical used in the attacks without laboratory testing is difficult."

As a result of the attacks, at least nine civilians were killed, including four children, and about 200 people were injured.

Ole Solvang, deputy emergencies director at Human Rights Watch said, "The pattern of the chlorine attacks shows that they were coordinated with the overall military strategy for retaking Aleppo, not the work of a few rogue elements."

Solvang went on to say that the UN Security Council should apply sanctions to all those who use chemical weapons, and that no one should be exempted from responsibility for the attacks.

Syria agreed to the prohibition of chemical weapons in October 2013, nevertheless, the regime has reportedly been releasing chlorine bombs using helicopters since April 2014.