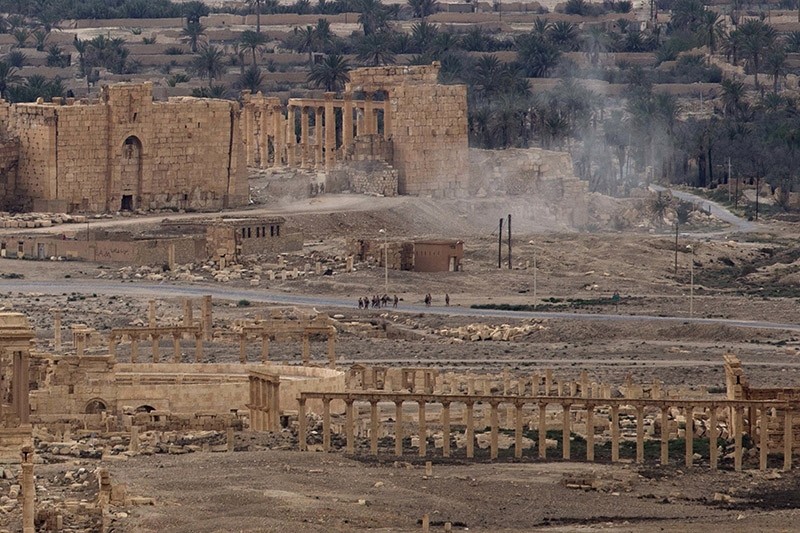 Russian soldiers stand on a road as smoke rises from a controlled land mine detonation by Russian experts inside the ancient town of Palmyra, Syria in the central Homs province. (AP File Photo)
by Associated Press Feb 21, 2017 12:00 am

Four Russian servicemen were killed last week in Syria when their vehicle struck a roadside bomb, the Russian military said Monday, raising the total Russian combat casualties so far in Syria's war to 27.

The four died when they were travelling as part of a Syrian military convoy to the central city of Homs on Thursday from the Tiyas air base, which is close to the ancient town of Palmyra held by the Daesh terror group.

The Russian Defense Ministry said the bomb was detonated by remote control. Two other servicemen were wounded in the blast.

Palmyra, about 60 kilometers (37 miles) away, is one of the focal points of the battle against Daesh. No group has claimed responsibility for the attack, but blame is likely to fall on Daesh.

Moscow launched its military operations in support of Assad in September 2015. The Russian military has touted its air power as the backbone of its intervention, but its technicians, military advisers, and police forces have helped to clear and secure territory as well.

Russian media estimate that more than 4,000 servicemen have been deployed in Syria based on voter rolls from Russia's September 2016 parliamentary elections.