Third round of Syria talks to proceed in Astana 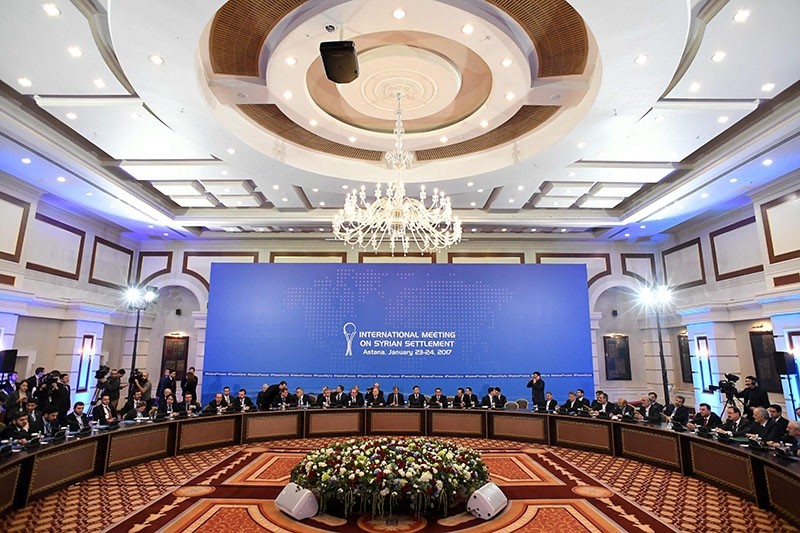 Representatives of the Assad regime and opposition groups along with other attendees take part in the first session of Syria peace talks (AFP Photo)
by Merve Aydoğan Mar 13, 2017 12:00 am

With the aim of bringing an end to the six-year-long conflict in Syria, which has left hundreds of thousands of civilians dead and millions of people displaced, the third round of talks in the capital of Kazakhstan, Astana, is planned to begin on Tuesday.

A statement from Kazakhstan's Foreign Minister on Monday said that "The delegations are arriving today to participate in the next round of the Astana process for resolving the situation in Syria."

While the talks are seen as a new step toward a permanent and sustainable peace in Syria, which has been locked in a civil war since 2011, Ankara and the Kremlin brokered a nationwide cease-fire agreement on New Year's Eve, bringing intense clashes between the Assad regime and opposition forces to an abrupt halt as a result of Ankara's assertive and proactive stance on Syria, both militarily and diplomatically.

While confirming the participation of the three guarantor countries Kazak Foreign Minister Kairat Abdrakhmanov said, "For now, I cannot tell you who else will attend the talks," Commenting on the two-day meeting in Astana, adding that "We are waiting confirmation from other participants." However, the Tehran-based media said the Iranian team departed for Astana on Monday. The delegation is headed by Deputy Foreign Minister for Arab and African Affairs Hossein Jaber Ansari.

On the format of the meeting, Minister Abdrakhmanov said, "The format and the agenda of the talks depend on the guarantor countries — Russia, Turkey, and Iran," and he further noted that Jordan's presence will ensure the Syrian opposition's participation in the meeting. The Kazakh Foreign Ministry also sent invitations to representatives of the United Nations, the United States, and Jordan.

Commenting on the Astana talks, prominent Middle East expert Can Acun from the SETA Foundation said, "it would be highly optimistic to expect a lot from Astana." Drawing attention to the ongoing violations to the nationwide cease-fire in Syria, Acun stressed that influence by Iran and the U.S. is complicating the situation on the ground further. He also told Daily Sabah that the situation in Syria is "highly complex" and underlined that the regime must be sincere and fulfill the pledges made to opposition groups.

The Syrian opposition over the weekend called for the postponement of the talks until March 20, due to violations of the cease-fire, as opposition representative Osama Abu Zaid tweeted the opposition would not attend.

Zaid said Monday that the Syrian opposition "will not participate in Astana 3 due to the lack of an implementation of the cease-fire obligations and Russia fostering Waer's [the besieged neighborhood that is the last rebel-held area in Homs] displacement."

The head of the Syrian Turkmen Assembly Abdurrahman Mustafa, as another member of the opposition delegation to the Astana talks, also confirmed the call for the postponement of the talks as Mustafa told Daily Sabah that violations to the cease-fire by Iran and the regime still continue. Mustafa stressed the necessary mechanisms toward maintaining the cease-fire and establishing peace must be provided. He described the Astana talks as "subsidiary to the Geneva talks… Astana is beneficial to a Syrian resolution."