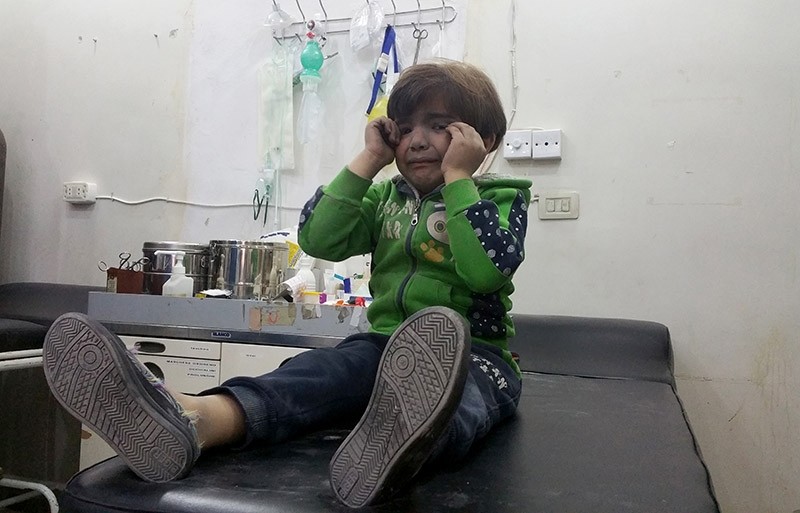 The Assad regime has used chemical weapons once again, killing at least 100 civilians including children in an airstrike that released ‘toxic gas’ on the opposition-held Idlib. Thirty ambulances were dispatched from Turkey to rescue those in dire need of help

The Assad regime continues to commit crimes against humanity as more than 100 civilians were killed and 500 others, mostly children, have been affected by the chlorine gas attack carried out by regime warplanes in the Khan Shaykun town in Idlib. The latest chemical attack was seen as the worst in the county's six-year war. With many civilians suffering respiratory problems in dire need of help, Turkey dispatched 30 fully equipped ambulances for rescue operations.

The reports claim that it was the third chemical attack in over a week in Syria as the Assad regime consistently targets residential areas. The first two attacks were reported in Hama province, an area close to yesterday's chemical attack. After the gas attack, the Syrian regime reportedly bombarded a hospital in the town where doctors were treating victims.

Turkey condemned the chemical attack on Syria's opposition-held town of Idlib, describing it as "a crime against humanity." The chemical attacks on Idlib were "inhuman" and "unacceptable," President Recep Tayyip Erdoğan said while stressing the importance of maintaining the fragile Syrian cease-fire. In a phone conversation with Russian President Vladimir Putin, the president reiterated the need for further efforts to strengthen cooperation in the fight against terrorism.

Foreign Minister Mevlüt Çavuşoğlu also stated that the suspected use of chemical weapons could derail the process of Syrian peace talks being held in Astana, Kazakhstan.

The parallel series of talks in Astana, Kazakhstan, aim to bolster the truce to support the U.N. negotiations. Damascus has been the scene of heavy fighting in recent days, with the moderate Syrian opposition making large incursions into the east of the Syrian capital, while the Assad regime has responded with airstrikes on opposition positions. The last round of Astana talks began on Feb. 23, and ended on March 4 without any clear result. The next meetings in Astana are to be held on May 3-4.

The global chemical arms watchdog said it was "seriously concerned" by reports of a suspected gas attack. "The Organization for the Prohibition of Chemical Weapons (OPCW) is seriously concerned about the alleged chemical weapons attack reported by the media this morning in the Khan Sheikhun area of southern Idlib," the group said, adding it was "gathering and analyzing information from all available sources."

Chlorine gas is one of several elements and compounds used in devastating chemical attacks, outlawed by international treaties. A high level of exposure to the gas can cause suffocation as the chemical injures the pulmonary airways resulting in severe fluid buildup in the lungs, with children and seniors particularly vulnerable.

In the wake of the 2013 attack, Assad agreed to a Russia-sponsored deal to destroy his chemical arsenal and joined the Chemical Weapons Convention. His government declared a 1,300-ton stockpile of chemical weapons and so-called precursor chemicals that can be used to make weapons amid international outrage at a nerve gas attack on the outskirts of Damascus.

Those weapons have been destroyed, but member states of the OPCW have repeatedly questioned whether Assad declared everything in 2013. The widely available chemical chlorine was not covered in the 2013 declaration and activists say they have documented dozens of cases of chlorine gas attacks since then. The Syrian government has consistently denied using chemical weapons and chlorine gas, accusing the rebels of deploying it in the war instead.

France's foreign minister called for an emergency meeting of the United Nations Security Council after what he said was a "disgusting" gas attack on Syria's rebel-held Idlib province. "In the face of such serious actions that threaten international security, I ask for everyone not to shirk their responsibilities. With this in mind, I ask for an emergency meeting of the U.N. Security Council," he added. France, Britain and the United States in February put forward a resolution to impose sanctions targeting Syrian government officials over accusations of chemical weapon attacks during the six-year conflict.