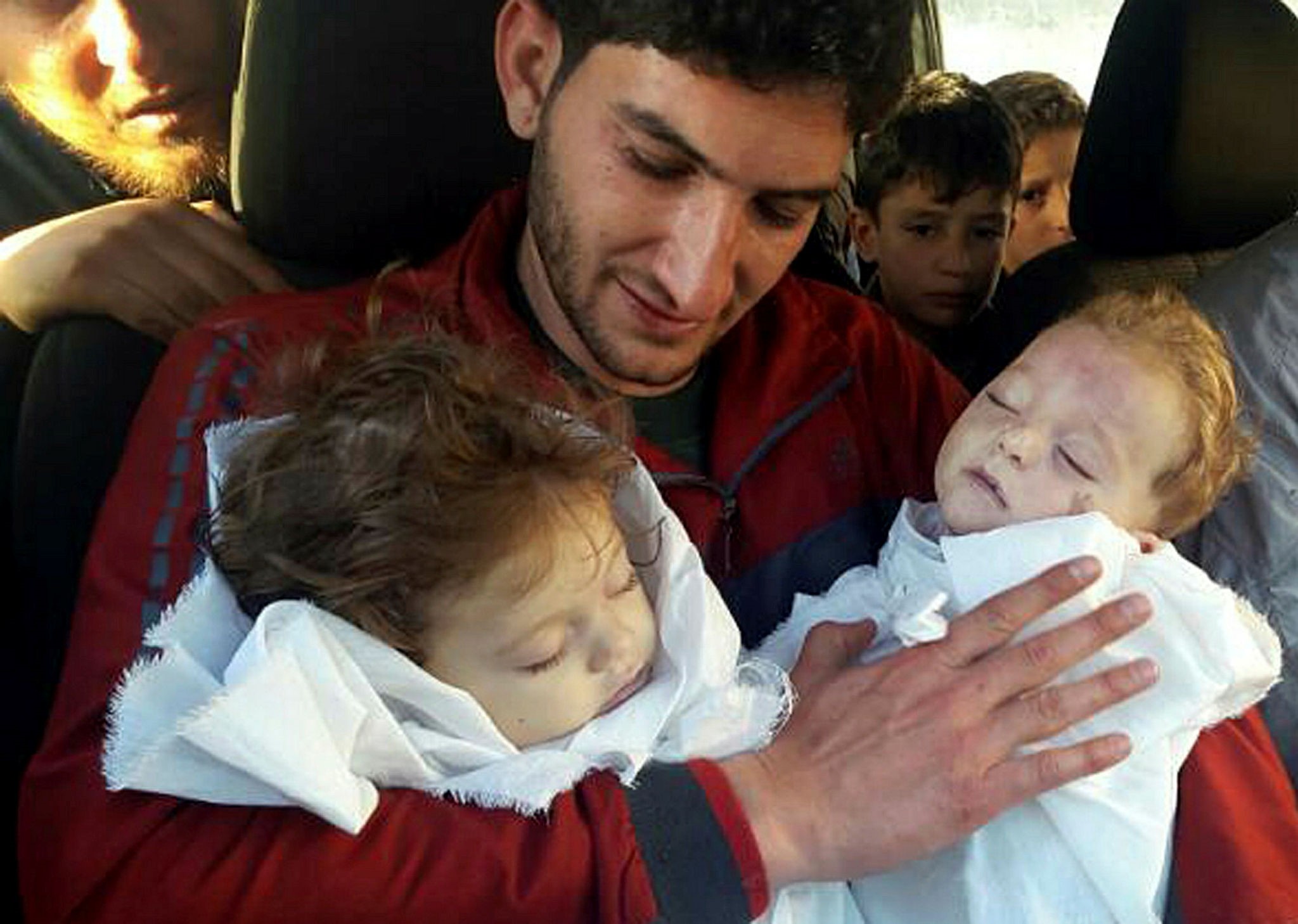 In this picture taken on Tuesday April 4, 2017, Abdul-Hamid Alyousef, 29, holds his twin babies who were killed during an Assad regime chemical weapons attack, in Khan Sheikhoun in the northern province of Idlib, Syria. (AP Photo)
by Associated Press Apr 06, 2017 12:00 am

The grief-stricken father cradled his 9-month-old twins, Aya and Ahmed, each in the crook of an arm. Stroking their hair, he choked back tears, mumbling, "Say goodbye, baby, say goodbye" to their lifeless bodies.

Then Abdel Hameed Alyousef took them to a mass grave where 22 members of his family were being buried. Each branch of the clan got its own trench.

More than 80 people, including at least 30 children and 20 women, were killed in the chemical attack on the Syrian town of Khan Sheikhoun early Tuesday, and the toll could still rise. The Alyousef family, one of the town's main clans, was hardest hit. 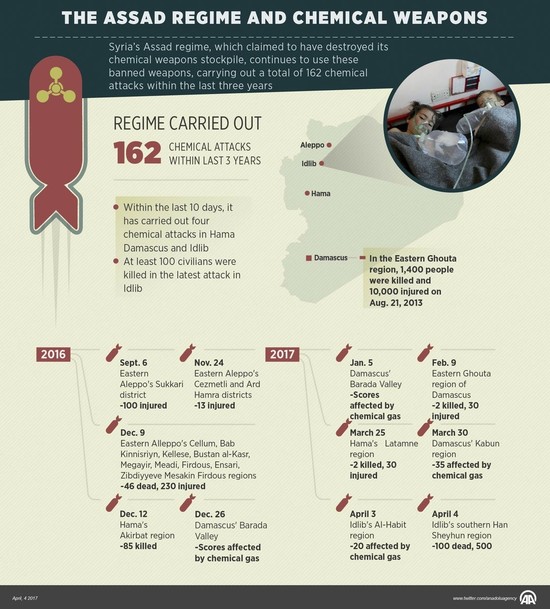 Another member of the family, Aya Fadl, recalled running from her house with her 20-month-old son in her arms, thinking she could find safety from the toxic gas in the street. Instead, the 25-yearold English teacher was confronted face to face with the horror of it: A pick-up truck piled with the bodies of the dead, including many of her own relatives and students.

"Ammar, Aya, Mohammed, Ahmad, I love you my birds, really they were like birds. Aunt Sana, Uncle Yasser, Abdul-Kareem, please hear me," Fadl said, choking back tears as she recalled how she said farewell to her relatives in the pile.

"I saw them. They were dead. All are dead now."

The tragedy has devastated the town of several tens of thousands of residents. It also deepened the frustration felt by many Syrians in opposition-held areas that such scenes of mass death that have become routine in the country's 6-year-old civil war bring no recourse or even determination of responsibility.

The U.S. and other Western countries say that Assad regime is behind the attack, while Syria and its main backer Russia denied it. Despite world condemnation, bringing justice is difficult in the absence of independent investigation of Syria's chemical arsenal, which the regime insists it has destroyed.

"My heart is broken. Everything was terrible. Everyone was crying and couldn't breathe," Fadl told The Associated Press Wednesday in a series of voice messages. "We had many circumstances in Syria and we had many difficult situations. This is the most difficult and most harmful situation I ever had."

In 2013, horrific scenes of Syrians flooding hospitals or found dead in their homes after a sarin gas attack that killed hundreds in the rebel-held Damascus suburb of Ghouta provoked international condemnation. A Russian-brokered deal followed allowing Assad to declare he has destroyed his chemical stockpile and joined the Chemical Weapons Convention.

However, Tuesday's massacre was not caused by chlorine, an irritant with limited ability to kill. The high number of casualties, as well as the grave symptoms including convulsions, constricted pupils and vomiting point to a more complex chemical gas.

A Doctors Without Borders medical team, which examined a number of victims in a hospital near the border with Turkey, said the symptoms are consistent with exposure to a neurotoxic agent— at least two different chemical agents. The U.S.'s early assessment is that it involved the use of chlorine and sarin, according to two U.S. officials who weren't authorized to speak publicly on the matter and demanded anonymity.

In Khan Sheikhoun, the tragedy was compounded because so many victims were from a single extended family, the Alyousef clan.

Witnesses say four rockets hit around 6:30 a.m. Tuesday, smashing a crater in the ground, but causing minimal structural damage. It quickly became clear this was not a conventional attack.

Alaa Alyousef said his family was sleeping and woke to the sound of the impacts only a few hundred yards (meters) away. The first thing they saw was smoke. His father went outside then rushed back in. He had seen a woman walking near the strike suddenly collapse. The family frantically closed windows and dampened cloths with water and apple vinegar to put over their faces.

They were lucky, the wind went in the other direction, Alyousef said.

The rockets hit on the edge of North Harah, a district where much of the Alyousef clan lives. Frantically the clan's members and their neighbors fled, running from house to house trying to track down relatives.

Fadl remembered her panic when the rockets woke her.

"My husband, where are you? Oh, where are you my lovely son," she recalled calling out. "They were next to me but I couldn't see them." She said their eyes began hurting. "The air became very heavy. There was no bad smell. But the air was so heavy to breathe."

The Alyousefs brought their dead to a family member's home that was outside the worst attack area. The courtyard was turned into a makeshift morgue where surviving relatives tried for hours to resuscitate loved ones already dead.

That's when Fadl finally collapsed, she said, only to wake up in a medical center.

While Fadl recovers with her son at her parents' home in a town north of Khan Sheikoun, her husband is still looking for survivors from his extended family.

Alaa Alyousef said not all homes have been searched for survivors yet.

"We are still in shock, a big shock. Our family is devastated," the 27-year-old said. "Many are still missing. We are afraid to enter homes sometimes lest we find more people dead."

On Tuesday, he and other family members buried the clan's dead in the mass grave.

On the way to the grave, Abdel Hameed Alyousef asked a cousin to video his farewell to his children as he sat in the front seat of a van being loaded with bodies.

When the airstrikes hit, he was with his twin daughter and son. "I carried them outside the house with their mother," the 29-year-old shop owner told the AP. "They were conscious at first, but 10 minutes later we could smell the odor."

The twins and his wife, Dalal Ahmed, fell sick.

He brought them to paramedics and, thinking they would be OK, went to look for the rest of his family. He found the bodies of two of his brothers, two nephews and a niece, as well as neighbors and friends. "I couldn't save anyone. They're all dead now," he said.

It was only later that his relatives could bring themselves to tell him that his children and wife had also died.

"Abdel Hameed is in very bad shape," said his cousin, Alaa Alyousef. He's being treated for exposure to the toxin, "but he's especially broken down over his massive loss."