UN Security Council meets on US strikes in Syria 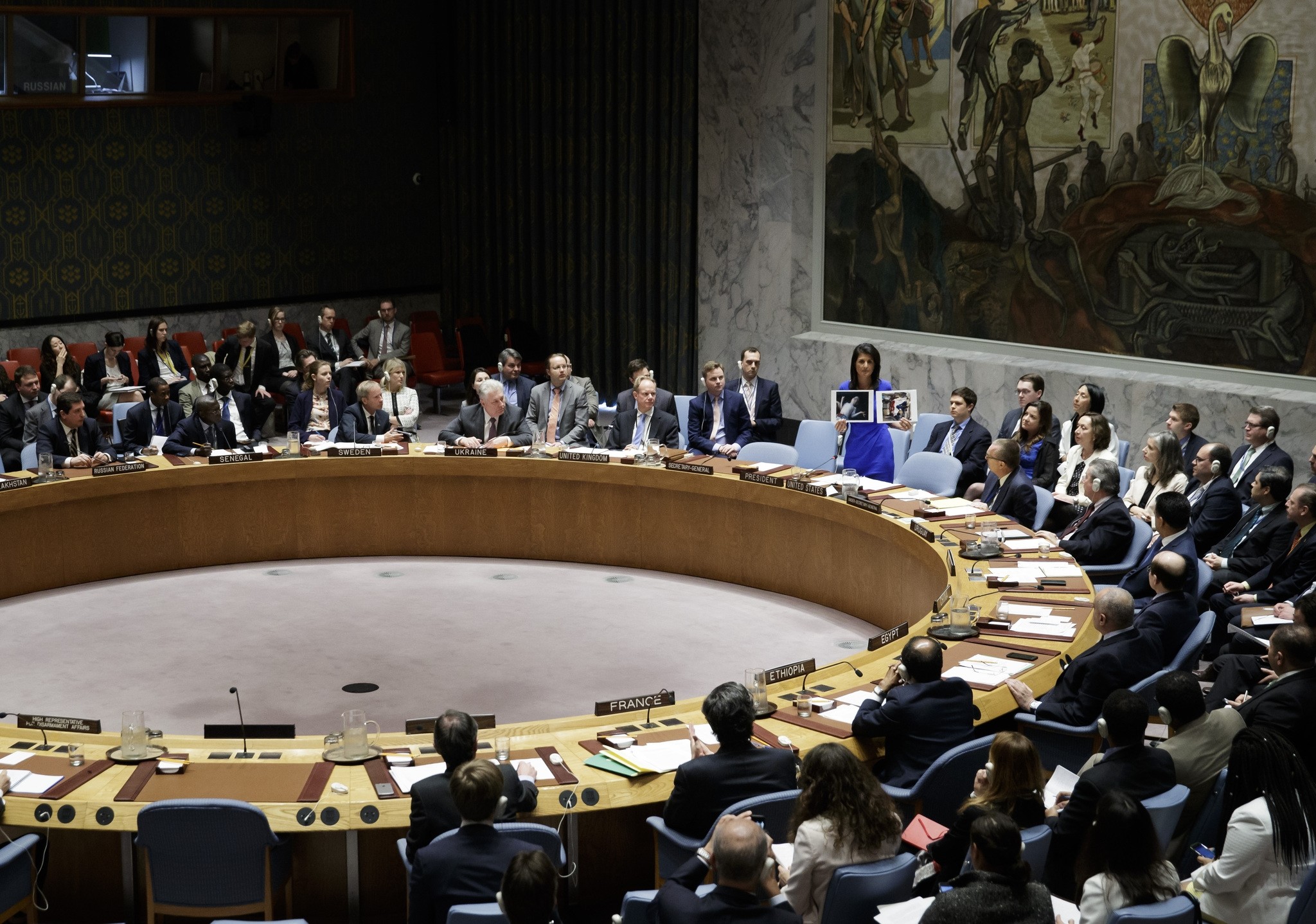 Nikki Haley (standing at right) holds up pictures of victims of a chemical attack in Syria during an emergency meeting of the United Nations Security Council. (EPA Photo)
by Daily Sabah with Agencies Apr 07, 2017 12:00 am

The United Nations Security Council met in an emergency session at 1130 EDT (1530 GMT) on Friday after the United States launched a barrage of missile strikes on a Syrian regime air base in retaliation for a suspected chemical attack.

Assad has been "put on notice" by the U.S. air strike over a deadly toxic gas attack, Britain's U.N. Ambassador Matthew Rycroft said on Friday, describing it as a "proportionate response to unspeakable acts."

"Without Russia's seven vetoes in the Security Council, defying the views of other members of this council, Assad would not have faced sanctions and justice," Rycroft told the 15-member council.

Stressing his country's strong support for the U.S. air strikes on Syria and harshly repudiating Russia for its protection of Assad's regime, Rycroft demanded that Russia "abandon its failed strategy," end its "protection of a war criminal," and join Western powers seeking to impose sanctions

He said, "Russia sits here today humiliated by its failure to bring to bear a puppet dictator entirely propped up by Russia."

Rycroft said Assad showed in the chemical weapons attack on the town of Khan Sheikhoun "that he is capable of redefining horror."

He said the United Kingdom will work in the U.N. Security Council to ensure that those responsible are brought to justice.

France also chimed in, saying the U.S. response was "appropriate" and laid the blame on Bashar Assad.

The U.S. ambassador to the United Nations said that while the Syrian regime is responsible for Tuesday's chemical attack, Iran and Russia bear "heavy responsibility" for propping up and shielding Bashar Assad.

Nikki Haley told the U.N. Security Council Friday that Russia is supposed to be a guarantor that all chemical weapons were removed from Syria under a 2013 agreement.

"The world is waiting for Russia to act responsibly in Syria."

Meanwhile, Russia's deputy U.N. ambassador, Vladimir Safronkov, strongly criticized what he called the U.S. "flagrant violation of international law and an act of aggression" whose "consequences for regional and international security could be extremely serious."

He said Russia firmly stands by the Syrian regime, calling it the main force against terrorism and saying it deserves the presumption of innocence in the chemical weapons attack.

But Safronkov offered a way ahead for the Trump administration — stop attacks, pursue a political settlement, and work jointly to combat "the terrorist threat."

Russia had demanded an emergency meeting after angrily denouncing the military action as an "aggression against a sovereign state.

86 people including at least 27 children died in the suspected attack on Tuesday in Khan Sheikhun, a rebel-held town in Syria's Idlib province.

Results from post-mortems performed on victims point to exposure to the deadly sarin nerve agent, according to Turkish health officials.

The council meeting was called by Bolivia, which also branded the U.S. strikes a violation of international law.

"This is not what international law is all about," he told reporters.

The Assad regime said at least six people were killed, and several wounded in the attack. Activists say the air base, hangars, fuel depot and aircraft were badly damaged and the base is no longer in use. A regime official said a fire raged for over an hour.

The attack is the first by U.S. aircraft against the regime forces since the war began. The U.S is also leading an international coalition against Daesh militants in Syria.