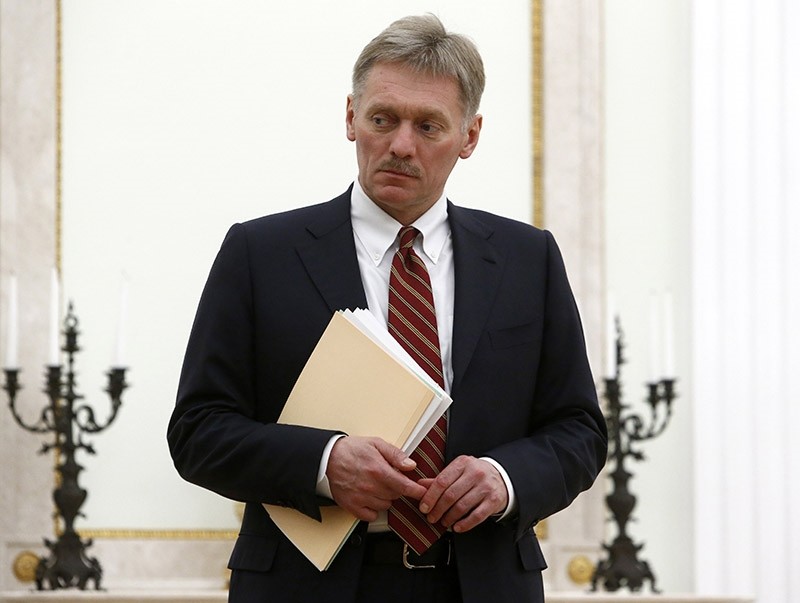 Kremlin spokesman Dmitry Peskov attends for the meeting of Russian President Vladimir Putin with Serbian Prime Minister at the Kremlin in Moscow, Russia, 27 March 2017. (EPA Photo)
by Compiled from Wire Services Apr 07, 2017 12:00 am

Russian President Vladimir Putin believes that the U.S. strike on a Syrian air base is an "aggression against a sovereign state" and has seriously hurt U.S.-Russia relations, news agencies cited the Kremlin as saying on Friday, while Russia said it is suspending deal with U.S. to prevent mid-air incidents over Syria in response to the U.S. strike.

Putin's spokesman Dmitry Peskov was cited as saying that the Russian leader, a staunch ally of the Assad regime, regarded the U.S. action as "aggression against a sovereign state" on a "made-up pretext" and as a cynical attempt to distract the world from civilian deaths in Iraq.

Peskov was quoted as saying that Russia did not believe that Syria possessed chemical weapons and that the U.S. move would inevitably create a serious obstacle to creating an international coalition to fight terrorism, an idea that Putin has repeatedly pushed.

"The Russian side is halting the effect of the memorandum for prevention of incidents and ensuring safety of air flights during operations in Syria which was agreed with the U.S.," a statement by the Russian foreign ministry said.

Meanwhile, Interfax reported that Russians were not not hurt in the U.S. strikes in Syria.

The United States launched dozens of missiles against an airbase in western Syria in response to a suspected chemical weapons attack, which Washington blames on the Assad regime. President Donald Trump said the move was in the U.S. national security interest.

The Russian military says it will help Syria beef up its air defenses after the U.S. strike on a Syrian air base.

Konashenkov said "the combat efficiency of the U.S. strike was very low," adding that only 23 of the 59 Tomahawk cruise missiles reached the Shayrat air base in the province of Homs.

He said it destroyed six MiG-23 fighter jets of the Syrian air force which were under repairs, but didn't damage other Syrian warplanes at the base.

Konashenkov added that the base's runway also has been left undamaged.