Why did the Syrian regime use chemicals in Idlib? 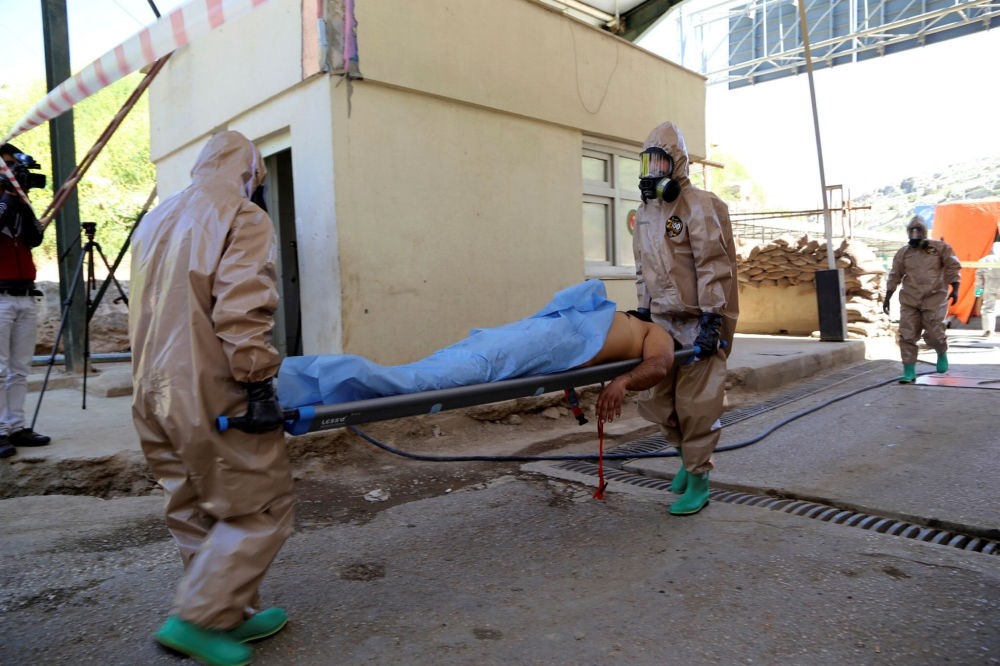 The regime, knowing from past experiences, is quite aware that this attack will be forgotten in a few weeks, since the international community has declared its intention on not putting its focus on removing Bashar Assad but instead on erasing Daesh by supporting the PKK terrorist group's official Syrian branch the Democratic Union Party (PYD) against the threats posed by radical groups like Jabhat Fateh al-Sham and Ahrar al-Sham in Idlib.

Before the use of chemical weapons in Idlib on Tuesday, which left more than 70 dead and 500 wounded, the U.S. had said that removing Assad from power was not the priority. U.S. Secretary of State Rex Tillerson said last week that Syrian people were going to decide on Assad's future. Besides the statements, the close relations between U.S. President Donald Trump and Russia might have encouraged the regime as well.

"As newly inaugurated president Donald J. Trump takes the reins of U.S. Syria policy, he will have to decide whether to pursue Western efforts to hold Assad accountable and force Putin to uphold his end of the deal, at the risk of exhausting conflicts; or whether he should let Putin have his way and try to extract the United States from its entanglements in Syria. His choices, and Putin's, will have important consequences not only for Syria but also for Russian-American relations and for global norms against the use of chemical weapons," Aron Lund had written for the Century Foundation last February, showing that Trump was indecisive on what to do in Syria.

Since the EU has for some time remained silent on the crimes in Syria and focused on the migration issue, Assad might have thought to crush the opposition groups as well as civilians in opposition-held areas like he did in Aleppo on November.

As a result of the massacres in Aleppo, the city had been cleared from dissidents and armed opposition groups, who fled to Idlib. While President Recep Tayyip Erdoğan warned several times that the same situation would be seen in Idlib as well, the international community had remained silent.

"These weapons are frightening and disorienting to the targeted populations, and they also highlight to the local population… that there is no international limitation on regime behavior and that resistance is therefore futile," Faysal Itani, a senior fellow with the Atlantic Council's Rafik Hariri Center for the Middle East, told reporters.

Besides the idea that Assad would not be targeted due to the use of chemical weapons, his regime might have been planning to enjoy free rein from the fear it spread among people. As it happened in Aleppo and other provinces, the regime will force civilians to flee to Turkey.

After the civilians escape, the regime and its allies will strengthen the propaganda message that radical groups were in charge in Idlib and its environs, since the West has already designated these groups as terrorist entities.

Be they terrorist or not, the regime will try everything to take Idlib, just as the PYD plans to march to Raqqa. While the regime and Russia refuse to share Syria, it is likely that country will be divided into two, creating an autonomous region in the northeast, controlled by the PYD.

The Hague-based Organization for the Prohibition of Chemical Weapons (OPWC) said previously it had evidence of the use of chlorine gas in repeated attacks by regime forces in Syria. The OPWC said there had been a "spate of new allegations" of chlorine attacks several times. The regime had agreed to destroy its chemical weapons in 2014, following global outrage over a sarin gas attack in Ghouta, a suburb of Damascus, in August 2013 that killed hundreds, the worst attack of its kind for quarter of a century.

However, opposition groups claimed the regime had not handed over its entire chemical stockpile and still uses chemical weapons against its people. Although the U.S. and other Western countries attempted to prevent the regime from using chemical weapons, with former U.S. President Barack Obama designating the use of chemicals as a red-line and even considered military intervention, there has been no action.

The regime denies it used chemical weapons as it did so before and its main supporters Iran and Russia condemned the attack, saying there was no evidence that the regime was responsible. The harsh criticism from EU countries and the U.N. seem to be limited to rhetoric. Therefore, Assad believes that his regime will not suffer punishment for the use of the deadly chemicals, as he plans to empty Idlib and take over Syria. Yet this time he was wrong as the U.S. targeted a Syrian military airfield in the first direct military action on his regime.
RELATED TOPICS