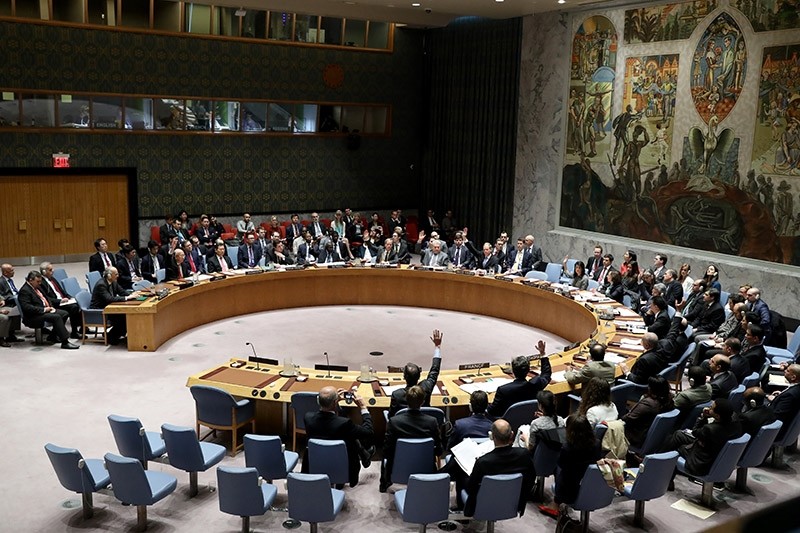 Members of the United Nations Security Council (UNSC) vote on a draft resolution condemning the Assad regime use of chemical weapons during a Security Council meeting at UN headquarters in New York, New York, USA, 12 April 2017. (EPA Photo)
by Compiled from Wire Services Apr 12, 2017 12:00 am

Russia again cast a veto at the United Nations Security Council to shield the Assad regime, blocking a Western bid on Wednesday to condemn a deadly gas attack in Syria and push the regime to cooperate with investigators.

Britain, France and the United States put forward the measure in response to the suspected sarin gas attack in Khan Sheikhun on April 4 that left 87 dead, including 31 children.

China, which has vetoed six resolutions on Syria since the civil war began six years ago, abstained from Wednesday's vote, along with Ethiopia and Kazakhstan. Ten countries voted in favor of the text, while Bolivia joined Russia in voting no.

Russia imposed its veto as US Secretary of State Rex Tillerson said after talks in Moscow that there was a "low level of trust" between the United States and Russia.

The proposed resolution would have condemned the alleged attack and expressed the council's full backing to investigators from the Organization for the Prohibition of Chemical Weapons (OPCW).

The draft specifically would have demanded that the Assad regime provide flight plans, flight logs and other information on its military operations on April 4, hand over the names of commanders of any aircraft and provide access to air bases to UN investigators.