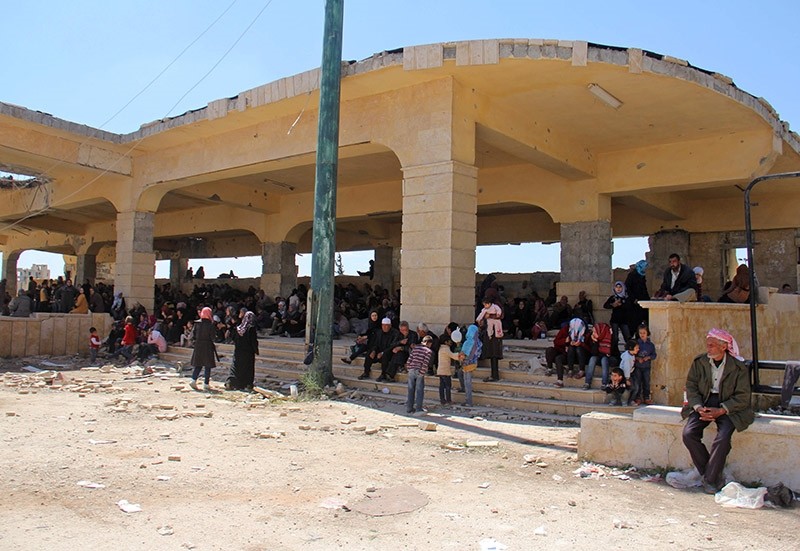 Syrians civilians and pro-regime fighters, from the regime-held towns of Fuaa and Kafraya sit in the shade of a building at the opposition-held transit point of Rashidin, on April 20, 2017, as they wait for the evacuation to resume. (AFP Photo)
by Apr 21, 2017 12:00 am

Hundreds of frightened Syrian evacuees were on the move again Friday after being blocked for 48 hours at a transit point where a bomber killed dozens of their fellow townspeople, a monitor said.

Some of the 60 buses carrying civilians and fighters from the besieged regime-held towns of Fuaa and Kafraya left the marshalling area in opposition-held Rashidin, the Syrian Observatory for Human Rights said.

Some of the 11 buses evacuating civilians and fighters from Zabadani and two other opposition -held areas around Damascus were also on the move, the Britain-based monitoring group added.

A total of 3,000 evacuees left their homes in Fuaa and Kafraya at dawn on Wednesday as part of a deal under which residents and fighters are also being evacuated from the opposition-held areas surrounded by regime forces.

The evacuations began last week but were delayed after Saturday's suicide car bombing killed 126 people, 68 of them children, at the transit point in Rashidin.

The process resumed on Wednesday but evacuees were forced to spend two nights in their buses at the marshalling area following an 11th-hour opposition demand for the release of prisoners held by the Assad regime.