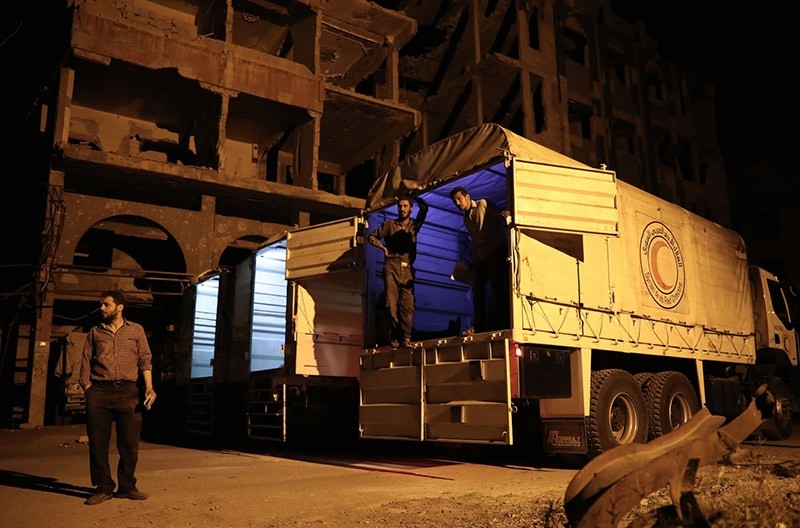 People prepare to unload supplies from a Syrian Arab Red Crescent (SARC) truck part of a SARC and UN aid convoy in the rebel-held town of Douma, on the eastern outskirts of Damascus, early on May 3, 2017. (AFP Photo)
by May 03, 2017 12:00 am

An aid convoy of food and medical supplies has reached the besieged Syrian town of Douma for the first time since October, the International Committee of the Red Cross (ICRC) said on Tuesday.

Along with the United Nations and the Syrian Arab Red Crescent, the ICRC went into Douma with 51 trucks loaded with aid for 35,000 people, it said on Twitter.

A U.N. official in Syria said the convoy had entered late at night, carrying food rations, health supplies and other emergency items, and the mission was still ongoing.

The U.N. had said in March that fighting around Syria's capital, Damascus, cut 300,000 people off from aid in the opposition-held suburbs of eastern Ghouta, under siege by government forces since 2013.

Food stocks are dwindling and informal supply routes were cut in the pocket of farms and towns near Damascus. Douma has not received any U.N. aid since October and supplies have not entered Kafr Batna since last June, the U.N. has said.

U.N. Syria humanitarian adviser Jan Egeland, who had called on the warring sides to allow aid in, said last month it was "very, very urgent" to get to eastern Ghouta where 400,000 people live.