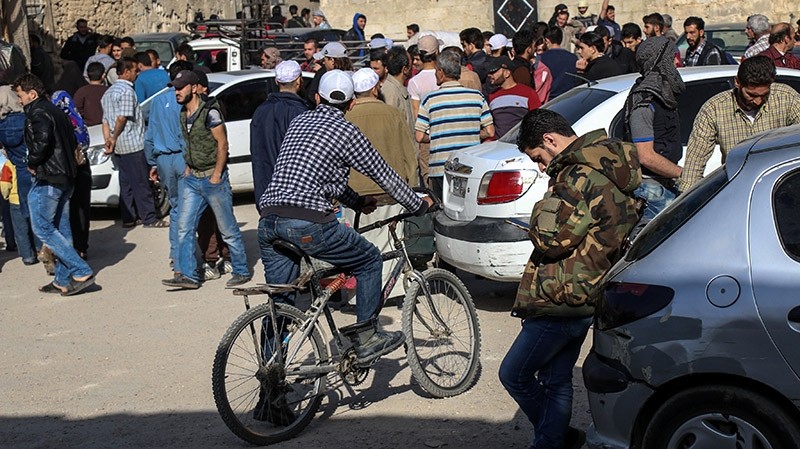 Syrian opposition fighters and their families gather at a staging point in the Barzeh neighborhood of the capital Damascus on May 8, 2017, as they wait to be evacuated. (AFP Photo)
by May 08, 2017 12:00 am

Hundreds of Syrian opposition fighters began a process of leaving the besieged Damascus suburb of Barzeh on Monday as part of an evacuation deal agreed with the Assad regime-e, regime television and a war monitor reported.

Regime-affiliated Ekhbariya television cited its reporter there as saying the evacuation of fighters from Barzeh for the oppositon-held Idlib province in northwest Syria had begun to be implemented but without giving further details.

The Syrian Observatory for Human Rights, a Britain-based war monitor, reported that buses had arrived in Barzeh at dawn and a group of hundreds of fighters and their family members had started to board them.

The Observatory said more people would leave Barzeh over the coming days as part of the same deal.

Barzeh is in northeast Damascus near the opposition-held Eastern Ghouta oasis district of towns and farms and has been the site of intense fighting between the opposition and the regime in recent months.

On Sunday, the army advanced under intense bombardment in the Qaboun district, which adjoins Barzeh in the same besieged enclave, the Observatory said.

A military media unit run by the armed Lebanese Shi'ite group Hezbollah, an ally of the Assad regime, reported on Monday that several Red Crescent ambulances had also arrived at the opposition-held towns of al-Foua and Kefraya near Idlib.

Those two towns were part of a mutual evacuation deal that also included two towns besieged by regime forces and involved exchanging thousands of people between the warring sides last month.

The Assad regime has promoted the use of such evacuations, along with what the regime calls "reconciliation" deals for opposition-held areas that surrender to the regime, as a way of reducing bloodshed.

However, the United Nations has criticized both the use of siege tactics which precede such deals and the evacuations themselves as amounting to forcible displacement.

Many of those who have left other besieged areas of Syria have also relocated to Idlib, a mostly rural province abutting the Turkish border which is a major opposition stronghold.