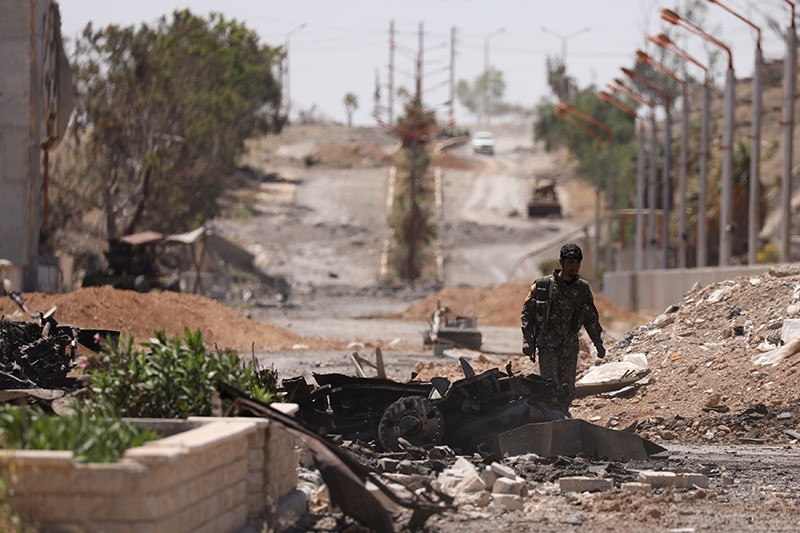 A Syrian Democratic Forces (SDF) fighter walks through a damaged street in the town of Tabqa, after SDF captured it from Daesh militants this week, in Raqqa, Syria, May 12, 2017. (Reuters Photo)
by Compiled from Wire Services May 13, 2017 12:00 am

Syrian opposition activists and media say US-backed Syrian Democratic Forces (SDF) are closing in on the de-facto capital of the Daesh group in Syria, seizing a cotton factory only a couple of miles north of the city.

The Raqqa Campaign, a Facebook page affiliated with the SDF, says the fighters seized the cotton factory, 2.5 miles (4 kilometers) north of the city on Saturday. Kurdish media also report the factory is captured.

The Britain-based Syrian Observatory for Human Rights says the Syrian Democratic Forces, backed by airstrikes from the U.S.-led coalition, are on a multi-pronged offensive, clashing with militants northeast and northwest of Raqqa.

The SDF said Friday they expect to advance on Raqqa this summer, following their capture of a strategic town and dam west of the city.

Turkey, a key NATO ally bordering Syria, has repeatedly objected using the SDF for the Raqqa offensive as the People's Protection Forces (YPG), the armed wing of PKK terrorist group's Syrian offshoot PYD, forms the backbone of the SDF. Turkey says the presence of YPG will further alienate Arab tribes in the region, and advocates the use of a local forces trained and equipped by the anti-Daesh Coalition.

Meanwhile, the regime forces resumed their advance in eastern Aleppo countryside and have taken full control of a small airbase that was under Daesh control, aided by heavy aerial bombing by Russian and Syrian air forces, pro-state media and an army source said on Saturday.

The al-Jarrah airport is located in the Daesh militants' remaining enclave in eastern Aleppo countryside, a region where they have mostly lost control to competing forces ranging from the regime forces, U.S.-backed SDF to Turkey-backed Free Syrian Army (FSA).

The airport was briefly stormed by the army's elite forces last March, but Daesh repelled that attack on the base they had held since 2014.

Russian and Syrian jets have also intensified their attacks on the town of Maskaneh, the last main town in the region west of the Euphrates River in eastern Aleppo countryside, former residents in touch with relatives said.

Dozens of civilians have been killed since last week in the aerial bombing of the remaining villages and towns in the area still in the control of the militants, the UK-based Syrian Observatory for Human Rights said.