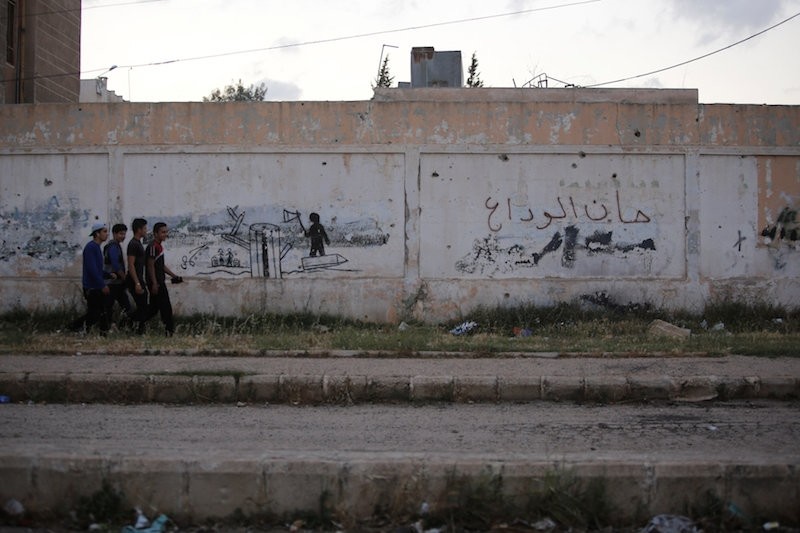 Rebel fighters and their families evacuated the besieged Waer district in central Syrian's Homs, after an agreement was reached between rebels and Syria's army. The text on the wall reads in Arabic:, Its time for goodbye., Reuters Photo
by Associated Press May 21, 2017 12:00 am

The Syrian regime announced Sunday the country's third largest city Homs— once named the capital of the revolt against President Bashar Assad— had been cleared of armed opposition for the first time in more than five years. The announcement follows the completion of the evacuation of the last rebel-held neighborhood.

Besieged for four years, al-Waer was the last opposition-controlled district in Homs. The evacuation of armed fighters, their families and opposition activists, began several weeks ago, following a deal that effectively surrenders the district following the tightening siege coupled with a military campaign.

Similar deals have been reached recently, bringing a number of neighborhoods near the capital, as well as the country's former commercial center and largest city Aleppo country, back to government control.

It is a major shift from a few years ago when the armed opposition was on the rise, threatening the capital and holding on to more than half of Aleppo.

Homs city, once labeled the capital of the anti-Assad revolution, has been at least partially controlled by the rebels since the early days of the revolt that broke out in 2011. But government forces recaptured one Homs neighborhood after the other, finally isolating the rebels in al-Waer.

The Britain-based Syrian Observatory for Human Rights said over 20,000 people were evacuated from al-Waer to the rebel-held areas in the country's north over the past several weeks.

Rebels still control areas north of Homs city while the government is on the offensive against Islamic State militants to the south.

The myriads of Syria's opposition and armed rebels are now concentrated in the rebel-held northern province of Idlib, and in rural Aleppo along the border with Turkey. Islamic State militants still hold territory in eastern and northeastern Syria and south of Homs city.

On Sunday, a twin explosion, believed to be caused by a suicide attack, in Idlib province Sunday killed at least 14 members of a powerful ultraconservative insurgent group, Syria opposition activists said.

It was not clear who was behind the attack. Ahrar al-Sham, the targeted group, blamed the Islamic State group for the attack, saying the attacker arrived in the village of Tal Touqan, to the east of the provincial capital, where the group has a center. Ahrar al-Sham said the attacker blew himself and his motorcycle up amid the fighters, killing and wounding dozens.

The opposition-operated Baladi News Network quoted a witness as saying at least 15 people were killed in the attack. The Observatory said 14 were killed, including a local leader, in the twin attacks.

Northern Idlib is an opposition stronghold, but an al-Qaida-linked group has the most sway there. The group has also been at odds with Ahrar al-Sham, the group targeted in the attack.

Clashes between the two groups earlier this year were triggered by a new push for rebels to take part in Russia-backed talks to bring about cease-fire. The talks also called for rebel groups to battle against the al-Qaida-linked group, which labeled the negotiations as treason. But the two groups are essentially fighting for control over Idlib, the one province in Syria that is totally under opposition control and has a border with the outside world, through Turkey.

The battles that raged in February were considered the worst infighting in years. But the violence has largely subsided as each group keeps control of separate parts of the province.