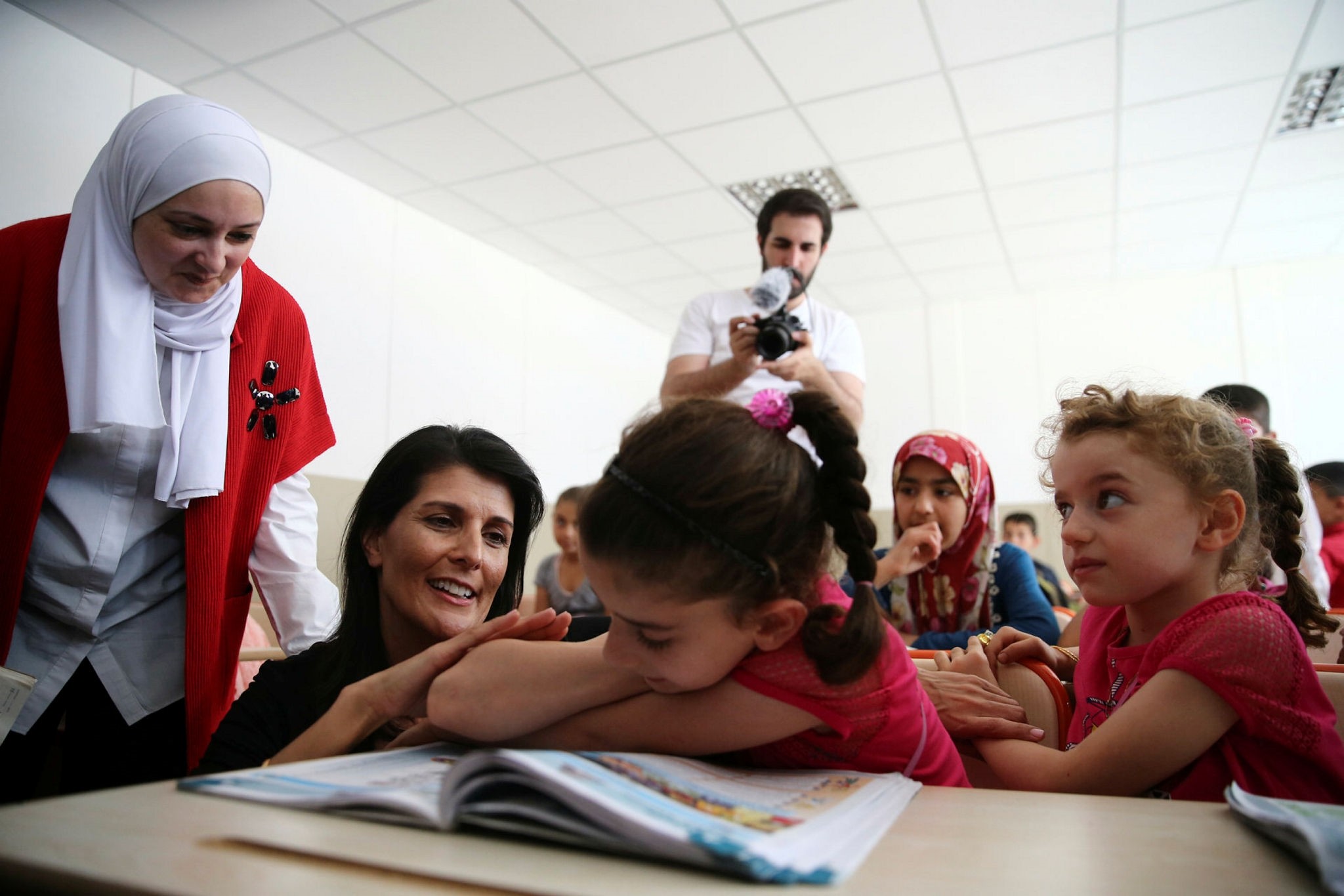 The U.S. ambassador to the United Nations, Nikki Haley, praised Turkish-U.N. cooperation on the Syrian refugee crisis on Tuesday, particularly education and healthcare services, during her meeting with Prime Minister Binali Yıldırım.

"Today we visited a health center that trains Syrian doctors and nurses to practice medicine in Turkey, helping their fellow refugees. This innovative Turkish-U.N. partnership also provides healthcare and counseling services for Syrians who have escaped conflict zones," Haley wrote on Twitter alongside a photograph inside a health facility.

The head of Turkey's Disaster and Emergency Management Authority, Fuat Oktay, and the U.S. ambassador to Turkey, John Bass, also attended the meeting.

Haley also attended a ribbon-cutting for a new U.S.-funded school in the southern Turkish city of Adana, and said that the American people are thankful the U.S. ally is taking in so many Syrian refugees.

The middle school, funded by the U.S. State Department, was built by UNICEF and is run by the Turkish government. It will serve some of the half-million Syrian refugee children enrolled in schools in Turkey.

Turkey, hosting more than 3 million Syrian refugees, has spent around $25 billion helping and sheltering refugees during that time.

Since the Turkey-led Operation Euphrates Shield to rid Syria's northern border area of terrorists, the Turkish government and many Turkish NGOs, including the Red Crescent, have been aiding refugees.

This initiative has not only been taking place in Turkey, but tent cities have been set up in crisis-hit border areas inside Syria, along with distributions of food and other supplies.

The Turkish Red Crescent's humanitarian aid has exceeded TL 2 billion (around $560 million) since the beginning of the Syrian civil war, according to the organization.

A bustle has begun in the stores and bazaars of recently-liberated al-Bab as Ramadan approaches.

With locals slowly making their return to the northern Syrian town that was liberated on Feb. 23 by Turkey-backed Free Syrian Army forces, its population, which fell to nearly 20,000 during three years of Daesh rule, has risen to around 80,000.

The locals say that reconstruction efforts have played a key role in the re-vitalizing process of the town. The social, judicial and security structure of cities in northern Syria that have been liberated from Daesh is being reshaped as the locals welcome a peaceful and terror-free life.

The Free Syrian Police and Free Syrian Rangers have largely ensured security and order in the recently liberated areas, preventing any further unrest. Currently, there are almost 3,800 policemen working in towns and villages under the FSA's control.

The Turkish government is also taking measures to ensure educational access for children in these towns as well. Under Daesh, schools were turned into prisons and torture centers, but since the towns were liberated, schools have been re-opened for education.

Meanwhile, Turkey's Ministry of Education is working to hire teachers to send to the terror-free towns. On the other hand, the Housing Development Administration of Turkey (TOKİ) is also working round the clock to help meet the needs for housing, schools and mosques.