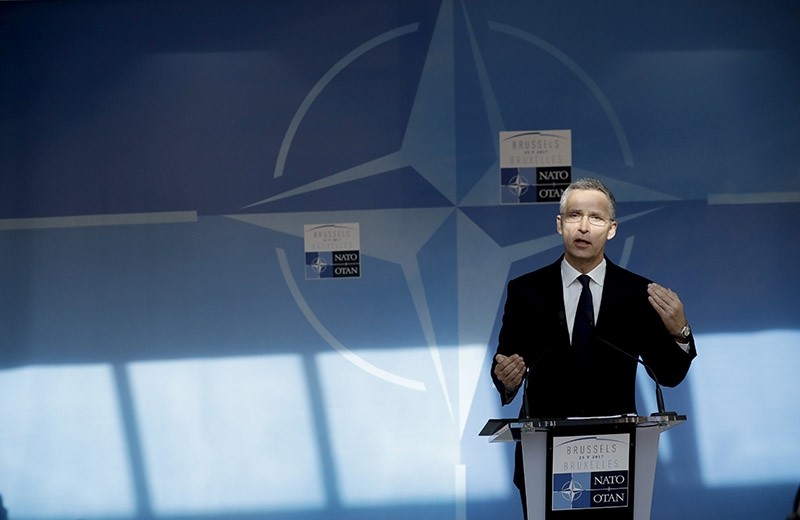 The sun shines on the face of NATO Secretary General Jens Stoltenberg as he speaks during a media conference ahead of a NATO summit in Brussels on Thursday, May 25, 2017. (AP Photo)
by Daily Sabah with Agencies May 25, 2017 12:00 am

"This will send a strong political message of NATO's commitment to the fight against terrorism," Stoltenberg said. "But this doesn't mean NATO will engage in active combat," he added.

Meanwhile, after the NATO ambassadors meeting, a diplomat said that the member state representatives had decided on an action plan on terrorism for the summit, which "includes the accession of NATO to the global coalition against Daesh."

"That's certainly the expectation for all European allies," added the diplomat.

The NATO leaders' summit will take place in Brussels May 25. The main focus of the summit is expected to be the international fight against terrorism, in the wake of the Manchester terror attack that killed at least 22 people and injured dozens more.

Meanwhile, German Chancellor Angela Merkel says she will tell President Recep Tayyip Erdoğan that she plans to withdraw her country's troops from Incirlik Air Base if lawmakers are banned from visiting them, AP reported.

The tension between Turkey and Germany escalated last week after a German parliamentary delegation was not allowed to visit Incirlik Air Base, where German troops are stationed.

The move was in response to Germany's attitude toward Turkish deputies during the recent constitutional referendum period where Turkish officials were barred from holding meetings in Germany, drawing a strong reaction from the Turkish government.