US ready to discuss 'no-fly zones' with Russia, Tillerson says ahead of Putin-Trump meeting 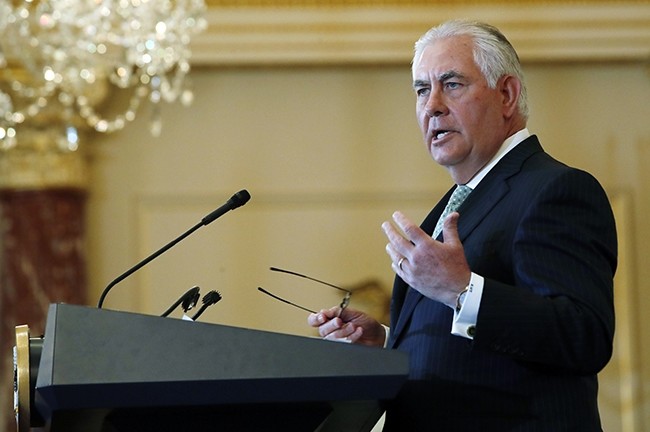 The issue is expected to be discussed during the first meeting between Russian President Vladimir Putin and his U.S. counterpart Donald Trump at the G20 summit this week in northern German city of Hamburg.

In a statement, Secretary of State Rex Tillerson said the U.S. is open to establishing no-fly zones in Syria in coordination with Russia as well as jointly setting up a truce monitoring and humanitarian aid delivery mechanism. The statement came as Trump prepared to meet with Putin and as the U.S. seeks to consolidate gains made against Daesh in recent weeks and prepare for a post-Daesh future.

"[Daesh] has been badly wounded, and is could be on the brink of complete defeat in Syria if all parties focus on this objective," Tillerson said. "In order to complete the mission, the international community, and especially Russia, must remove obstacles to the defeat of [Daesh]."

The U.S. Secretary of State added that if the two countries work together to establish stability on the ground, it will lay a foundation for progress on the settlement of Syria's political future.

The statement made no mention of Assad regime's future. The U.S. largely blames Assad for the six years of civil war and has called on him to step down.

Tillerson also said Russia had an obligation to prevent the use of chemical weapons by Assad regime.

Washington hit a Syrian air base with a missile strike in April after accusing the regime of killing dozens of civilians in a chemical attack. Assad denied it carried out the attack.

Russia is Assad's major ally and Moscow's military support has helped the regime turn the tide in a multi-sided war against Daesh and the opposition.

As the fight against Daesh winds down, Tillerson said Russia has a "special responsibility" to ensure Syria's stability.

He said Moscow needs to make sure no faction in Syria "illegitimately re-takes or occupies areas" liberated from Daesh or other groups.

U.S.-backed forces have surrounded Daesh stronghold in Syria, the city of Raqqa.

Tillerson lauded U.S. and Russia cooperation in establishing de-confliction zones in Syria and said it was evidence "that our two nations are capable of further progress."

"I think the important aspect of this is that this is where we've begun an effort to begin to rebuild confidence between ourselves and Russia at the military-to-military level but also at the diplomatic level," Tillerson said, speaking before he left Washington for Hamburg.

In March, Tillerson said the U.S. would set up "interim zones of stability" to help refugees return home in the next phase of the fight against Daesh and al-Qaeda in Syria and Iraq.

Charles Lister of the Middle East Institute think-tank in Washington cautioned against a U.S. approach in Syria that relied on Russia.

"Russia is neither capable nor willing to give us what we want in Syria," Lister said.

Trump came into office in January seeking to improve ties with Russia that had soured during the Obama administration. But Trump is under pressure at home to take a hard line with Putin due to allegations that Russians meddled in the U.S. election and of possible collusion between the Trump campaign and Russia.