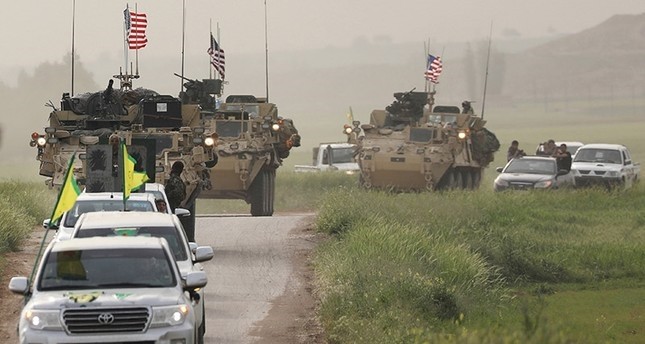 Terrorists from the People's Protection Units (YPG) head a convoy of U.S military vehicles in the town of Darbasiya next to the Turkish border, Syria April 28, 2017. (Reuters Photo)
by Daily Sabah Jul 09, 2017 12:00 am

A U.S.-led air strike mistakenly killed 30 members of the YPG-led Syrian Democratic Forces (SDF) backed by Washington in the Akrishi province of Raqqa on Saturday, according to reports.

A senior official from the SDF told Sputnik that about 30 terrorists were killed in three separate bombardments by the coalition, and at least 15 were wounded. Those killed were all Arab fighters, the official added.

Meanwhile, citizen journalist collective Raqqa Is Being Slaughtered Silently said in a statement that 23 civilians had been killed and 46 had been wounded by the counter-Daesh coalition's air strikes in the region in the last 48 hours.

Turkey considers the Democratic Union Party's (PYD) and its armed wing the People's Protection Units (YPG) to be affiliates of the PKK, a proscribed terrorist organization according to the U.S., Turkey and the EU. The U.S. and the EU do not share Ankara's concerns regarding the YPG.

Continuous U.S. support for the YPG has caused tension in relations between Washington and Ankara while the former says that supporting the YPG is the only option to defeat Daesh and the latter says an alternative could be found with local Arab tribes, backed by countries in the region, rather than supporting and arming "a terrorist group."

This is not the first such incident when the U.S. accidentally bombed its 'allies'. Back in April, the U.S.-led coalition killed at least 18 SDF members in the south of Tabqa, after Syrian regime forces erroneously identified another allied unit as a group of Daesh terrorists.