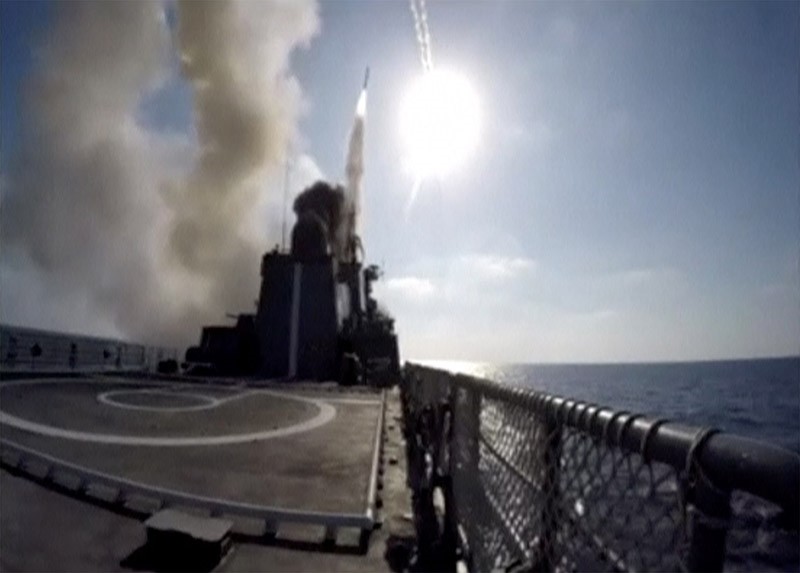 A still image taken from a video footage and released by Russia's Defence Ministry on Sept. 5, 2017, shows the Russian frigate Admiral Essen in the Mediterranean Sea firing Kalibr cruise missiles at Daesh targets near Deir el-Zour. (Reuters Photo)
by Associated Press Sep 14, 2017 12:00 am

Russia's military fired seven cruise missiles Thursday at Daesh targets in the eastern Syrian province of Deir el-Zour as pro-regime forces closed in on the terrorists holed up in the eponymous capital.

Journalists on a trip organized by the Russian Defense Ministry watched from the deck of Russia's Admiral Essen frigate as two submarines launched seven missiles from the Mediterranean Sea.

The Assad regime forces, backed by Russian air cover, last week broke a three-year siege around the city on the Euphrates river.

Russia has provided military backing for Assad's forces since 2015. It has repeatedly fired salvoes of such missiles, from both the sea and mainland Russia.

An Associated Press reporter on the deck of the Admiral Essen frigate saw three missiles and later four more flying into the air, leaving trails of smoke. Two submarines have emerged and were visible on the horizon shortly afterwards.

Backed by an intense aerial campaign, regime and allied forces pushed their way toward the city last week, breaking a nearly three-year siege on its troops on the western edge of Deir el-Zour. It was a major symbolic victory for the pro-government forces. Since then, they have been battling remnants of the militants inside the city, seizing more than 60 percent of it. On Thursday, the pro-government forces were closing in at the terrorists from three sides along the river, pounding al-Bogheliyah neighborhood on the northwestern edge of the city.

The terrorists are currently encircled by Syrian troops from three sides, with their backs to the Euphrates River. However, they still control rural areas outside the city and the border with Iraq.

As Daesh reels from significant losses in Syria and Iraq, there is a race for control of the border with Iraq, currently still in the terrorists' hands. U.S.-backed Syrian Democratic Forces (SDF), which is predominantly led by the PKK's Syrian affiliate, is meanwhile advancing in the surrounding province from the east and north, on the other side of the river.

Bassem Aziz, a spokesman for the SDF said his troops have taken control of an industrial area on the eastern bank of the river, a few miles from the government troops. Aziz said they are about 6 kilometers (4 miles) away from the city's eastern entrance.

In its statement last week, the U.S-led coalition said it will back its partners on the ground to defeat Daesh and "will do our utmost to ensure that (Daesh) terrorists do not move toward the border of our Iraqi partners.

Overnight, a convoy of Daesh terrorists and their relatives being evacuated from the border with Lebanon has crossed into Deir el-Zour from a desert area in central Syria, ending a standoff with the U.S-led coalition that briefly overshadowed the race for the province.

The evacuation, negotiated by Lebanon's Hezbollah group, removed the terrorists from the Syria-Lebanon border but angered Iraq and the U.S., which said they should have been killed on the battlefield not moved to the Iraq border.

The deal reached at the end of August allowed hundreds of terrorists and their families to relocate to Boukamal, an Daesh-held Syrian town near the Iraqi border, in exchange for Daesh -held prisoners and the remains of Lebanese soldiers captured in 2014. One surviving Hezbollah fighter was returned to Lebanon Thursday.

The head of the Britain-based Syrian Observatory for Human Rights Rami Abdurrahman said buses and vehicles carrying about 400 terrorists and civilians crossed into Deir el-Zour province Wednesday. It was not clear where the buses went.

The U.S-led coalition struck the road the convoy was traveling on, leaving it stranded in the desert for about two weeks, though some vehicles were able to slip into militant-held territory. The U.S. said it did not strike the convoy itself because of the presence of civilians.

Last week, the U.S-led coalition said it ended surveillance of the convoy after a Russian request, as Syrian troops advanced against Daesh in eastern Deir el-Zour province.

The proximity of the two forces raises the specter of confrontation, as both sides vie for the border with Iraq and the oil and resources-rich province.