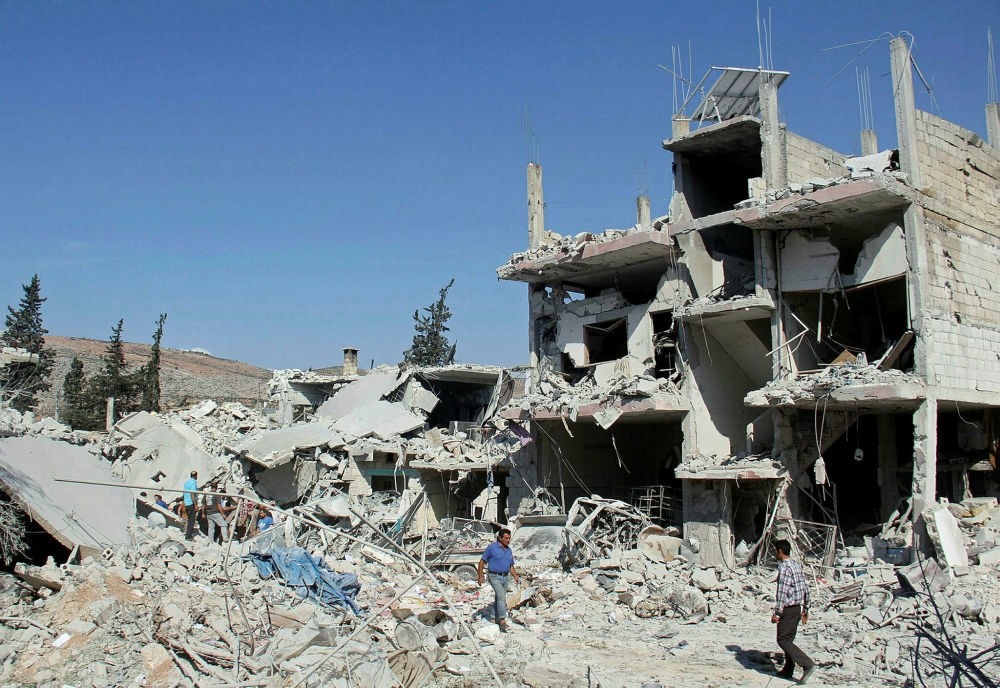 Residents search for survivors amid the rubble of a building following a reported overnight air-strike in Syria's Idlib on Sept. 30.
by Yusuf Selman İnanç
Nov 11, 2017 12:00 am

In a conference in Istanbul, Carnegie Endowment researcher Yezid Sayigh said the Assad regime and the PYD are likely to battle for previously Daesh-held areas

At the conference The Final Battles of Syria's War on Wednesday, Yezid Sayigh said the final battles in Syria might concentrate on previously Daesh-held and currently Democratic Union Party- (PYD) held areas since the regime is reluctant to accept political autonomy for Kurds. The conference was hosted by the Research Center for Global Politics and Administration (GLOPAR) of Istanbul University with contributions by the Raoul Wallenberg Institute. Sayigh works as a senior researcher at the Carnegie Endowment's Beirut branch and is known for his analyses of Syria and the Arab world with particular attention to Palestine,

The moderator, professor Hikmet Kırık, summarized the latest developments in the war and raised the question of what to expect in the short term in the devastated country. Sayigh said there are three conflict areas for potential armed battles – northern Iraq where the Kurdistan Regional Government (KRG) held an independence referendum opposed by almost every actor except Israel; Idlib, where the Turkish military deployed troops to prevent any further aggression by radical elements such as Hayat Tahrir al-Sham (HTS); formerly al-Qaeda-linked Jabhat al-Nusra; and areas captured from Daesh by the PYD's People's Protection Units (YPG) milita. Sayigh said the biggest confrontation would be between the YPG and the regime, which hopes to regain control of the whole country again since the opposition has repeatedly failed to act in concert.

Sayigh cited the Kurdish drive for autonomy, which would be meaningful politically and be more than the rights of collecting taxes, having local police or giving education in mother tongue. He said: "Kurds want local federalism and want it granted as a constitutional right. … No external power will support this demand." On the U.S. position, he said the White House has lacked a concrete policy since the beginning of the war. He said the U.S. might abandon its exclusive support for Kurds, especially when their demands may pave the way for a federal structure.

On the other hand, Russia and Iran have eagerly supported the regime and will attempt to prevent it from losing its latest gains. "The U.S. will prevent the regime from carrying out mass attacks in Rojava, but will not pledge to support autonomy," he said.

He said the KRG lost while trying to gain more as it ignored serious opposition from Ankara and Tehran. Despite the existence of a peaceful way to preserve the peace, internal disputes contributed negatively.

With regard to one of the de-escalation zones in Idlib determined in the Astana talks, he said all of the actors want HTS to be removed. Describing the situation in Idlib as a suspended conflict, he said Turkey's latest moves put Ankara in a more comfortable position since it has the ability to maintain peace talks with Russia and Iran and support opposition groups at the same time.

He concluded that opposition groups in talks with the regime or Russia will be convinced to take part in peace negotiations mediated by Russia with contributions from Turkey and that Kurds will not be allowed to continue to control non-Arab regions and be pushed back to the north. However, the recent crises in Lebanon might delay a final peace in Syria since it has the potential to make several actors confront each other.