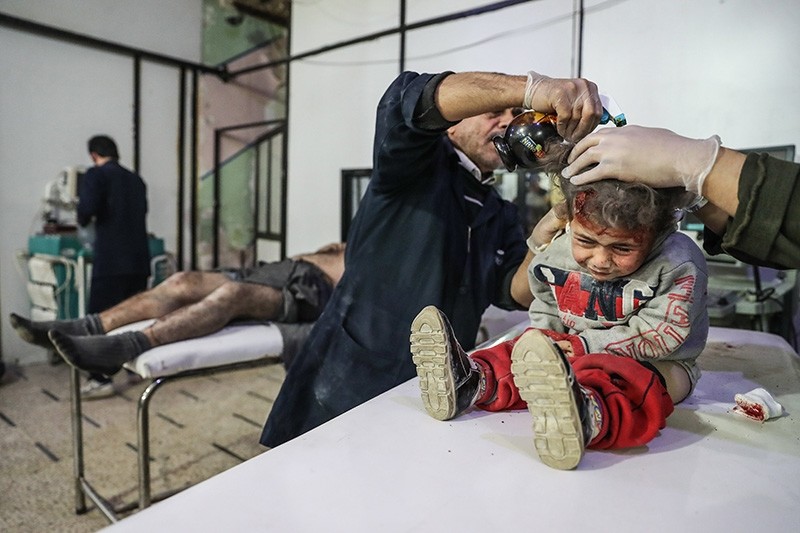 An injured child receives treatment next to white helmets volunteer reportedly injured in airstrikes at a makeshift clinic in Douma, Syria, 17 November 2017 (EPA Photo)
by Anadolu Agency Nov 20, 2017 12:00 am

Assad regime siege on Eastern Ghouta region of Syrian capital Damascus has killed 227 babies this year, according to data from local hospitals.

The new toll takes the number of babies who died of malnutrition caused by the regime blockade in the region since 2014 to 527.

A main opposition stronghold on the outskirts of Damascus, Eastern Ghouta has been under siege by regime forces since December 2012.

The attacks and blockade have left the area's 400,000 residents struggling with malnutrition and all health care facilities non-operational.

According to data from local hospitals, only 15 babies took their last breath in Eastern Ghouta in 2014. The death toll of babies, however, jumped to 112 in 2015 and to 173 a year later.

Last month, Sehar Difda, a one-month old baby, was the last to have died of malnutrition in Eastern Ghouta.

According to activists, thousands of Syrian babies in Eastern Ghouta are at the risk of death as the Assad regime tightened up its blockade in recent months, preventing residents from bringing in their daily needs through tunnels or intermediary merchants.

Eastern Ghouta falls within a network of de-escalation zones -- set up in Syria by Turkey, Russia and Iran -- in which acts of aggression are expressly forbidden.