US, UN confront Russia over attacks in Idlib, Eastern Ghouta 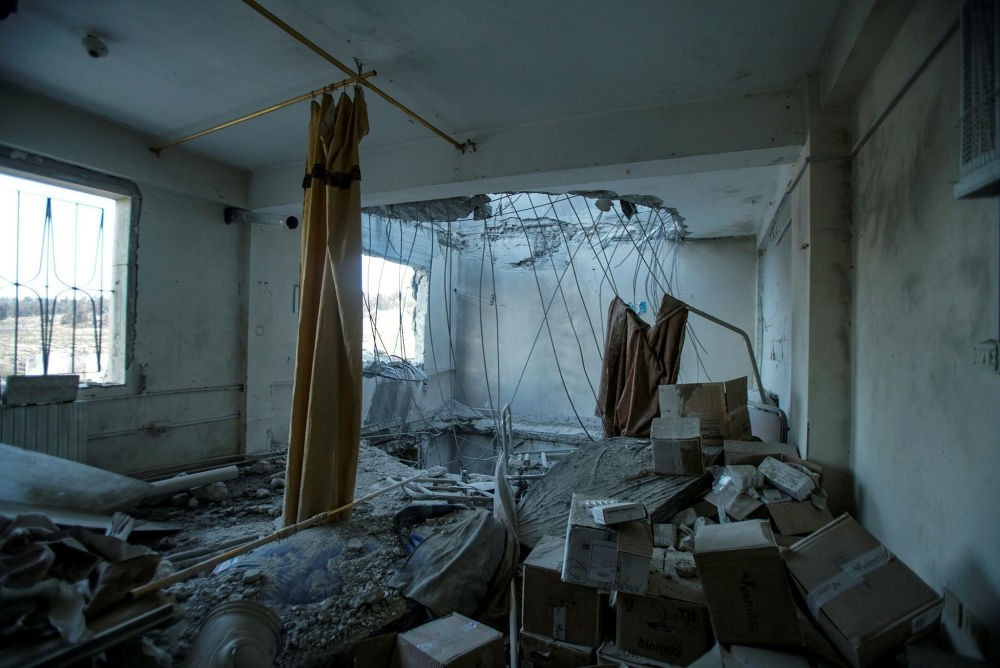 The destroyed hospital of Kafr Nabl went out of service after it was hit in four airstrikes, Idlib, Syria, Feb. 5.
by Yusuf Selman İnanç Feb 07, 2018 12:00 am

Bombings and alleged use of chemical weapons in Idlib and Eastern Ghouta by Russia and the Bashar Assad regime have led to another humanitarian crisis and turned the U.S. and U.N. against Russia

Idlib, a designated de-escalation zone established in the Astana meetings led by Turkey, Russia and Iran, is witnessing a brutal series of attacks by the Bashar Assad regime and Russian air forces, as dozens of civilians were killed as a result of airstrikes and suffocation due to alleged use of chlorine gas. Though the death toll has yet to be verified since the flow of information is limited and often incorrect, videos circulating social media have documented chemically burned bodies of babies and adults alike. Agencies have reported dozens dead, likely more than 30. The U.S. scolded Russia over the attacks, saying it was "gravely alarmed."

In December, Russian air forces alongside Iranian and Iranian-backed militias launched an operation to take control of Idlib, one of the opposition's last strongholds. The operation did not last long after facing resistance. However, following the downing of a Russian warplane by an opposition group, the operation was relaunched. Russia has long been defending the view that Idlib needed to be saved from al-Qaida affiliated groups, ignoring the fact that more than 1 million civilians live in the densely populated city.

Although Russia's Defense Ministry claims that civilians are not being targeted, it is apparent that there have been many civilian deaths, with similar losses also experienced in other parts of the country where Russia carried out operations since it joined the war in September 2015, siding with the regime. The operation also includes ground forces. "The Syrian army and its Iranian Shiite militia allies made a string of gains in the last week after capturing a major airbase that brought them just 12 kilometers from Saraqeb, the first heavily populated city in Idlib within their reach. They were pushing toward the main Damascus-Aleppo highway, the capture of which would cut rebel supply lines and open the door to an army advance into the heart of the province. On Sunday, rebels led by the militant Turkestan group waged a counter attack against the Syrian army and Iranian backed militias near the Abu Duhur air base in southern Idlib. The bombardment from the sky and fears of revenge by advancing Syrian troops and Iranian-backed militias have led to an exodus of tens of thousands of civilians further north to the safety of makeshift camps on the Syrian side of the Turkish border," Reuters reported Monday evening.

The U.S. did not welcome Russia's move on Idlib and condemned the alleged use of chemical weapons. In a statement the U.S. State Department said: "The United States is gravely alarmed by continued allegations of the use of chlorine gas by the Syrian regime to terrorize innocent civilians, this time in Idlib province near Saraqib. We implore the international community to speak with one voice, taking every opportunity to publicly pressure the Assad regime and its supporters to cease its use of chemical weapons and hold those responsible accountable for these brutal attacks."

"The statement also said: "Russia ultimately bears responsibility for the victims in East Ghouta and countless other Syrians targeted with chemical weapons since Moscow became involved in Syria. By shielding the Syrian regime from accountability, Russia has not lived up to its commitments," the State Department said, adding the use of chemical weapons by all parties in Syria must stop. Located in northern Syria near the Turkish border, Idlib was declared a de-escalation zone according to a cease-fire agreement last May reached in Kazakhstan's capital Astana. The Syrian regime, however, has repeatedly violated the deal and has targeted residential areas in opposition-held no-tension zones like Idlib," an Anadolu Agency (AA) report said. In return, the Syrian regime declared that it was deploying a new air defense system in the country's north. "The Syrian army has deployed new air defenses and anti-aircraft missiles to the frontlines in the Aleppo and Idlib areas," a commander in the military alliance fighting in support of Assad said Monday. "They cover the airspace of the Syrian north," the commander told Reuters, describing the deployment as a "message to everyone." "Air defenses had been sent to the frontlines with militants in rural areas of Aleppo and Idlib," Reuters reported yesterday.

Another province where the regime allegedly used chemical weapons was East Ghouta, near Damascus. The province has been besieged for at least two years. The regime previously used chemical weapons in a 2013 bombing in the province, crossing a redline for the U.S. administration for the first time. The airstrike left more than 30 dead. As a result, the U.N. has demanded a cease-fire in both Idlib and East Ghouta.