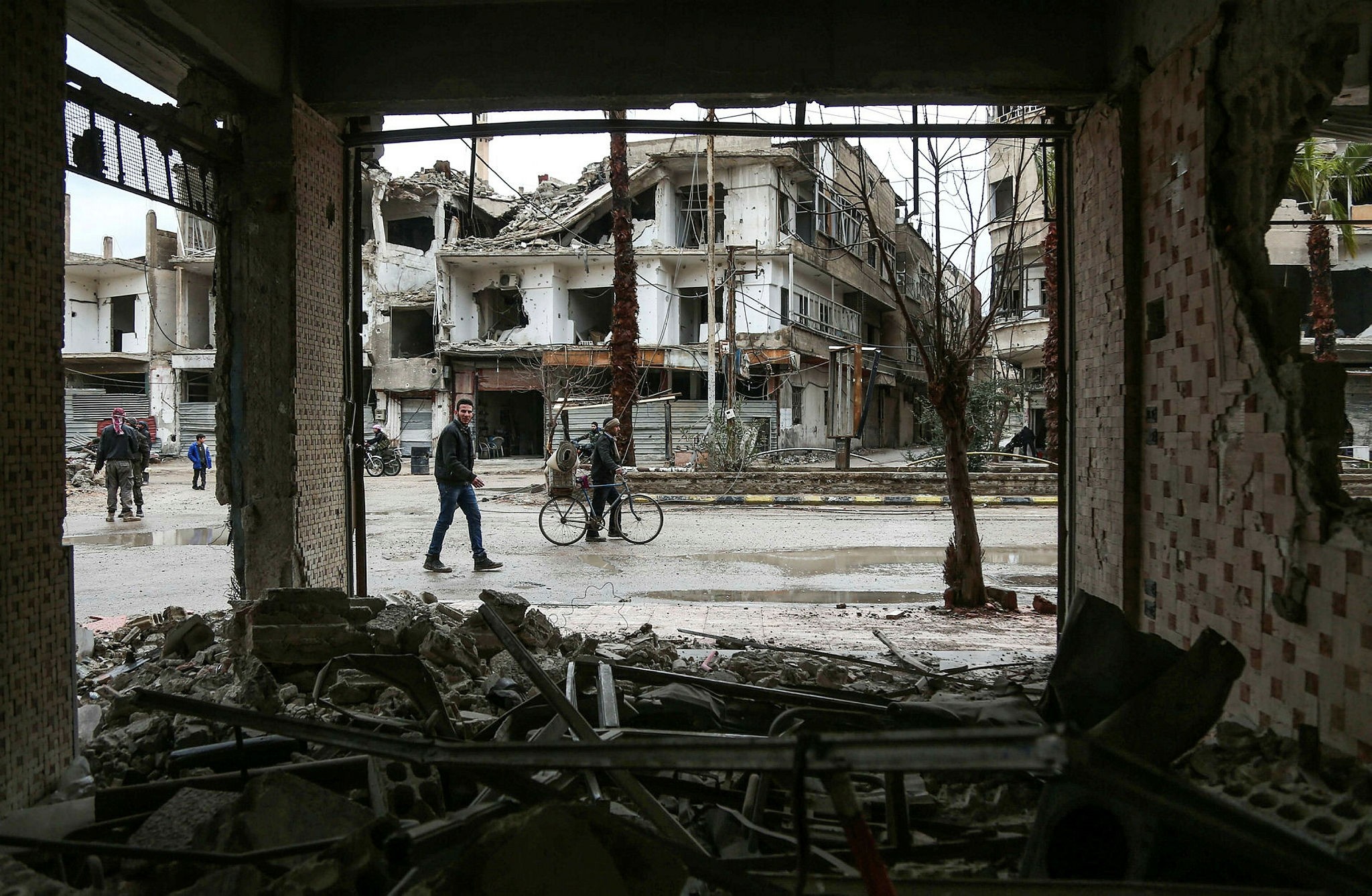 Civilians walking past ruins down a rain-soaked street in the Syrian opposition-held enclave of Arbin in Eastern Ghouta near Damascus, Feb. 17.
by Yusuf Selman İnanç Feb 19, 2018 12:00 am

Due to the existence of several actors in Syria's north and the complicated situation, the Syrian regime has failed to continue its operation in Idlib while it considers its maneuvering capabilities in Eastern Ghouta

The battles in Syria have intensified over the last weeks as the Syrian regime, backed by the Russian air forces and Iranian manpower, renews its efforts to seize opposition-held territories in both Idlib's south and in Eastern Ghouta.

The battle in Idlib is more complicated as there is more than one player in the densely populated city and its rural parts. Formerly al-Qaida affiliated Hayat Tahrir al-Sham and certain moderate opposition groups are located in different parts of the city, blocking the regime's march.

Despite Russia's aerial attacks in the last weeks, Turkey and the U.S. have expressed their strict opposition to the renewal of any fight in the city, which has been designated as de-escalation zone in the Astana meetings last year.

In the latest attacks, under the pretext of erasing the radical elements Russians and the regime have killed more than 200 people whereas an opposition group downed a Russian warplane.

Moreover, Operation Olive Branch, which Turkey is conducting in Afrin to clear its borders from the PKK and its affiliate groups as well as Daesh elements, required de-escalation of tensions in Idlib. Following the failure of a pervasive operation in Idlib, opposition sources claimed that the regime decided to deploy some troops in Afrin, making an agreement with the PKK.

It is not certain to what extent the regime would be successful in playing the PKK card for menacing the regional actors as it has no facilities to move freely in the country's north without Russia's permission.

However, things are easier for the regime in Eastern Ghouta, a besieged city, located near Damascus. Far from any border, encircled with the regime-held areas and being frequently subjected to intra-opposition conflict, Ghouta has less complicated situation in terms of the influences of certain actors.

Despite the fact that as many as 400,000 people live in the city with insufficient medical facilities and nutritional materials, the regime is freer to conduct attacks or to continue blocking the delivery of international aid.

However, the latest international efforts finally convinced the regime to allow an aid convoy to enter the city.

"First @UN and @SYRedCrescent inter-agency convoy this year crossed conflict lines to #Nashabieh in #EastGhouta to deliver food, health and nutrition supplies for 7,200 people in the besieged enclave," the U.N. Office for Humanitarian Affairs (OCHA), tweeted.

Pointing out that the convoy would not be enough at all, Jakob Kern, Syria country director for the U.N.'s World Food Program (WFP), said in his tweet, "We need much more such convoys. Fighting has to stop to deliver much needed aid to all civilians in need."

The latest attacks made the need for aid more acute as the regime and the Russian air forces have carried out several attacks in Eastern Ghouta, ruining certain areas totally.

An Anadolu Agency (AA) report indicated that more families started to live in shelters after their homes were destroyed.

Hussam Beiruti, the head of Haresta's local council, said the regime was attacking Eastern Ghouta out of a misguided desire for revenge, as quoted by the AA.

"Regime forces are taking revenge for the districts they lost to the opposition in the last three months by bombing civilians in Haresta. The regime and some military positions are very close to us, so we're constantly being targeted," he told AA.

"Beiruti said thousands of families left Haresta due to the fierce regime shelling, in addition to some 2,700 families forced to live in shelters and basements. Three months ago 3,900 families lived in the district, but nearly 1,200 families were forced to migrate to other districts," he said.

Beiruti said that the families in the shelters live under difficult circumstances, as many families get no help and have trouble accessing healthcare services.

According to Beiruti, 166 civilians, including 13 children, were killed during regime attacks between last Nov. 14 and Feb. 7. At least 10,800 people live in shelters, according to an AA report.

"Public accounts and photos clearly show that Assad's chemical weapons use is continuing. It is time for all nations to hold the Syrian regime and its sponsors accountable for their actions and support the efforts of the Organization for the Prohibition of Chemical Weapons," McMaster said.