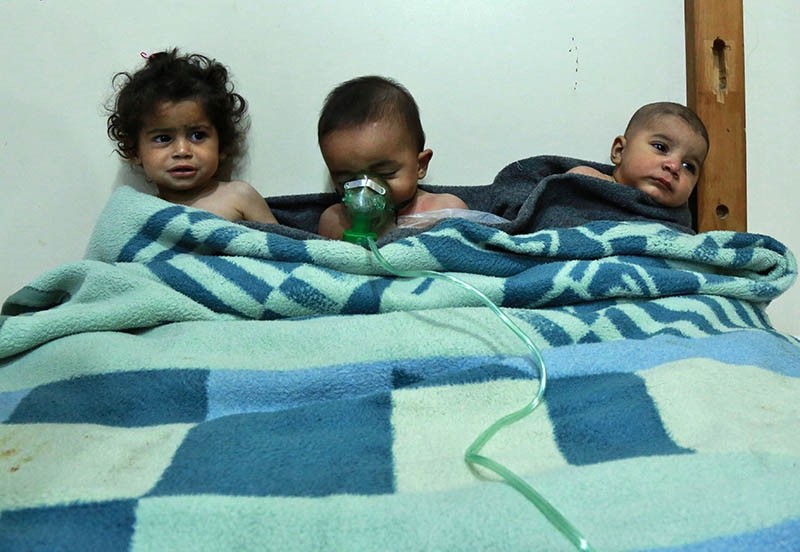 Syrian children receive treatment for a suspected chemical attack at a makeshift clinic on the rebel-held village of al-Shifuniyah in the Eastern Ghouta region on the outskirts of the capital Damascus late on Feb. 25, 2018. (AFP Photo)
by reuters
Feb 27, 2018 12:00 am

The Hague-based Organization for the Prohibition of Chemical Weapons (OPCW) opened an investigation on Sunday into reports of the repeated use of chlorine bombs this month in the district near the Syrian capital, diplomatic sources told Reuters.

Political leaders in France, the United States and United Kingdom said this month they would back targeted military action against Damascus if there were proof of chemical weapons use by forces under Bashar al-Assad.

The investigation comes as Russia ordered the establishment of an evacuation corridor and five-hour daily truce to allow residents to leave eastern Ghouta, where 400,000 people are living under siege and bombardment.

Among the attacks the OPCW's fact-finding team will examine is one on Sunday which local health authorities said killed a child and caused symptoms consistent with exposure to chlorine gas, the sources said.

The OPCW did not immediately respond to a request for comment.

The sources spoke on condition of anonymity because they were not permitted to discuss the operation in public.

Use of chlorine as a chemical weapon is prohibited under the 1997 Chemical Weapons Convention. If inhaled, chlorine gas turns into hydrochloric acid in the lungs and the build-up of fluids can drown victims.

The latest OPCW mission is seeking to determine whether chemical weapons were used in violation of the international weapons convention which Syria signed in 2013 after hundreds died in a massive sarin gas attack in Ghouta.

The OPCW will not assign blame.

The team does not intend to travel to Ghouta because of safety concerns - two previous visits by inspectors in 2013 and 2014 were ambushed - but will gather witness testimony, photographic and video evidence, and interview medical experts.

The U.S. fired 59 cruise missiles at Syria's Shayrat airbase in April, saying it had been used by Assad's forces to carry out a sarin attack on Khan Sheikhoun that killed more than 80 people, many of them women and children.

A U.N.-OPCW Joint Investigative Mechanism, established by the United Nations to identify those responsible for chemical weapons attacks, concluded in 2016 that Syrian government forces had used chlorine as a chemical weapon in three cases.

It concluded last year that Syrian government forces were also behind the sarin nerve agent attack on Khan Sheikhoun. A renewal of the mission's mandate was vetoed by Moscow at the U.N. Security Council.

The use of chemical weapons has become systematic in Syria's seven-year war, but political rifts between Western powers and Russia have hamstrung the United Nations and the OPCW, leaving them unable to act against violations of international law.