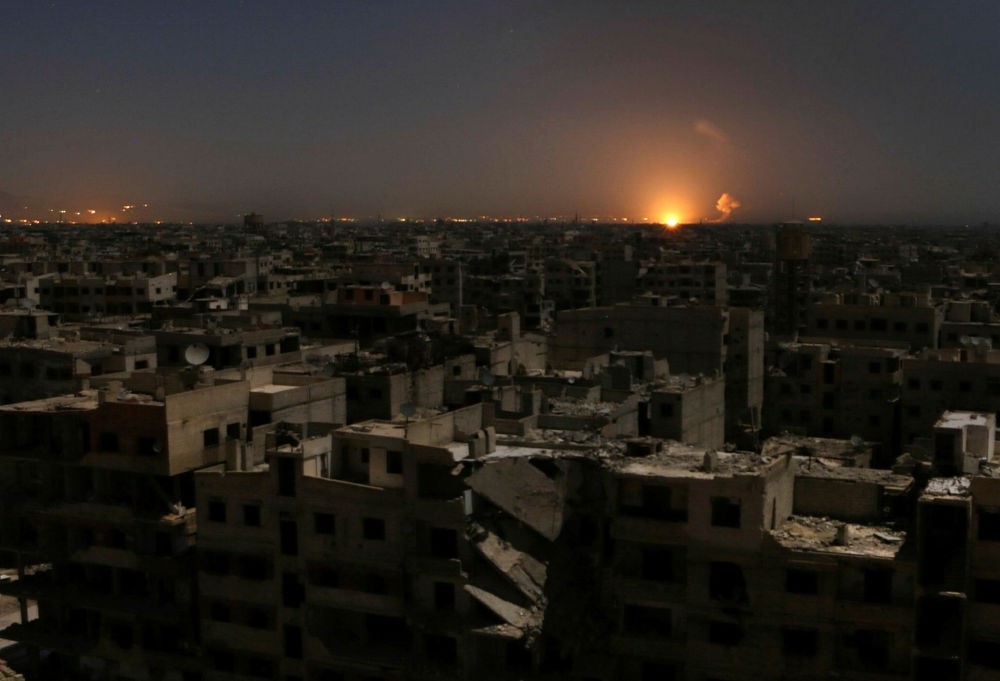 Amid the U.N.'s inability to implement a cease-fire in Eastern Ghouta, humanitarian aid has remained on standby as the Syrian regime continues relentless attacks

The delivery of humanitarian aid to thousands of people in besieged Eastern Ghouta was blocked as regime bombings have continued and civilian deaths have mounted despite a U.N. cease-fire resolution.

Mark Lowcock, the U.N. under-secretary-general for humanitarian affairs, said there has been no change in the situation around the opposition-held enclave in the Damascus suburbs despite a cease-fire resolution Saturday.

U.N. humanitarian chief Lowcock asked council members: "When will your resolution be implemented?" And U.N. political chief Jeffrey Feltman urged all 193 U.N. member states "to use their influence with the parties to ensure implementation of the cessation of hostilities."

Lowcock said convoys are ready to go to 10 besieged and hard-to-reach locations, including 45 trucks with aid for 90,000 people in Douma in Eastern Ghouta. He said that since Feb. 18, over 580 people are reported to have been killed and well over 1,000 injured in air and ground strikes in Damascus, home to about 400,000 people.

"Unless this changes," he declared, "we will soon see even more people dying from starvation and disease than from the bombing and the shelling," as reported by The Associated Press (AP).

Russia ordered a five-hour daily humanitarian pause starting Tuesday to allow civilians to exit Eastern Ghouta. But no civilians have left, and no humanitarian aid has entered.

Russia asked council members to support a presidential statement asking all countries to ensure that armed groups support the Russian humanitarian corridors. The U.S., supported by other Western nations, objected because the statement did not reflect the resolution's demands, according to diplomats who spoke on condition of anonymity because the consultations were private.

Lowcock reiterated the International Committee of the Red Cross' assessment that it is impossible to deliver humanitarian aid in five hours, noting that it often takes convoys with all the required clearances a day just to get through checkpoints.

Kelley Currie, the U.S. ambassador for economic and social affairs, called a five-hour pause "cynical, callous, and in flagrant defiance of the demands" for a cessation of hostilities "for at least 30 days - every day, all day."

"Russia does not get to unilaterally rewrite the terms of the resolution they negotiated and they sat here and voted for," she said.

After a night of intense fighting on the periphery of Eastern Ghouta, Syrian planes early Wednesday bombed several localities in the opposition enclave where an estimated 600 civilians have died since Feb. 18, about a quarter of them children, according to the Syrian Observatory for Human Rights.

According to the Syrian White Helmets civil defense group, airstrikes and ground attacks targeted civilian residents of Marj, Haresta, Madyara, Douma, Kafr Batna, Arbin, Beyt Sava and Semelka in Eastern Ghouta, according to Anadolu Agency (AA). Three people in Beyt Sava, one in Haresta, three in Douma and one in Marj were killed as a result of the attacks.

According to White Helmets spokesperson Siraj Mahmoud, 68 civilians were killed in the area on Feb. 25-27 after the announcement of the U.N. Security Council resolution.

Eastern Ghouta, a Damascus suburb, has been under siege for the last five years, and humanitarian access to the area, which is home to some 400,000 people, has been completely cut off. In the past eight months, Assad regime forces have intensified their siege of Eastern Ghouta, making it nearly impossible for food or medicine to get into the district, leaving thousands of patients in need of treatment.