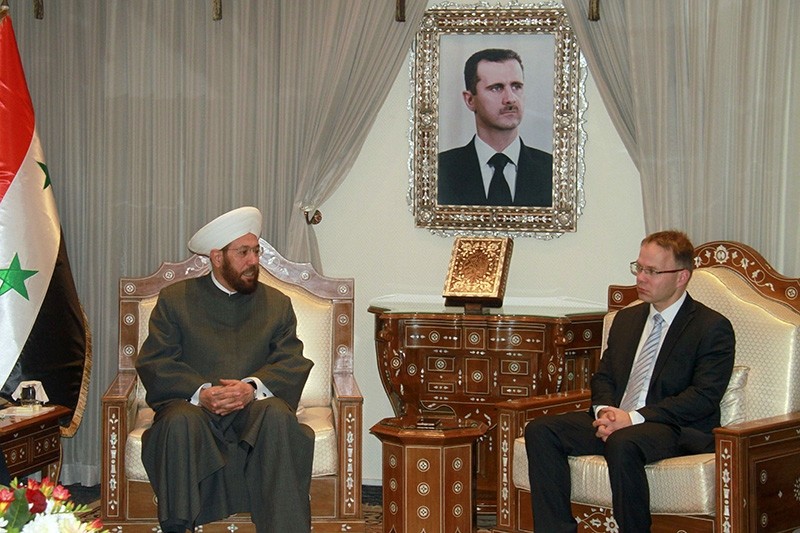 A handout picture released by SANA on March 5, 2018 shows Syrian Grand Mufti Ahmad Badreddin Hassun (L) meeting with a German parliamentary delegation of seven from the Alternative for Germany (AfD). (AFP Photo)
by Mar 06, 2018 12:00 am

Lawmakers from the Alternative for Germany (AfD) are on a fact-finding trip to Syria, said members of the anti-immigrant group, which wants Syria to be classified a safe country of origin in a move that would make it easier to deport failed asylum seekers.

Syrians make up the biggest single group of asylum seekers among the more than a million migrants fleeing war and poverty who have arrived in Europe's largest economy since mid-2015.

The migrant influx, facilitated by Chancellor Angela Merkel's 2015 decision to open Germany's borders, was a boon for the anti-immigrant AfD. It won 12.6 percent in September's election, becoming the biggest opposition party and the first far-right group to sit in the German parliament since the 1960s.

A statement by the lawmakers posted on the Facebook page of Christian Blex, an AfD parliamentarian in the regional assembly of the western state of North Rhine-Westphalia, said that he and six other AfD members - some of them lawmakers in the national parliament - were on a private visit to Syria from March 5.

"The experiences the MPs gain will enable them to rationally evaluate the situation in Syria regarding continuing discussions about classifying it as a safe country of origin, which would also affect the decision about halting deportations of rejected asylum seekers," the statement said.

The AfD regularly lambasts the media as unreliable and the statement said they did not trust German coverage of Syria, and so the lawmakers would seek to find out first-hand about life in liberated areas of Syria and the Assad regime's efforts to provide services for returning refugees.

The AfD in November proposed repatriating half a million Syrian refugees, saying the war was nearly over and that Bashar al-Assad had urged refugees to return home.

However, fighting is continuing in many areas, the United Nations says, in a complex civil war that has killed hundreds of thousands of people since 2011 and forced millions to flee in the worst refugee crisis since World War Two.

Germany has not deported anyone to Syria since 2012 and in December extended that policy until the end of 2018.

The German upper and lower houses of parliament decide which countries go on the list of safe countries of origin.

Blex posted photos of busy roads, a swimming pool and buildings along with a caption which said they had arrived in Damascus and added: "You hardly see any military. There are adverts for mobile phones and televisions. Normal daily life."

Blex said in a separate Facebook posts that the delegation had spoken to representatives of the regime and met Syria's Grand Mufti Ahmed Badr al-Din Hassoun, who Blex said called upon all Syrian refugees to return home. The lawmakers said they also plan to visit education facilities.

The visit takes place as Russia has offered Syrian opposition fighters safe passage out of the Damascus enclave of eastern Ghouta, setting out a deal by which the opposition would surrender its last major stronghold near Damascus to Assad.