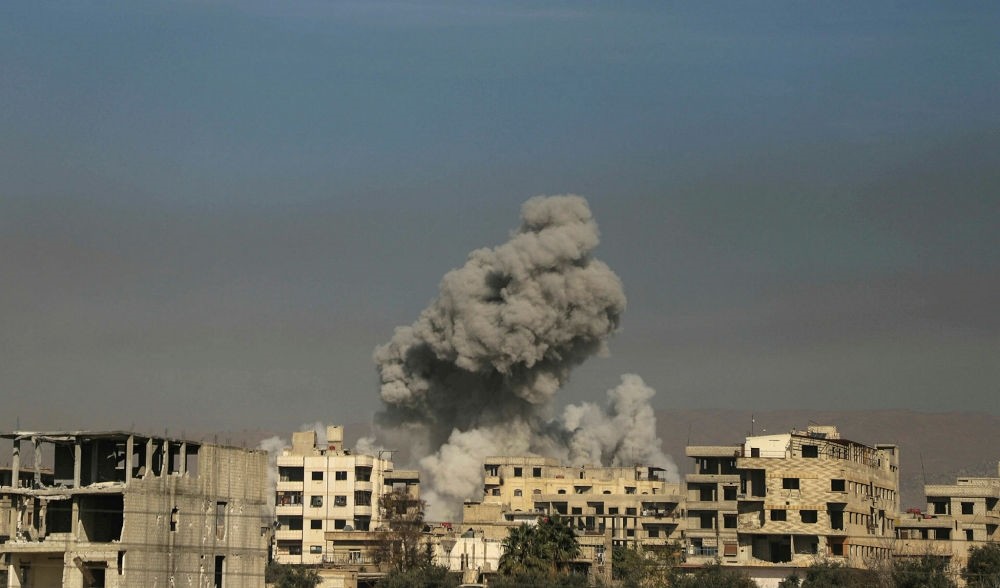 Turkey's intelligence agency is working to evacuate al-Nusra from Eastern Ghouta, presidential spokesman İbrahim Kalın said, urging the Syrian regime and its allies to backtrack on using the military operations to justify the continued bombing of civilians

The Turkish National Intelligence Agency (MİT) plans to remove al-Nusra from besieged Eastern Ghouta, as the main focus remains on the safe evacuation of civilians, Presidential Spokesperson İbrahim Kalın said yesterday. In an interview with state broadcaster TRT Haber, Kalın stressed that the Syrian regime and Russia's military operations against al-Nusra in East Ghouta cannot justify the bombing of civilians in the besieged area. "It is unacceptable that thousands of people are punished collectively with 300-500 terrorists there given as an excuse," Kalın said.

"Our intelligence organization is currently carrying out work to remove al-Nusra and other elements from Eastern Ghouta. Our friends are working to get a result, but it's not very easy."

Syria's besieged Eastern Ghouta region will continue to be a priority issue for Turkey in the coming days, Kalın noted. "Our priority is stopping the airstrikes [there]," he said, ahead of the Astana meeting.

Al-Nusra has been excluded from a Russian plan for five-hour daily ceasefires as the regime and its allies have used this as an excuse to keep up its bombardments.

Regime forces, along with the Russian air forces and Iranian-backed proxy groups, continue their assaults on Eastern Ghouta, a densely populated town, near Damascus, home to 400,000 people. In recent attacks, more than 1,100 people were killed on orders of the regime and its main backers, namely Russia and Iran, which seem determined to erase the presence of the opposition. Yet, while doing so, those most effected are civilians who suffer from the year's long siege as well as the blockade of aid deliveries.

With limited decisive international pressure to stop the attack, Eastern Ghouta appears set to meet the same fate as other areas won back by the regime in lengthy, punishing assaults, where opposition groups and civilians who oppose Assad were finally evacuated in negotiated withdrawals. Damascus appears to be applying tried and tested military means, combining air strikes and bombardment with ground assaults, as it did to recapture Eastern Aleppo in 2016.

The besieged district struggles to find food, and its hospitals are crippled by shortages. The Red Cross said yesterday its president had travelled with a convoy carrying desperately needed food to Syria's rebel enclave of Eastern Ghouta. Hunger-stricken residents in Ghouta's largest town, Douma, received food aid yesterday from a 25-truck aid convoy, carrying enough supplies to feed 26,100 people for a month. "This is just a little of what these families need," the ICRC said, as reported by AFP. It was the third delivery of aid to reach Douma in 10 days. A convoy last week was delivered in two parts, after a first attempt on March 5 was cut short due to heavy shelling.

Last week, a U.N. inquiry commission released a report accusing the Assad regime of committing war crimes in Eastern Ghouta, including the use of chemical weapons on civilians, causing mass starvation, and forcibly preventing medical evacuations. Reports of chemical attacks in Eastern Ghouta have continued to stream in as the Assad regime late Wednesday attacked residential areas in Eastern Ghouta with chlorine gas, according to the Syrian Civil Defense, as reported by Anadolu Agency. The attack came late at night in Eastern Ghouta's village of Hammuriyah, the civil defense group, known as the White Helmets, said on its social media account. The posting said that many women and children were affected by the gas but that their number and condition are not yet clear, since intense attacks by the regime and its supporters are ongoing and the roads are closed.