Fearing everyone around them, Syrians in Raqqa trying to rebuild 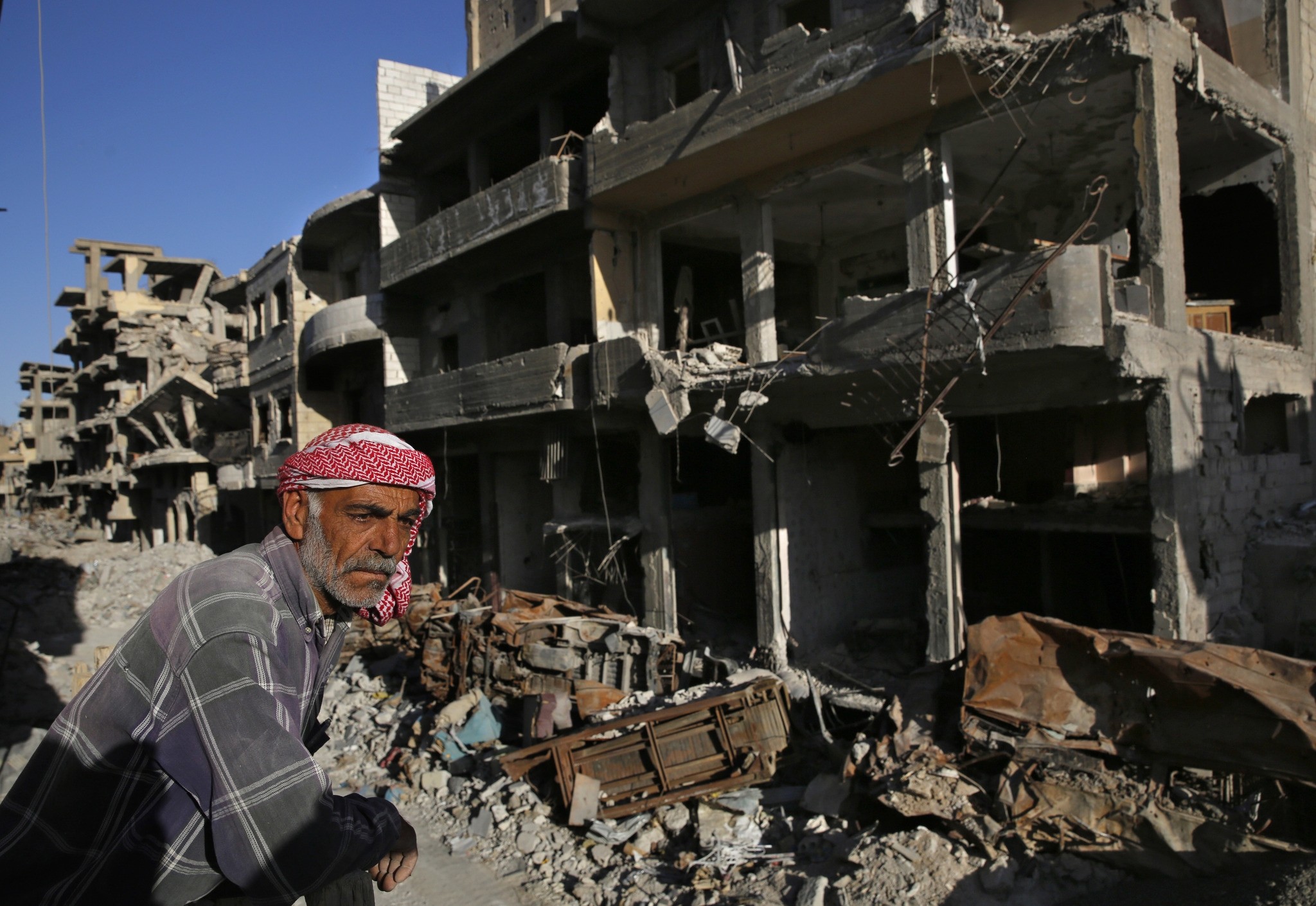 In this Thursday, April 5, 2018 photo, a Syrian man stands between buildings that were damaged last summer during fighting in Raqqa, Syria. (AP Photo)
by Associated Press Apr 09, 2018 12:00 am

Across the ruins of Raqqa, the streets are cloaked in grey, the color of bare cement and rubble left behind by the bombing campaign that finally drove out Daesh militants. Among the people of this Syrian city, the fear, anger and desperation are palpable.

Six months after Daesh's ouster, residents feel they have been abandoned as the world moves on. They are trying to rebuild their lives, but they say they fear everyone around them: the Syrian Democratic Forces (SDF), which is dominated by the the PKK-affiliated People's Protection Units (YPG) that administers the majority Arab city; the Assad regime, which has forces nearby; criminal gangs who kidnap or rob whoever shows signs of having money; and Daesh militants who may still be hiding among the people.

"Daesh is still among us," said a businessman. To give an example, he said, a man lobbed a hand grenade at a recent funeral when mourners played music, something Daesh terrorists view as sacrilegious.

The Associated Press spoke to over a dozen residents on a recent visit, most of who spoke of their woes on condition of anonymity because they feared for their safety. The businessman asked to be identified by the diminutive of his first name, Abdu.

After fleeing Raqqa during the coalition-led assault on the city last year, Abdu returned once the militants were driven out in October. He found his restaurant and his home next to it destroyed. He was angry, but practical. His life has been on hold for too long and he wanted to get on with his business. So he hired workers and started to rebuild.

But local gangs had eyed him. He was kidnapped and held for $10,000 ransom, until his tribe intervened and rescued him without paying, he said.

He, like many others, lamented the loss of security, which he said was one prize feature of living under Daesh. He faulted the YPG forces for hastily recruiting local Arabs to boost their ranks and appease the local Arab tribes.

"We end up with thieves or former Daesh in the force," he said.

For three years, Raqqa was the de facto capital of the Daesh's "caliphate" stretching across much of Iraq and Syria. In the campaign of the U.S-led coalition and Iraqi and Kurdish partners, the group has been uprooted from almost that entire territory.

U.N. officials say Raqqa has been left the most devastated city in all of Syria's seven-year-old war, a conflict that has also seen Syrian regime forces backed by Russian and Iranian forces battling rebels. All of Raqqa suffered intense airstrikes by the U.S.-led coalition and the whole population of at least 350,000 had to flee. The infrastructure was destroyed, as were 65 percent of civilian homes, said Leila Mustafa, a member of the U.S.-backed Raqqa Civil Council that now runs the city.

A prominent Arab tribesman escorted the AP to see a building he owned that was gutted by airstrikes. He angrily complained that coalition bombing was indiscriminate. Like many, he said there should be compensation but didn't expect any would be given.

"I wish I even found the bone of a Daesh member in there! But nothing. No reason," he said. "Now, who will pay for this?" He refused to give his name, fearing his criticism would undermine his chances of ever getting money to rebuild.

Nothing is unaffected by the bombardment. Mosques, schools, squares and buildings have all taken hits, some repeatedly. Trees on the street are burned. Insects and dust saturate the air.

The stench of death rises from crushed buildings and remains long after the bodies are removed. Civil workers say they have pulled nearly 500 bodies from under the rubble in the past three months, working with just one bulldozer.

Some streets have been cleared of wreckage, giving way to a scene even more haunting because of how organized it is. Scrap metal and debris are neatly stacked in heaps at the foot of destroyed buildings. Row after row of buildings reduced to concrete skeletons run like a pattern through the city. Large chunks of cement dangle from twisted rebar above sidewalks like cryptic decorations. At least 8,000 explosives riddle the city center.

Major overpasses have been hit, as well as bridges across the Euphrates River, which cuts through the city. Residents and their cars cross on small barges.

Yet the buzz of activity is startling. Nearly 100,000 residents have returned, according to U.N. accounts. Mustafa said it was likely much higher.

Women in colorful scarves punctuated the grey monotone in the markets. A market for scrap metal has sprung up at one end of the city. Meat grills lined some streets, and warehouses were full of soft drinks, water, grains and other stock. Bulldozers drilled into the wreckage of buildings.

Workers from nearby provinces have come looking for opportunities. The driver of a truck full of mattresses with job hunters sitting on top said they came from the northwestern city of Aleppo.

"They can't do it all alone," a construction worker from the neighboring province of Deir el-Zour said at the site of a destroyed bridge.

Those with money rebuild. Painters added some color to the facade of a former car dealership. Its owner, who asked only to be identified as Ismail, said Daesh had used its back rooms as a prison.

When he came back to Raqqa, he heard of masked gangsters who rob returnees. But it has not stopped him. He is turning his dealership into an internet cafe, much needed in a city that has no phone lines and relies heavily on personal generators for electricity.

He said he paid $600 to clean the wreckage from his street. "I want to make it feel safe," he said.

Mustafa, the council member, said most of the restoration work was self-financed, with some U.S. money, though she would not say how much. On Thursday, with American officials attending, she inaugurated a new pre-fab bridge to connect the city to neighboring villages. One U.S. official said installing the bridge cost $7,000.

The city is getting "very limited" support — "no match to the size of the needs," she said. Infrastructure was totally destroyed, as were 65 percent of civilian buildings, and mines and rubble still need to be cleared, she said. She could not say the total cost for rebuilding since it is constantly being reevaluated.

Raqqa paid a "hefty price" for the war on terrorism, she said, but "international organizations and some countries didn't live up to their responsibilities."

The U.S. has worked to clear explosives, remove rubble, rebuild basic services and provide food and health aid to hundreds of thousands in Raqqa and around northeast Syria. But those programs would likely have to be called off if President Donald Trump goes forward with plans to withdraw American troops within five or six months. In meeting with national security aides, he has railed against the trillions the U.S. has spent in the Mideast, saying it brought no return.

Instead, Trump has asked Saudi Arabia to contribute $4 billion toward reconstruction and stabilization in Syria.

Despite the devastation, signs of IS remained around Raqqa.

The infamous Naim Square — Arabic for "Paradise" — where Islamic State militants displayed hanged bodies or heads, was empty aside from a single chair in the street that marked a former checkpoint of the militants. On the other end were remains of an IS media center with broken chairs and a stand where the screen was once set to show IS videos to the public.

A juice shop and a supermarket were the only signs of life in the square, surrounded by destroyed buildings. Seals used by IS were still visible on the metal shutters of shops, numbering them for tax collection purposes.

Asked how she is, she immediately said, "Everything is lost," and her eyes welled with tears. The war had impoverished her well-to-do family. Militants confiscated her husband's clothing store. The three homes they owned were destroyed in coalition strikes and she had multiple miscarriages, which she blamed on fear from the bombing.

She now makes clothes for a living and asks around houses for odd jobs. Looking at her purse, she said, "I have 3,000 liras ($7) in here. What do I do with this?" Her husband works in a grocery store, earning the equivalent of $45 a month.

"I am tired and I am scared," she said. "When will we be able to save to fix our homes — when (my husband) is 100?" Her son doesn't go to school because she worries about land mines.

"What will become of his future? What is our fault in all of this?"