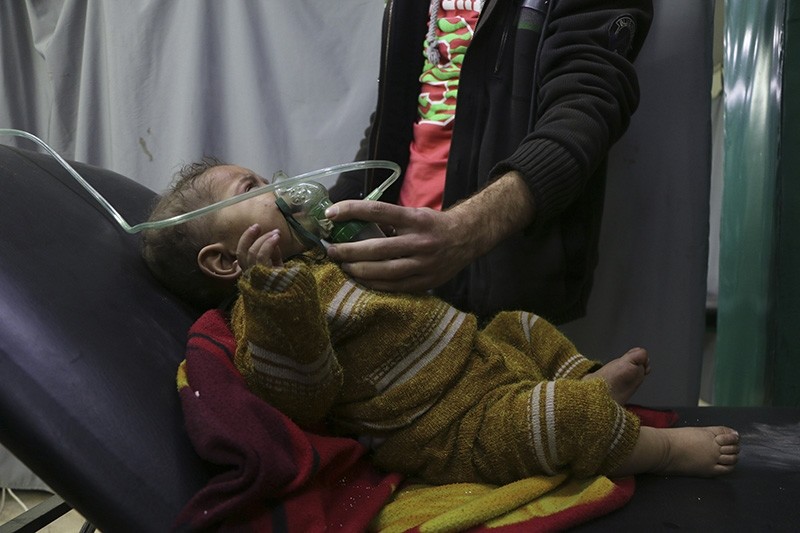 U.S. President Donald Trump condemned Monday the "heinous attack in Syria and said he was in talks with military leaders, adding that a major decision would be made in the next 24-48 hours.

When asked about a possible military action in Syria, Trump said "nothing is off the table."

"This is about humanity -- it can't be allowed to happen," Trump said, as he opened a cabinet meeting at the White House.

Previously on Monday, U.S. Defense Secretary James Mattis also said the United States has not ruled out military action against Syria's Assad regime in response the most recent chemical gas attack on civilians.

"I don't rule out anything right now," Mattis said while meeting with the emir of Qatar, Sheikh Tamim Bin Hamad Al-Thani, at the Pentagon.

U.S. government sources said that initial assessment suggested that nerve agent was used in the attack that has killed over 70 civilians in eastern Ghouta's Douma.

Syria and its ally Russia have denied any use of chemical weapons.

As U.S. officials consider whether and how to respond, they are looking at what type of chemical agent was used. When Trump ordered airstrikes last year after a chemical weapons attack, it was a response to the use of Sarin gas, which is banned by the Chemical Weapons Convention that Syria has signed. An attack with chlorine, which can be used as a weapon but is not outright banned by the treaty, could raise precedent issues, as there have been numerous recent allegations of chlorine attacks in Syria that have drawn no response from the Trump administration.

One year ago this month, Trump ordered dozens of cruise missiles to be fired at a Syrian air base after declaring there was no doubt Assad had "choked out the lives of helpless" civilians in an attack that used banned gases. White House advisers said at the time that images of hurt children helped spur the president to launch that air strike, and television new shows on Sunday aired similar depictions of suffering young Syrians.

On Sunday, Trump tweeted: "Many dead, including women and children, in mindless CHEMICAL attack in Syria. Area of atrocity is in lockdown and encircled by Syrian Army, making it completely inaccessible to outside world. President Putin, Russia and Iran are responsible for backing Animal Assad. Big price to pay. Open area immediately for medical help and verification. Another humanitarian disaster for no reason whatsoever. SICK!"

Republican Sen. John McCain of Arizona said Assad heard Trump's signal that he wanted to withdraw from Syria and, "emboldened by American inaction," launched the attack. In a statement, McCain said Trump "responded decisively" last year with the air strike and urged Trump to be forceful again to "demonstrate that Assad will pay a price for his war crimes.