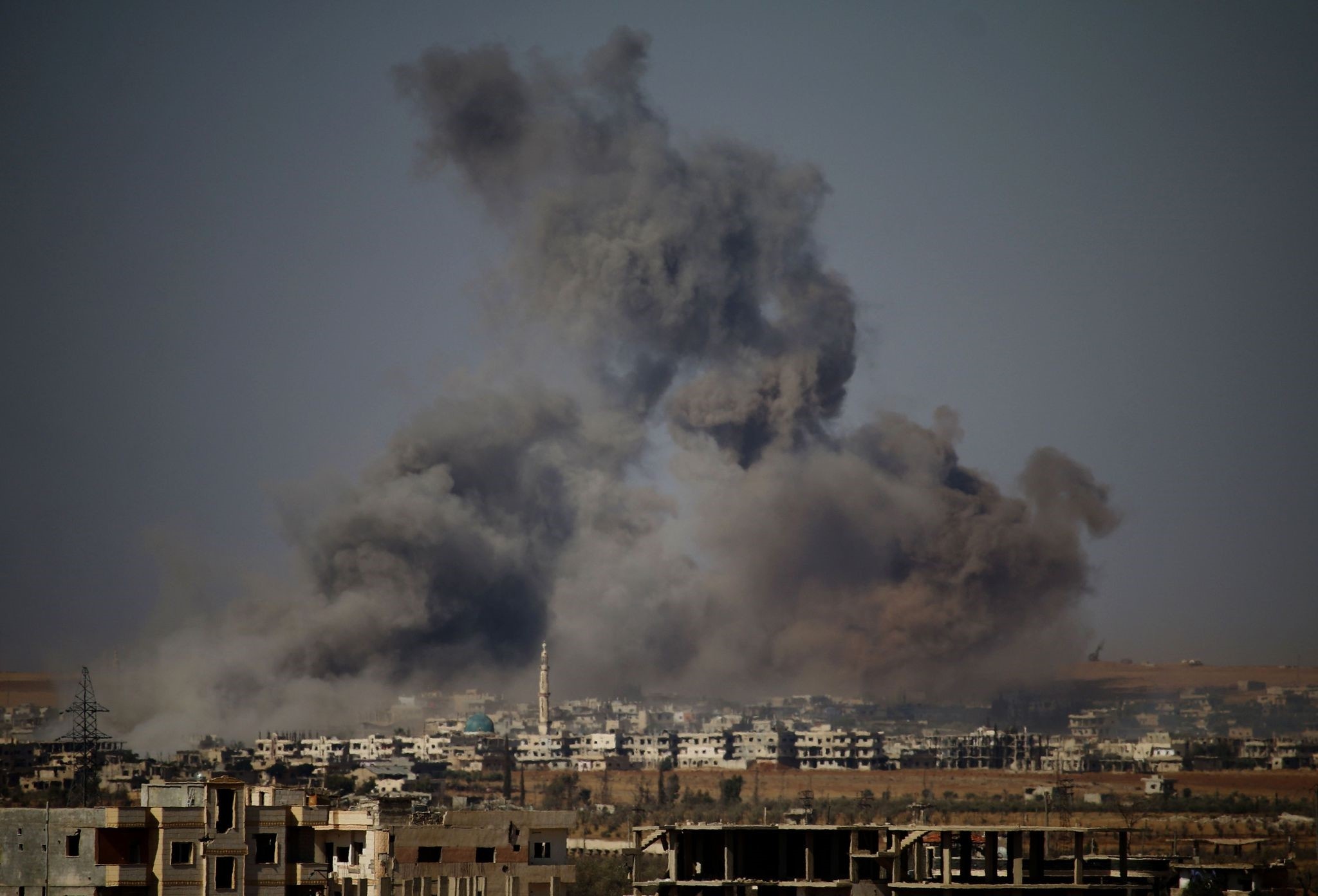 Smoke rises above an opposition-held town east of the city of Daraa during airstrikes by Syrian regime forces, June 30.
by Compiled from Wire Services
Jul 02, 2018 12:00 am

Opposition groups are pursuing talks with regime ally Russia over the fate of southern city of Daraa, which has been the target of intense air and ground attacks by Assad forces

The opposition Syrian Negotiations Commission (SNC) yesterday called on the international community to denounce the crimes against Syrians committed in the southwestern Daraa province. A statement from the SNC spokesman Yahya Aridi published on Twitter said: "We call on the international community to condemn the brutal breaching of the de-escalation zone in South East [sic] and take all possible measures to halt this assault on our people." The statement said Russia and Iran were violating the agreement they made and that it was "no surprise" that they proved to be "totally untrustworthy".

"The only solution is the political process agreed upon by the U.N. which the Security Council must protect," it said. "Stability cannot be imposed by force, it can be achieved only by negotiation," the statement added.

Meanwhile, talks have resumed between Syrian opposition and Russian negotiators over a peace deal in an opposition-held town in southwestern Syria after Jordanian mediation, an opposition spokesman said. A team representing the Free Syrian Army (FSA) held talks with Russian officers in the town of Busra al Sham, Ibrahim al Jabawi, the spokesman for the central operations room representing FSA negotiators told Reuters. Talks failed on Saturday after a meeting in which Russian officers met the rebel team and demanded a complete surrender, rebels said. Fighting and bombardment calmed overnight, the Syrian Observatory for Human Rights said, but reignited yesterday around Tafas, northwest of Deraa, along with heavy air strikes. Bashar Assad's offensive in the southwest aims to reclaim one of two remaining opposition strongholds in Syria, the other being Idlib and adjacent areas in the northwest. Assad's forces captured the last enclaves near Damascus and Homs earlier this year.Southwest Syria is a "de-escalation zone" of reduced warfare and bombardment agreed by Russia, Jordan and the United States last year. Washington warned it would respond to violations of this agreement, but has done nothing so far. Last week, rebels said the United States had told them not to expect any American military support.

Air strikes have pounded the region since the offensive ramped up two weeks ago, causing at least 160,000 people to flee their homes according to the United Nations.On Saturday at least 10 civilians were killed when bombs were dropped on the rebel-held village of Ghasam, relief workers said. The observatory says more than 100 civilians have been killed since an escalation in fighting on June 19.

Many who fled have sought refuge along the borders with Jordan and the Israeli-occupied Golan Heights. Both Jordan, which already hosts more than half a million Syrian refugees, and Israel, have said their borders will stay shut.

Civilians fleeing Syria's war will not be allowed to enter Israel, Prime Minister Benjamin Netanyahu said yesterday. "Regarding southern Syria, we will continue to defend our borders," Netanyahu said at the start of a cabinet meeting, as reported by Agence France-Presse (AFP). "We will extend humanitarian assistance to the extent of our abilities. We will not allow entry into our territory."