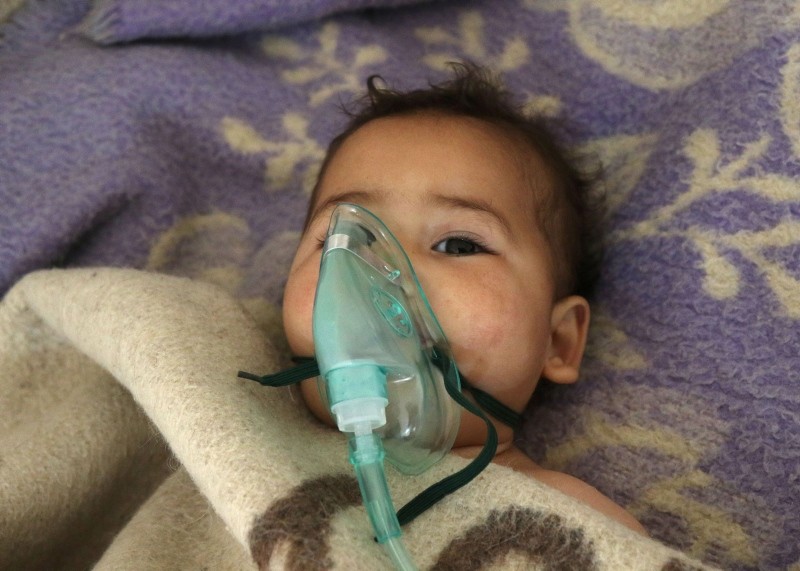 A Syrian child receives treatment at a small hospital in the town of Maaret al-Noman following a suspected toxic gas attack in Khan Sheikhun, a nearby rebel-held town in Syriau2019s northwestern Idlib province, on April 4, 2017. (AFP Photo)
by Associated Press
Jul 03, 2018 12:00 am

The Assad regime is still failing to answer questions about its chemical weapons program, years after becoming a party to the chemical weapons convention, members of the U.N. Security Council said Wednesday.

"There are a lot of uncertainties" in Syria's declaration to the Organization for the Prohibition of Chemical Weapons of its chemical weapons program, "and that is part of the problem," Skoog told The Associated Press after the meeting.

Britain's deputy U.N. ambassador, Jonathan Allen, said before the meeting that members would be discussing "how to ensure the Syrian regime dismantles their chemical weapons program."

The council meeting followed last week's 82-24 vote by OPCW member nations giving the international chemical weapons watchdog the authority to determine blame for chemical attacks for the first time, over strong objections from Russia and Syria.

The OPCW was created to implement the 1997 convention that banned chemical weapons, but it lacked a mandate to name the parties it found responsible for using them.

But Russia vetoed a Western-backed resolution in November that would have renewed the mandate of the Joint Investigative Mechanism, or JIM. Russian Ambassador Vassily Nebenzia said it "became a puppet in the hands of anti-Damascus forces."

The JIM accused Syria of using chlorine gas in at least two attacks in 2014 and 2015 and the nerve agent sarin in an aerial attack on Khan Sheikhoun in April 2017 that killed about 100 people and affected about 200 others. The Khan Sheikhoun attack led to a U.S. airstrike on a Syrian airfield.

The JIM also accused the Daesh terror group of using mustard gas twice in 2015 and 2016.

Bashar Assad said in an interview last month with Russia's state-controlled NTV television channel that his government got rid of all its chemical weapons in 2013 and that allegations of their use are a pretext for invasion by other countries.

But Syria has been accused repeatedly of using chemical weapons in the seven-year civil war, most recently in April in the town of Douma. The United States, France and United Kingdom launched air strikes in retaliation for that attack.

He welcomed the OPCW's decision last week to expand its mandate to determine responsibility for chemical attacks, calling it "a big step in the right direction."

In a related development, Van Oosterom said a group of "like-minded countries" are working to beef up the International, Impartial and Independent Mechanism established by the U.N. General Assembly in December 2016 to assist in the investigation and prosecution of people responsible for the most serious crimes since the Syrian conflict began in March 2011.

Last Thursday, he said, the group met with U.N. Secretary-General Antonio Guterres to discuss "sustainable financing" for the investigative body, and "to see what we can do with the files of the JIM, and in other ways help to ensure accountability."