Syrian opposition in fresh talks with Russia over peace deal 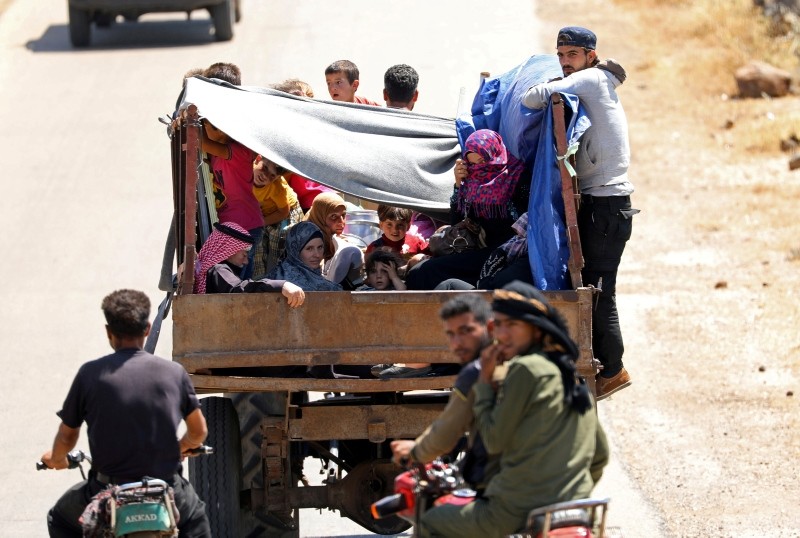 Internally displaced people from Deraa province ride on a back of a truck near the Israeli-occupied Golan Heights in Quneitra, Syria June 30, 2018. (Reuters Photo)
by reuters
Jul 03, 2018 12:00 am

Syrian opposition negotiators began a new round of talks with Russian officers on Tuesday over a peace deal in southern Syria under which they would hand over weapons and allow Russian military police to enter opposition-held towns, an opposition spokesman said.

Accompanied by a major Russian aerial bombing campaign, Syrian pro-regime forces have marched swiftly into opposition territory in Deraa province over the past two weeks.

Spokesman Ibrahim al Jabawi said the rebels had carried to the negotiating table their "response to a list of Russian demands" that include the handing over of weapons and settling the status of rebels in a deal that ends the fighting.

"Today they are carrying their response to the terms presented by the Russian officers," Jabawi said.

The Russian demands, handed to opposition fighters in a meeting in a town in southern Syria on Saturday, had prompted a walkout by the fighters, who said the terms amounted to a humiliating surrender. The opposition team was then persuaded by Jordan to go back to the negotiating table, diplomatic sources said.

The opposition negotiators have also agreed to expand their team to a 12-strong delegation after agreement among them to include the Quneitra province further west near the Israeli occupied Golan Heights, Jabawi said.

Previously they were negotiating for Deraa province to the east.

"A new expanded negotiating committee that represents all the south has been formed to reach an agreement to spare innocent lives and ensure the safety of civilians and fighters," said a statement by the central operations room in the south, representing the key opposition factions in that region.

The opposition camp has however been deeply split over the Russian demands, with some negotiators saying they wanted to continue the fighting and accusing some opposition commanders of cutting separate deals with the Russian military.

Opposition fighters and residents say that a string of opposition towns have worked out their own surrender arrangements that have allowed the Russian military police to enter their towns and patrol neighborhoods.