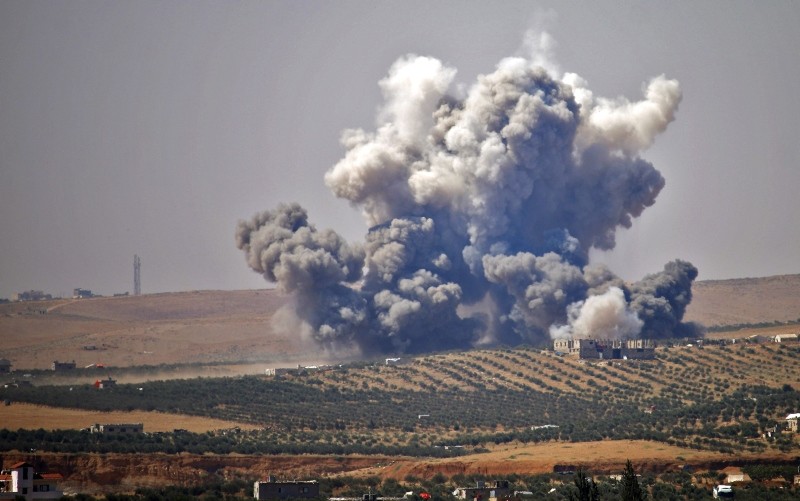 Smoke rises above rebel-held areas of the city of Daraa, during reported airstrikes by Syrian regime forces on July 5, 2018. (AFP Photo)
by Compiled from Wire Services
Jul 06, 2018 12:00 am

Syria's armed opposition has agreed with Russia to surrender its heavy weapons in the southern part of the country, an opposition spokesman said Friday.

Hussein Abu Shaimaa told Anadolu Agency that the deal also calls for the withdrawal of Bashar al-Assad regime forces from some of the towns and villages they recently captured.

The agreement further calls for Russian military police to gradually replace regime forces following the withdrawal of the latter from areas near the Jordanian border.

Under the terms of the arrangement, anyone wishing to leave the area once the deal takes effect will be granted safe exit.

Syrian civilians who the regime offensive in southwestern Syria's Deraa will be able to return to their homes with Russian guarantees of protection as part of a deal brokered by Russia on Friday, rebel sources said.

Russian guarantees will also be extended to rebel fighters who wish to "settle their status" with Bashar al-Assad's regime - a process by which former insurgents accept to live under state rule again, the sources said.

The army, which had deployed more armored vehicles in the area, has set in motion "contingency plans to face any eventuality" as the regime offensive closes in on the Nasib crossing, diplomatic sources said.

Reopening the crossing, a vital trade artery which has been in rebel hands since 2015, is a major objective of the regime campaign that aims to recover the entire southwestern corner of Syria from rebel foes of Bashar al-Assad.

But Jordan, a staunch ally of the United States, wants first to make sure that Assad's Russian allies play a central role in stabilizing southern Syria, fearing that any upheaval there will affect its own security, officials in Jordan said.

Jordan has always taken a cautious approach to the Syrian conflict that spiraled out of street protests against Assad's rule in 2011.

Though Jordan was an important sponsor of rebels in the south, analysts said this support was always aimed primarily at safeguarding its border from security threats such as Daesh militants, not toppling Assad.

Amman has played a leading role in getting Syrian opposition to agree to terms of surrender that include stationing of Russian military police in the south. Rebels hope the Russians will guarantee the safety of civilians from state retribution.

An official said Jordan is favorable to a Russian military police presence on parts of the border to help exclude Iranian-backed militias that have been supporting Assad's forces and which are seen as a menace by Amman.

The offensive campaign has created a new problem for Jordan in the shape of tens of thousands of civilians who have fled the offensive towards the border.

The United Nations has called on Jordan to open its border. Jordan, which is already hosting some 650,000 Syrian refugees, has refused so far, citing a combination of security and economic pressures.

The U.N. refugee agency says around 60,000 Syrians have gathered near the Nassib crossing. The total number of displaced by the offensive now stands at over 320,000 people.

Footage posted on social media of women and children pleading with King Abdullah to let them in has generated a wave of sympathy in Jordan with the plight of the newly displaced Syrians.

Syrian families have set up tents near the border in the hope Jordan will let them in. Some say they cannot contemplate returning to live under Assad's rule, and that they would instead storm the frontier.

"There is no option for us if we see them (the regime) getting close," said Omar Abu Hamed, who fled from Russian bombing in the town of Saida, which fell to regime troops on Thursday. He added that people feared persecution or worse.

Another displaced Syrian, Umm Zaid, a mother of five who had lost her husband in the latest offensive, said she would break through the fence if necessary, speaking to Reuters from the border area by phone.

General Mahmoud Freihat, Jordanian chief of staff, has warned the army will deter any threat to Jordanian security.

But "we cannot direct our arms towards a civilian or displaced (person) and we are dealing with this matter with caution", he was quoted as saying by a state newspaper.