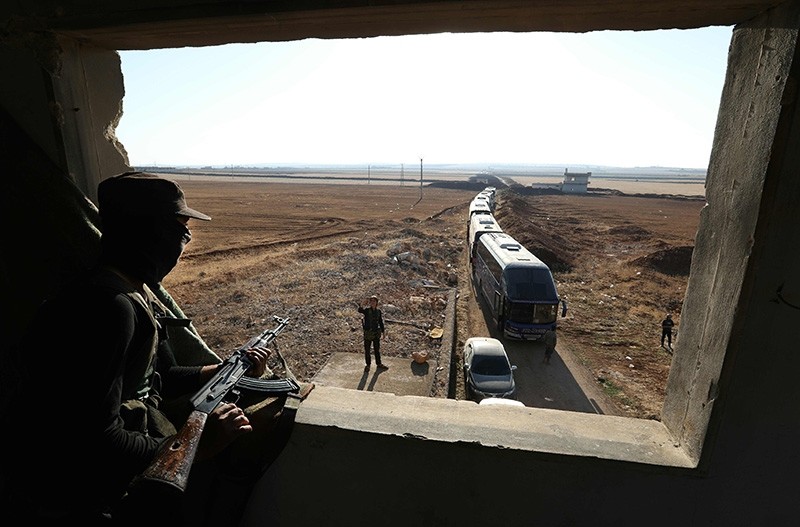 A member of Hayat Tahrir al-Sham group, led by Syria's former Al-Qaeda affiliate, watches as a convoy of buses gets ready to enter the towns of Fuaa and Kefraya to evacuate their residents on July 18, 2018. (AFP Photo)
by Compiled from Wire Services
Jul 19, 2018 12:00 am

Talks to cede the largest opposition holdout in southwestern Syria to the regime have failed, triggering an intense overnight bombing campaign on the densely populated town of Nawa that killed over a dozen people and injured over a hundred, activists and rescuers said yesterday.

Britain-based Syrian Observatory for Human Rights said an overnight 'frenzied' bombing campaign in the southwestern town of Nawa and its surrounding areas continued into yesterday, with at least 350 missiles launched. The Observatory said at least 12 were killed as rescuers struggled to get to the casualties.

Khaled Solh, head of the local Syria Civil Defense known as White Helmets, said they have documented 14 killed while Nawa's only hospital was bombed and rendered non-operational late Tuesday. He said only one ambulance was able to access the town and civilians relied on their cars to bring out at least 150 injured. He said one of the last orthopedists in the town was killed in the strikes.

Separately, buses began evacuating fighters and civilians from two besieged pro-regime towns in northwestern Syria early on Thursday morning, under a deal that will allow thousands to leave after three years of encirclement.

An AFP correspondent counted 20 buses driving out of Fuaa and Kafraya, the last two remaining towns under siege in the war-torn country. The evacuations come as part of a deal reached between Turkey and regime-ally Russia, according to the Syrian Observatory for Human Rights.

Both militiamen and regular civilians could be seen on board the vehicles, as well as stacks of personal belongings.

All residents -- about 6,900 people including fighters and civilians -- are expected to be bused out, said the Britain-based monitor.

In exchange, the Syrian government is expected to release hundreds of prisoners from its detention centers.

The towns came under siege in 2015 as opposition forces and terrorist groups overran the surrounding province of Idlib, cutting off access to food and medicine.

Starting early Wednesday, a series of barricades on the road leading into the town were removed to let dozens of vehicles in, an AFP correspondent there said.

State news agency SANA also reported that buses and ambulances had entered the towns under the deal.