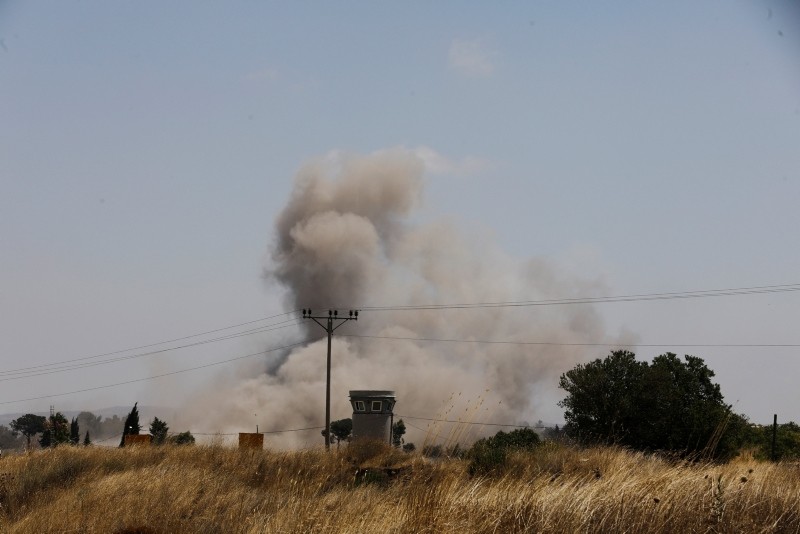 Smoke can be seen following an explosion near the Quneitra border crossing between Israel and Syria, as seen from the Israeli-occupied Golan Heights July 21, 2018. (Reuters Photo)
by Compiled from Wire Services Jul 21, 2018 12:00 am

Syrian regime forces were in control of most of southwestern Quneitra province, near the Israel-occupied Golan Heights, after a Russian-brokered deal with opposition fighters was reached, a war monitor reported on Saturday.

Regime forces and loyalists have expanded their presence in Quneitra, retaking control of the province except for its northern sector, the Syrian Observatory for Human Rights added.

Under the agreement mediated by Syria's ally Russia, opposition fighters agreed to hand over Quneitra to the Syrian regime and surrender their heavy weapons.

The accord also allows the safe departure of fighters who are opposed to the deal to opposition-controlled areas in northern Syria.

The pact marks a major victory for Bashar al-Assad, who has recovered large swathes of territory in the war-torn country's south in a Russian-supported onslaught launched last month.

On Friday, some 2,800 opposition fighters and their families left Quneitra for the north-western province of Idlib.

Twenty-five buses on Saturday arrived at a crossing point in rural Quneitra to evacuate a new group of opposition fighters and their families, according to the observatory.

"More than half of the evacuees are women and children," Observatory head Rami Abdel Rahman said.

The evacuations follow a deadly regime offensive on Quneitra, a thin, crescent-shaped province that lies along the buffer zone with the Israel-occupied Golan to the west.

The Russia-negotiated opposition surrender also saw fighters hand over heavy and medium weapons and the return of regime institutions to the area.

Regime forces launched their southern offensive on June 19, targeting the province of Daraa on the border with Jordan, before turning their attention to neighboring Quneitra.

With a mix of military power and negotiated surrenders, Assad's troops this month captured more than 90 percent of Daraa, where protests against him first erupted in 2011.

Regime forces backed by Russia have continued their campaign in Daraa, aiming to retake areas still controlled by the Daesh terrorist group, which are not party to the Russia-backed withdrawal deals.

The deadly raids came just a day after strikes in the same area took the lives of 26 non-combatants including 11 children.

On Saturday, clashes between loyalists and terrorists in the area also killed 13 regime fighters, including eight in a car bombing.

Assad's war against the opposition has tilted in his favor since Russia militarily intervened in his support in 2015.

Syria's conflict has killed more than 350,000 people and displaced millions since it began in 2011 with a brutal regime crackdown on protesters.