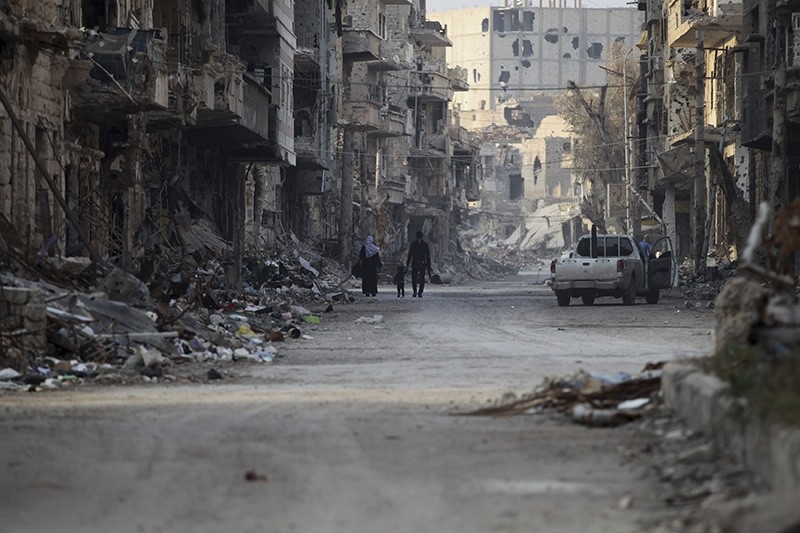 A Free Syrian Army fighter walks with his family through damage and debris along a street Deir el-Zour, eastern Syria Nov. 29, 2013. (Reuters Photo)
by Daily Sabah with Agencies Sep 09, 2018 12:00 am

The air strikes targeted the village of Hadjin and resulted in fires, but there was no information about casualties, the Russian military said.

"These strikes resulted in fierce fires. We are clarifying the information concerning possible deaths and injuries," he added.

A Pentagon spokesman denied that U.S. planes dropped phosphorus bombs. "At this time, we have not received any reports of any use of white phosphorous," said Commander Sean Robertson. "None of the military units in the area are even equipped with white phosphorous munitions of any kind."

The usage of white phosphorus is prohibited by an additional protocol to the Geneva Convention of 1949. The bombs can create thick white smoke screens and are used as incendiary devices. The rights groups criticize use of the munitions in populated zones because they can kill and maim by burning people to the bone.

Both the U.S. and Russia have been accusing each other of using chemical weapons in Syria. The accusations have escalated recently as the chances of an offensive in Idlib by the Syrian regime are increasing.

Russian and Syrian jets resumed strikes in Idlib and Hama on Sunday as Damascus stepped up its assault after a Turkish-Russian-Iranian summit failed to agree on a ceasefire.

International actors have warned the Assad regime and its backers, Russia and Iran, to hinder the offensive on Idlib due to the possibility of a humanitarian catastrophe that would cause massive casualties and a new refugee wave. The Syrian regime is already known for its usage of chemical attacks. In April, the Syrian Network for Human Rights (SNHR) said that Syrian regime forces carried out 215 chemical attacks against the opposition since 2011.

The use of chemical weapons has become systematic in Syria's seven-year war, but political rifts between Western powers and Russia have hamstrung the United Nations and the Organization for the Prohibition of Chemical Weapons (OPCW), leaving them unable to act against violations of international law.