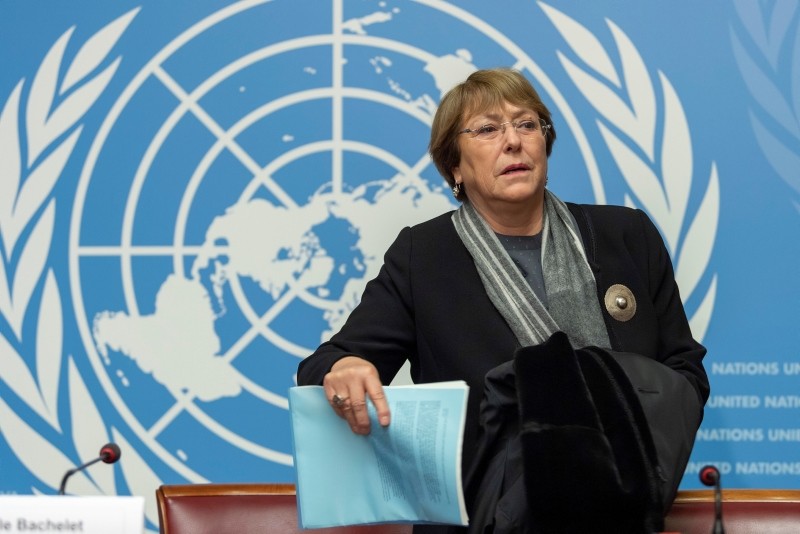 U.N. High Commissioner for Human Rights Chilean Michelle Bachelet, arrives for a press conference about the 70th anniversary of the Universal Declaration of Human Rights in Geneva, Switzerland, Dec. 5, 2018. (AP Photo)
by Daily Sabah with Reuters Dec 05, 2018 12:00 am

Speaking to a news conference in Geneva, Bachelet voiced deep concern for 7,000 civilians who she said were trapped between Daesh fighters preventing them from leaving Deir el-Zour and air strikes by a U.S.-led coalition.

"We also have reports of [Daesh] executing people perceived as cooperating with the SDF or other parties to the conflict," she said, adding that civilians were being used as "pawns and bargaining chips" in the conflict.

The Syrian Democratic Forces (SDF) is led by the PKK terrorist group's affiliate the People's Protection Units (YPG), which is heavily backed by Washington under the pretext of fighting Daesh. Turkey sees no difference between the PKK, a group also listed on U.S. and EU terror lists, and the YPG in Syria, as the two groups are organically linked and have fluid movement of members between their lines.

Taking into consideration that Daesh has receded as an immediate threat, the U.S.' insistence on supporting the YPG has raised questions in Turkey.