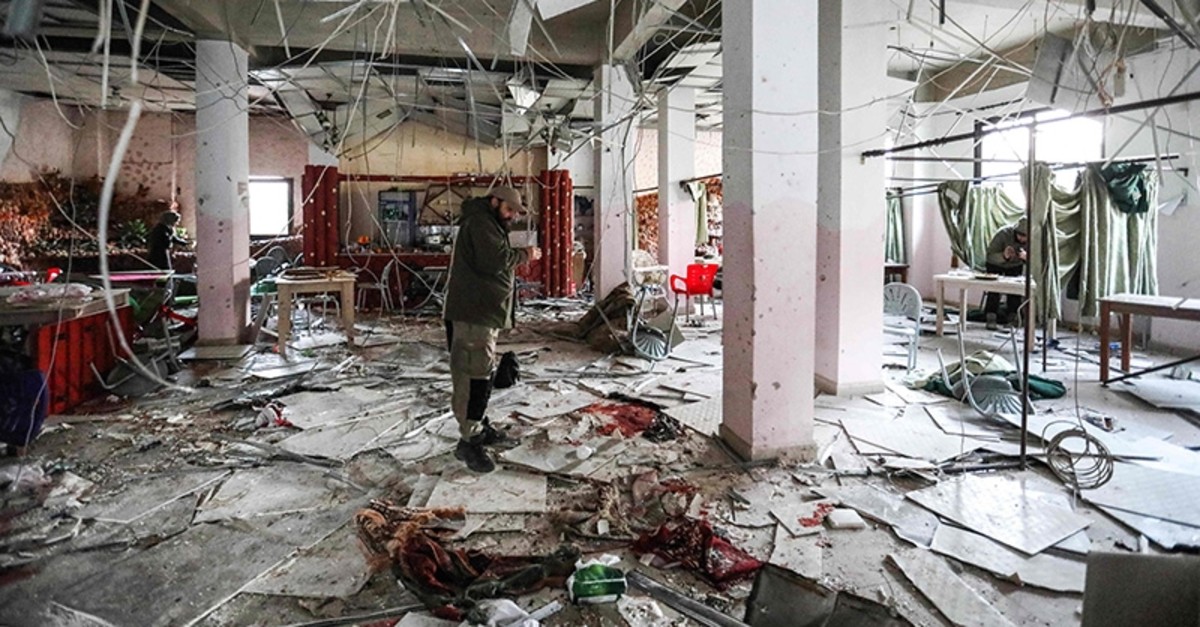 A man inspects damage and destruction at a restaurant following a reported suicide attack in the opposition-held northern Syrian city of Idlib on March 1, 2019. (AFP Photo)
by Daily Sabah with AFP Mar 01, 2019 7:48 pm

At least seven people were killed in suicide bombing at a restaurant in Syria's northwestern Idlib on Friday.

The Idlib head of the Syrian civil defense volunteers, also known as the White Helmets, Mustafa Hajj Yusuf, told an Anadolu Agency correspondent that dozens more were injured in the attack.

The White Helmets teams are continuing search and rescue operations, while the wounded have been transferred to nearby hospitals, Yusuf said.

The Syrian Observatory for Human Rights said eight people were killed and 22 wounded in the explosion that hit a restaurant frequented by foreign terrorists, including Europeans and Uzbeks.

At least five foreign fighters were among those killed in the blast, but their nationalities are not known, Observatory head Rami Abdel Rahman told AFP.

He said terrorists had tried to open fire on the suicide bomber, who still managed to detonate his explosive belt inside the restaurant.

There was no immediate claim of responsibility but Abdel Rahman said the bomber was believed to be a member of the Daesh terror group.

Daesh is known to have sleeper cells in the area.

An AFP correspondent saw blood spattered on the floor of the wrecked restaurant.

HTS took administrative control of the whole of the region last month, after overpowering smaller opposition groups that are backed by Turkey.

Idlib has been protected from a massive offensive by Bashar Assad's regime since September, thanks to a buffer zone deal agreed by Damascus' ally Russia and opposition-backer Turkey.

But it has been hit by sporadic regime shelling that has killed scores of civilians.

Eight years into a multi-faceted conflict that has killed more than 360,000 people, the Assad regime has wrested back large swathes of territory to control around two-thirds of the country.